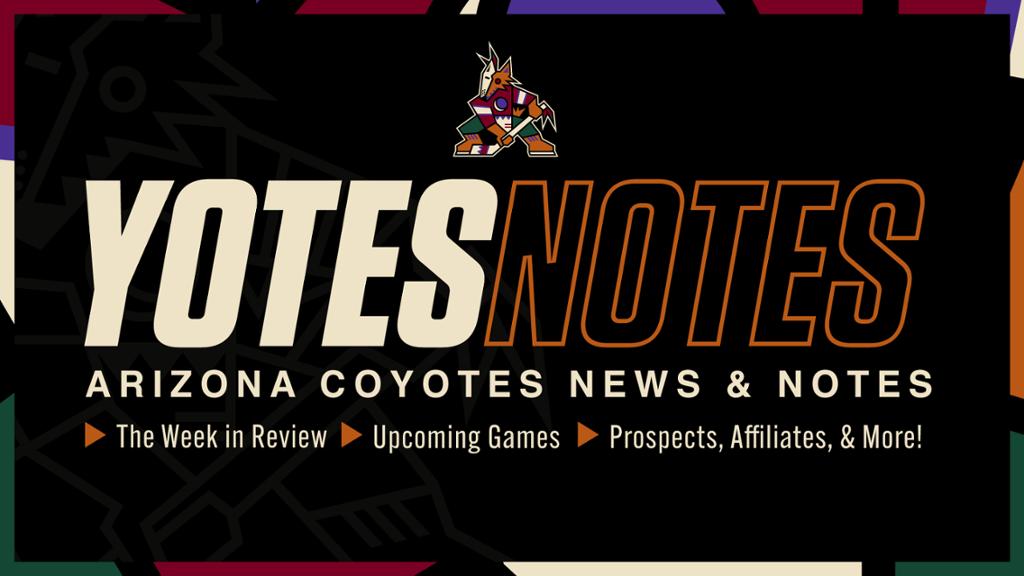 The Arizona Coyotes have been tough to beat at home so far this season, and that was on display yet again with consecutive victories over the Los Angeles Kings, Colorado Avalanche, and Toronto Maple Leafs at Mullett Arena.

The team is 7-3-2 in 12 games at home this season, including a 6-1-1 mark over its last eight. Forward Nick Bjugstad raved about the environment at Arizona’s temporary home following Thursday’s win over Toronto.

“We’re a hard team to play against, and teams don’t like coming into The Mullett,” Bjugstad said. “It’s a different rink to play in for a lot of people, and we try to use it to our advantage. We’re having some fun with it.”

Jack McBain‘s two goals in that very game marked his first career multi-goal game, and his go-ahead tally in the third period (more on that later) sent the crowd, which included Vince Vaughn and Michael Phelps, into a frenzy.

The Coyotes are currently on the road for four straight before returning home on Sunday to face the Pittsburgh Penguins.

On to the show!

The Week in Review

The Coyotes ended their three-game homestand on a high note, closing it out a perfect 3-0-0 with a 6-3 win over the Maple Leafs. In one of the more eye-opening statistics, Arizona has beaten Toronto four straight games and is 18-4-2 against the Leafs dating back to Jan. 14, 2008.

Jack McBain led the way with two goals, while Barrett Hayton capped off a three-point night with an empty-netter to put the game out of reach. Karel Vejmelka made 29 saves to earn his 11th win of the season.

Nick Bjugstad, Jakob Chychrun, and J.J. Moser also scored for the Coyotes, who continue to impress inside the friendly confines of Mullett Arena.

Arizona wrapped up 2022 in Tampa Bay, dropping a 5-3 decision to the Lightning on New Year’s Eve. Travis Boyd, Christian Fischer and Nick Bjugstad scored as the Coyotes jumped out to a quick 2-0 lead in the game before Tampa rallied for the win.

Down on the Farm

Dec. 29: Jack McBain scores on a 2-on-1 break to give the Coyotes a 4-3 lead over the Maple Leafs. Arizona went on to win 6-3, marking its fourth straight win over Toronto.

“He played with a lot of passion. He was physical. He was very fast. He won a lot of battles. He was one of our best players tonight.” André Tourigny on Jack McBain following the Coyotes’ 6-3 win over the Toronto Maple Leafs on Dec. 29.

What to Watch For

Arizona’s second stop on its four-game road trip is in Sunrise, Fla. against the Panthers. Florida has dropped two straight games by a combined score of 9-3 and has lost five of its last six.

The Coyotes won the first matchup between the two teams 3-1 at Mullett Arena on Nov. 1, which was their first home win of the season.

The Panthers are led by Matthew Tkachuk’s 43 points and 26 assists, while Carter Verhaeghe’s 18 goals are tops on the team. Goalie Sergei Bobrovsky has appeared in 23 games, posting an 8-12-1 record with a 3.32 goals-against average and .894 save percentage over that time.

The Flyers have won two straight at the time of this post, with a game still in hand at Anaheim on Monday before hosting Arizona on Thursday. Though Philadelphia is seventh in the Metropolitan division, it is 4-4-2 in its last 10 games.

Travis Konecny is the team’s leader in both points (35) and goals (18), and Kevin Hayes has notched 21 assists on the season. Goalie Carter Hart is expected to return to the lineup after missing some time while in concussion protocol, and has done the lion’s share of work in Philly this season (10-11-6, 2.89 GAA, .911 SV%).

The 24-year-old already has 173 games of NHL service to his name, all with the Flyers.

Felix Sandstrom had previously been backing up Hart, posting a 1-6-1 record with a 3.37 GAA and .888 SV%. That said, rookie Samuel Ersson made his NHL debut while Hart was out, earning his first NHL win(s) in the process. He’s 2-0-0 with a 3.58 GAA and .885 SV% in three appearances, and was in net for each of the Flyers’ last two victories.

The Blackhawks are a league-worst 8-24-4 and have lost 20 of their last 22 games. They’ll host the Lightning before Arizona visits on Friday for the first of four meetings between the Central Division opponents.

Chicago has used four goalies throughout the season, but Petr Mrazek and Alex Stalock are the ones listed on the team’s active roster as of the time of this post. Mrazek is 2-10-1 in 14 games with the Blackhawks this season, while Stalock is 4-4-1 with a 2.73 GAA and .918 SV%.

Stalock has earned the team’s only win in over its last 14 games.

The Penguins caught fire earlier this season, winning 14 of 16 games from Nov. 17 – Dec. 15, but have come back down to earth slightly after dropping five of their next six games (two in overtime). Pittsburgh plays the Boston Bruins (in the 2023 Winter Classic) and the Vegas Golden Knights on the road before visiting Mullett Arena on Jan. 8, in what will be Arizona’s first home game since Dec. 29.

Though the Penguins’ offense has dipped slightly, but their goals-for per game is still 10th in the league (3.33), and they still have some of the game’s most dynamic players in Sidney Crosby and Evgeni Malkin.

Crosby leads the team in points (43) goals (19) and assists (24), and the 35-year-old forward doesn’t look to be slowing down any time soon. Malkin’s 34 points are second on the team, and the duo has played a combined 2,161 regular season games for the Penguins.

Tristan Jarry and Casey DeSmith have split time in net this season, with Jarry posting a 15-5-4 record and DeSmith going 4-6-2. Jarry’s 2.78 GAA and .917 SV% are tops on the team, and the 27-year-old netminder has appeared in 24 games for the Penguins this season.

In Case You Missed It