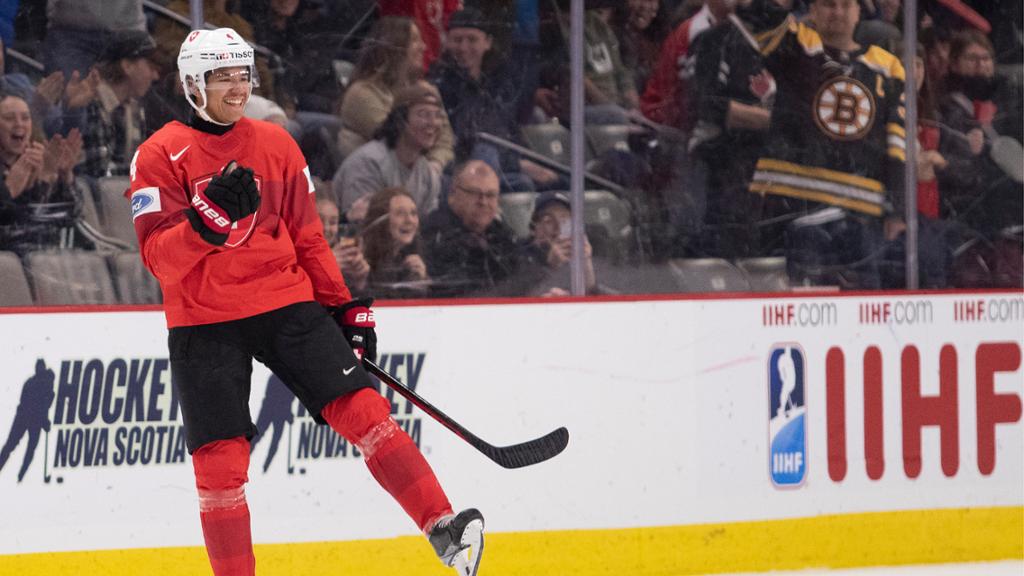 All games on NHL Network in U.S., TSN in Canada

Finland will need to pick up the pace on offense as it ranks fifth in the tournament in goals (12) and fifth on the power play (18 percent; 2-for-11). Forward Sami Paivarinta (2023 NHL Draft eligible) is the only player with at least four points, and there are four with at least three points, including Nashville Predators prospect Joakim Kemell (two goals, one assist). “Our loss against the U.S. was like a wake-up call; we all saw what happened,” Finland coach Tomi Lamsa said. “That’s the level where we have to get to now, when all these best teams are left. This is the level we need to find and it means we need to take a few more steps right direction against Sweden.”

Czechia vs. Switzerland (1:30 p.m. ET) — Czechia earned the top seed in Group A after an 8-1 win against Germany on Saturday, marking the first time it finished first in pool play since 2001. Czechia ranks second in the tournament in goals (24) and has been led by forward David Spacek (Minnesota Wild; six points, three goals) and defenseman Stanislav Svozil (Columbus Blue Jackets; six points, one goal). “We have a lot of players who play in the CHL and on small rinks and I everybody knows how to play in specific areas of the rinks and that helps a lot,” Spacek said.

Switzerland, meanwhile, won all three of its games in extra time and is confident bunch after a 4-3 shootout win against Slovakia on Saturday. “We showed everyone we can beat the big countries … it doesn’t matter who we play,” Switzerland defenseman Rodwin Dionicio said. “We’re going to stick to our system, play our game. We’re going for it.” Switzerland forward Attilio Biasca (2023 draft eligible) has two goals, four points and averages 23:25 of ice time.

United States vs. Germany (4 p.m. ET) — The United States, third in the tournament with 19 goals, finished first in pool play for the second straight year; it lost to Czechia in the quarterfinal round at the 2022 WJC. The United States has been bolstered by a puck-moving defense corps that includes Luke Hughes (New Jersey Devils), tied for the tournament lead for goals (three) by a defenseman, Sean Behrens (Colorado Avalanche), Ryan Ufko (Nashville Predators) and Lane Hutson (Montreal Canadiens). Forward Logan Cooley (Arizona Coyotes) has a point in every game for the United States and is tied for third in tournament scoring with University of Minnesota teammate Jimmy Snuggerud (St. Louis Blues) with seven points.

Germany has scored the fewest goals (eight) and has the lowest power-play percentage (6.25 percent) of the eight teams that qualified for the quarterfinals. “It’s a big thing for Germany to be in the quarterfinals, but we’re not done yet,” said Germany captain Bennet Rossmy (2023 draft eligible). “I think we can move on if we just work hard, put pucks on the net, and do the little things right.”

Canada vs. Slovakia (6:30 p.m. ET) — Canada leads the tournament in power-play goals (12) and power-play percentage (57 percent). Forward Connor Bedard, the projected No. 1 pick in the 2023 draft, has either scored or assisted on 17 of Canada’s past 27 goals (five goals, 12 assists) and leads the tournament in goals (six), assists (12), points (18) and a plus-11 rating. The record for most points in a single World Juniors was set by Hockey Hall of Famer Peter Forsberg at the 1993 WJC (31 points in seven games). Bedard is two points from becoming the seventh player in WJC history to reach 20 points (Forsberg, Markus Naslund, 1993; Raimo Halminen, 1984; Robert Reichel, 1990; Vladimir Ruzicka, 1983; Esa Keskinen, 1985). “Bedard’s confidence level is through the roof right now and the key in this game is having confidence and having a positive mindset,” Canada forward Brennan Othmann (New York Rangers) said. “He takes everything super easy at such a young age. He’s going to be an outstanding NHL player in the future. He’s lighting up a tournament right now that’s hard to light up.”

What We Learned on Day 6

Rodwin Dionicio (2023 NHL Draft eligible) transitioned to defense four seasons ago while playing in his native Switzerland, but that didn’t mean he lost his flair for some offensive swagger.

The 18-year-old, who plays with Niagara of the Ontario Hockey League, proved it in the 10th round of shootout when he flicked a one-handed (right) shot through the five-hole in a 4-3 upset of Slovakia at Avenir Centre.

“I actually saw that move before from the Nashville Predators camp over the summer,” Dionicio said. “Joakim Kemell did it at camp. I saw it and I just took it off from him and it worked, so that’s all that matters.”

Dionicio said he practiced the move Friday not knowing he’d have to pull it off a day later.

“I actually didn’t practice the move a lot, but I tried it out [on Friday] and I was confident with it,” he said. “I just decided to go with what works.”

Dionicio has seven points (four goals, three assists) in 17 games this season with Niagara, which selected him No. 18 in the 2021 Canadian Hockey League import draft.

“I played forward four years ago with Bern in Switzerland’s junior division, so this is my fourth year on defense and that’s why I always have the offensive mindset,” he said. “It was a really long shootout, so I took the opportunity for my team, and it was pretty cool in the end.”

The three had their best showing of the tournament when it mattered most, combining for eight points (two goals, six assists) in a 6-2 win against Finland at Avenir Centre. Snuggerud, who plays right wing, led the way with four points (one goal, three assists). Cooley, the center, had three points (one goal, two assists).

Snuggerud and Cooley are teammates at the University of Minnesota.

“I thought they were excellent,” United States coach Rand Pecknold said. “I think a big thing for them was we were rolling four lines most of the night (against Finland). So when they were getting on the ice, they were fresh, they were energized, and their shift lengths were excellent. They were changing on time and getting rewarded for that when they get out there. They’re getting out there against tired players and they’ve got a lot of jump in their step.”

Snuggerud (four goals) and Cooley (two goals) are tied for the team lead with seven points each and Gauthier, a freshman at Boston College, is third (five assists).

Pecknold said Gauthier has been one of the more pleasant surprises throughout the tournament.

The eight countries that qualified for the quarterfinal round all have one thing in common — goalies capable of stealing a game.

At the top of the list is Finland’s Jani Lampinen (1.00 goals-against average, .933 save percentage in two games), who will likely face Sweden’s Carl Lindbom (1.74 GAA, .941 save percentage, four games) in that quarterfinal showdown.