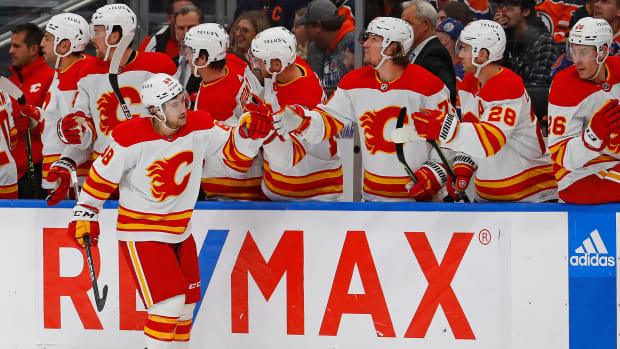 When THN’s web team was asked to make some pre-season NHL predictions last week, and the question was which team would win this season’s Presidents’ Trophy as the best regular-season team in the league, there were two teams that got the most attention: the first team was the Carolina Hurricanes – a team that this writer picked to win the 2022-23 Stanley Cup – and the defending Cup-champion Colorado Avalanche also were a popular choice.

However, while we think the Canes will win the post-season, we didn’t pick them or the Avs to be the NHL’s top team over the course of 82 games. Instead, we went with a team that underwent a dramatic change this past summer, despite the fact they were the league’s sixth-best franchise in 2021-22: the Calgary Flames.

Although Calgary has played only a pair of games so far this year, they’ve shown themselves more than capable of being a dominant group.

In their season opener, the Flames hosted the Avalanche and beat them 5-3. Two nights after that, they went into Edmonton and beat their arch-rivals 4-3. While Calgary wasn’t perfect in either game, they came away with victories over two of the NHL’s best teams and served notice that the bar for them this season couldn’t be higher.

As noted above, the Flames were the one team in last season’s top 10 regular-season teams that underwent major roster alterations. The Canes also made some big moves, but no team other than Calgary had their top two offense contributors leave town, and yet ended the off-season with an equally-dangerous squad.

Flames GM Jim Treliving could’ve buckled under the pressure when star forwards Johnny Gaudreau and Matthew Tkachuk departed (via free agency and a trade, respectively), but instead, he made the most of his newfound salary cap space and added not only two high-impact forwards in Jonathan Huberdeau and Nazem Kadri, but also bolstered his defense with the addition of MacKenzie Weegar. That is no small feat.

And now, Calgary has an excellent top-four defense unit that has a lot of size – three of them are at least 6-foot-3 – and smarts.

The Flames also have a collection of forwards that’s shown early on they can provide goalie Jacob Markstrom with enough offense to win games far more often than not.

Calgary also happens to be the best team in a Pacific Division that, while more competitive than last season, still is arguably the weakest division in the league. They’ve got three games against Seattle, four games against San Jose, and four games against Anaheim. Those are all going to be winnable games for them, at least on paper. In what will likely be a very close race for the Presidents’ Trophy, those Pacific games could be what puts Calgary over the top and guarantees them home-ice advantage in the playoffs.

The Flames also are one of the best-coached NHL teams out there. Darryl Sutter won last season’s Jack Adams Award as the top bench boss in the league, and he once again has all kinds of talent to work with again this year. Post-season success may remain an issue for Calgary this year, but we do see them getting out of the first round and maybe making it to the Western Conference final. However, we picked the St. Louis Blues to make it to the Cup final.

Still, it wouldn’t surprise us at all if the Flames won the West. With Kadri and Sutter, they have Cup-winning experience. With Huberdeau, Weegar, Elias Lindholm and Andrew Mangiapane, they have talented veterans hungry for their first taste of championship success.

Like all teams, they’ll probably have short stretches where things don’t go their way, but Calgary ultimately has the depth and desire to win the Presidents’ Trophy and confirm what many of us suspected: this is an elite collection of talent. There’s no reason why they can’t outlast other Presidents’ Trophy contenders and win that honor for the first time since back-to-back wins in 1988 and 1989.