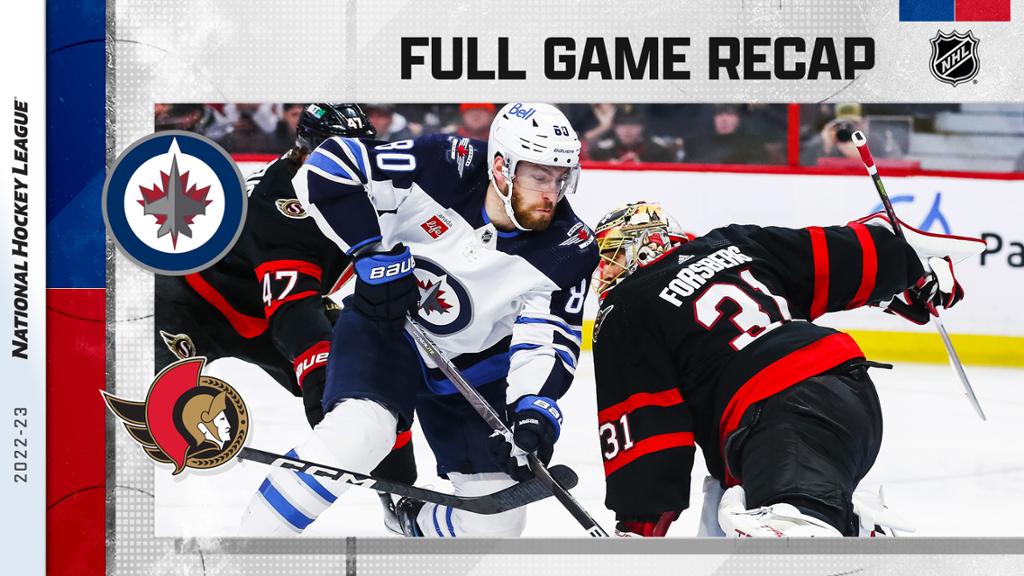 OTTAWA — Blake Wheeler had three points, including his 900th in the NHL, for the Winnipeg Jets in a 5-1 win against the Ottawa Senators at Canadian Tire Centre on Saturday.

“We challenged [our best players] this morning because we needed a little bit more out of them,” Winnipeg coach Rick Bowness said. “They responded.”

Mark Scheifele had two goals and an assist, and Nikolaj Ehlers had a goal and two assists for the Jets (30-16-1), who had lost two straight. Connor Hellebuyck made 25 saves.

“You want some of those saves. They were timely saves,” Bowness said of Hellebuyck’s performance. “He made some big ones. Listen, this kid is great to be around. I love his attitude and his enthusiasm. He’s a great goalie and he’s a great competitor.”

Video: [email protected]: Perfetti fires in PPG from an angle

Josh Norris scored for the Senators (20-23-3), who were coming off a 4-1 loss at the Pittsburgh Penguins on Friday. Anton Forsberg made 25 saves.

“We’re going to shuffle the top nine,” Ottawa coach D.J. Smith said. “I mean, there’s guys that are minus every night, and it just can’t continue. That’s on me for allowing them to keep playing together or certain guys to play together, and if you’re getting scored on, it’s not working. So we’re going to work on every line, and we’re going to grind our way out of this.”

Ehlers gave Winnipeg a 1-0 lead at 6:58 of the first period when he received a cross-slot pass from Josh Morrissey and beat a sprawling Forsberg on a power play. Ehlers has 13 points (four goals, nine assists) in nine games since returning from sports hernia surgery that caused him to miss 36 games.

“He’s a fantastic player for us, and he played great for us tonight, too,” Scheifele said of Ehlers. “We need him with his A game for us to win. He was fantastic again tonight, and still only a few games in from him coming back.”

Norris tied it 1-1 at 11:12 with a quick shot off a face-off win by Claude Giroux. It was his first goal in three games since returning from a shoulder injury that caused him to miss 38 games.

“We definitely know we can play better,” Giroux said. “I’m trying to wrap my head around what happened tonight, and we had some times during the game where we played good and sometimes we didn’t and they came back at us.”

Scheifele one-timed a cross-ice pass from Kyle Connor to make it 2-1 at 5:00 of the second period. The assist was Connor’s 400th NHL point.

“It’s not good,” Senators defenseman Thomas Chabot said. “No one’s happy right now, but, I mean, it’s the game of hockey and they were the better team tonight, and that’s it.”

Wheeler gave the Jets a 3-1 lead at 13:09 when Ehlers’s rebound bounced in off his shin pad.

“We talked about it before the game, we need a greasy goal here from our forwards,” Bowness said. “And then [Wheeler] goes to the net, [Ehlers] puts it in around there, and [Wheeler] gets his screws in. We haven’t had one of those for a while. You just need one of those sometimes to get you going 5-on-5.”

Scheifele tapped in a centering pass from Axel Jonsson-Fjallby to make it 4-1 at 16:07 of the third period.

Cole Perfetti scored short side on Forsberg on a power play at 18:17 for the 5-1 final.

“Our PK was great, power play produced, and we were good 5-on-5,” Morrissey said. “That’s a good recipe. They play hard, they play a physical game, and we didn’t back down. We took the play to them for a lot of the game.”

Winnipeg was 2-for-8 on the power play and 4-for-4 on the penalty kill.

NOTES: With his 167th NHL goal, Ehlers passed Frans Nielsen for the most goals by a Danish player in NHL history. “Highest scoring Dane, good for him,” Bowness said. “He’s been playing great since he came back.” … Connor has 400 points (201 goals, 199 assists) in 431 games. The only player in Jets/Atlanta Thrashers history to reach the milestone in fewer games is Ilya Kovalchuk (403 games).