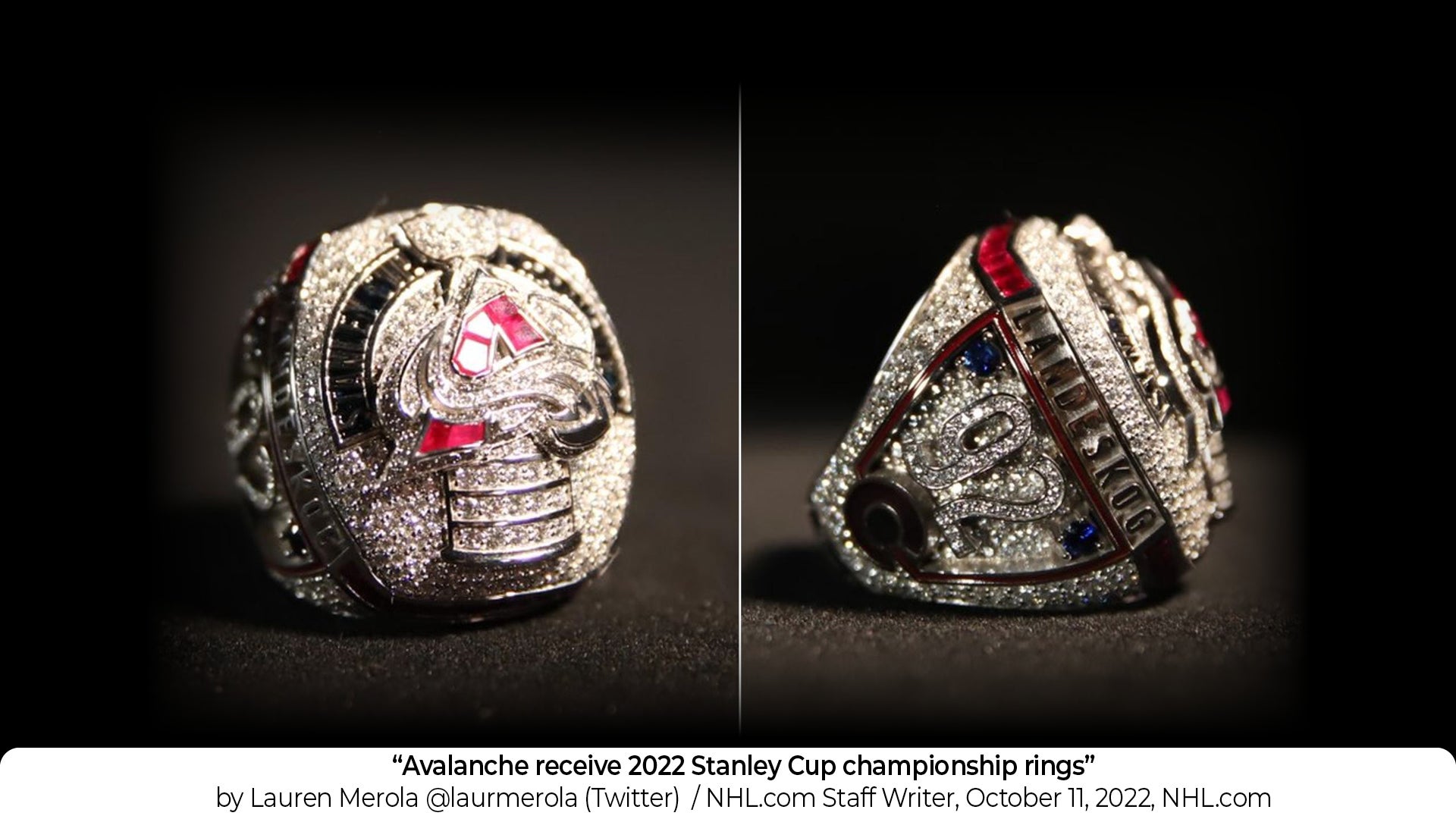 Shared with permission by Lauren Merola, NHL.com. Click here to view the original post in its entirety.

On Monday, the Colorado Avalanche forward put on an extra 18.5 carats.

According to the Avalanche, the team, coaching staff and ownership received their 2022 Stanley Cup championship rings in a private ceremony.

“The Stanley Cup was [at the ceremony] with the guys from the Hall of Fame and our ownership group,” coach Jared Bednar said. “We had a great dinner. [It was] pretty emotional when you get handed the ring. Opening the box and watching the video that goes with it, it’s like things that I haven’t thought about for a couple of months now, and seeing it again live and seeing everyone there and enjoying it, I think there was a lot of emotion in the room. They’ll never take it away from us. That’s our last little bit of celebration. You get your ring that you get to keep forever and now we have to move on, but it was a fun night.”

The 14-karat white gold ring is set with diamonds, rubies and sapphires.

The Avalanche logo and their “STANLEY CUP CHAMPIONS” title is set above 18 custom-cut sapphires. The “A” is made of six rubies, representing the six games of the Stanley Cup Final. There are also 19 diamonds set in the snow flowing to the hockey puck on the “A,” paying homage to a former Avalanche forward, Joe Sakic, who wore No. 19 and is the only team captain and general manager to win a Stanley Cup with the same team. These diamonds total .22 carats, a nod to the 22 years under Stan Kroenke’s ownership.

“We wanted to bring the Avalanche’s championship journey to life and this ring tells that story beautifully,” said Chris Poitras, vice president and COO of the Professional Sports Division at Jostens, the ring manufacturer.

“Those rings are pretty amazing,” defenseman Cale Makar said. “They did an absolutely outstanding job.”

In total, the championship ring is made of 669 diamonds, 20 sapphires and 42 rubies, weighing a total of 18.5 carats.

“It’s heavier than I thought it would be,” forward J.T. Compher said. “I went in with no expectations, and it is awesome.”

Bednar, Makar and Compher all said the ring is more of a keepsake than jewelry they’ll wear regularly, but their sights are set on coming together again for another ring ceremony next year.

“[That was] the last time for a while we should be thinking about last year, besides going through what helped us have success and following the same blueprint for this season …” Bednar said. “Now, it’s time to start thinking about Chicago.”

The Avalanche open up against the Chicago Blackhawks at Ball Arena in Denver on Wednesday.