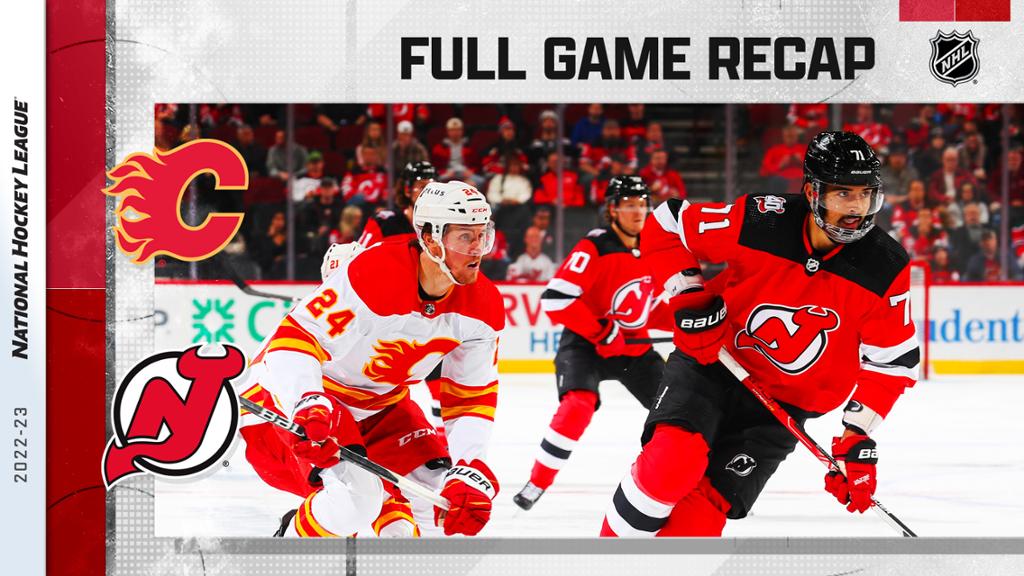 NEWARK, N.J. — Vitek Vanecek made 33 saves, and the New Jersey Devils held on to extend their winning streak to seven games with a 3-2 victory against the Calgary Flames at Prudential Center on Tuesday.

“When we needed him, he made that big save,” Devils coach Lindy Ruff said.

Nico Hischier and Dougie Hamilton each had a goal and an assist, and Tomas Tatar had two assists for New Jersey (10-3-0), which hadn’t won seven straight since Feb. 6-19, 2011.

“We just want to keep it rolling,” said Hischier, the Devils captain. “Obviously we got a lot of confidence right now, but like I said at the beginning of the year, we can’t get too low if we lose a couple and can’t get too high if we win a couple. We have to try and stay on the same line, come in and work on the mistakes and try to become a better team.”

Hischier broke a 2-2 tie on a snap shot from the left face-off circle at 11:50 of the third period.

Rasmus Andersson had two assists, and Jacob Markstrom made 17 saves for Calgary (5-5-2), which has lost six in a row (0-4-2). Markstrom made 28 saves in a 4-3 overtime loss at the New York Islanders on Monday.

“At the end of the day, frustration isn’t going to get you anywhere,” Flames center Nazem Kadri said. “It’s just going to dig you a deeper hole. I believe in the guys in here and we’re just going to have to dig in.”

Kadri gave Calgary a 1-0 lead with a power-play goal on a wrist shot from the right face-off circle at 11:58 of the first period.

The Devils had their first goal overturned at 17:57 when it was determined forward Jesper Boqvist preceded the puck into the offensive zone 29 seconds prior to defenseman Jonas Siegenthaler scoring on a wrist shot from the point.

“You got to be able to deal with adversity and we had a couple of tough ones go against us,” Ruff said. “Sometimes you get those, sometimes you don’t, and we didn’t get it.”

Video: [email protected]: Graves gets a drop pass and fires it home

The second goal was overturned at 3:53 of the second period when it was determined Yegor Sharangovich used a distinct kicking motion to direct the puck across the goal line from the slot.

“It wasn’t our best game,” Hischier said. “We didn’t have our legs in the first period, to be honest, and it was embarrassing. But we found a way back. In the end, if you’re going to win those games, it’s huge. We found a way and it was good to get the two points.”

Vanecek stopped back-to-back shots by Tyler Toffoli on a wrist shot from the slot at 14:22 before stretching his left pad to deny Elias Lindholm at the right post.

“I think the one in the second period [against Lindholm] was probably the save that helped us win the hockey game,” Ruff said.

“Any time you lose, it is frustrating, but honestly, it’s not about that,” Flames coach Darryl Sutter said. “It’s not about the effort. I don’t question that. It’s about execution.”

Toffoli tied it 2-2 with a power-play goal at 5:13 of the third period from the left circle.

NOTES: Flames forward Jonathan Huberdeau did not play because he could not fit his swollen foot into his skate prior to the game, according to Sutter. He is day to day. Huberdeau was replaced by Adam Ruzicka, who had an assist and two hits in 15:43 of ice time. … Defenseman Dennis Gilbert had two shots in 11:28 in his Flames debut after being recalled from Calgary of the American Hockey League on Sunday. He signed a two-year contract July 13. … The Flames went 2-for-4 on the power play after being 0-for-12 the previous five games. … Hischier extended his point streak to five games (seven points; three goals, four assists), and Tatar extended his assist/point streak to five games (six assists). … New Jersey matched the fewest games in franchise history to reach 10 wins (13 games, 1993-94).