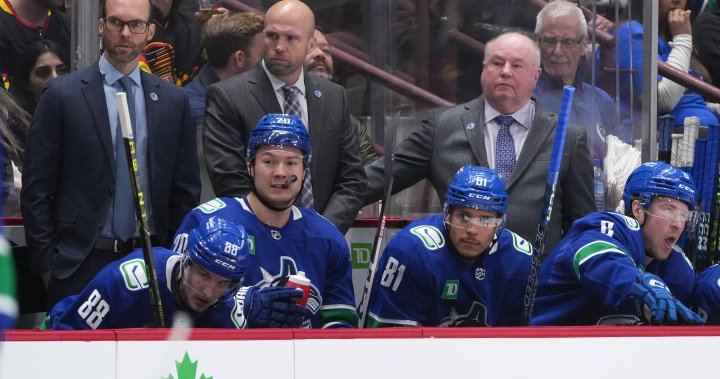 The Vancouver Canucks know January could make or break their season.

Struggling with consistency and faced with a daunting schedule, this month will likely show whether Vancouver has the ability to claw its way into playoff position or if it will miss post-season play yet again.

“I know from our standpoint, we have to be good this month or it’s going to get ugly, for sure,” forward J.T. Miller said on Monday. “It turns into a grind and a race to push where we’re at.

“But I think we’re just worried about the immediate future right now and just playing a really solid game (on Tuesday) and trying to go from there.”

A stacked lineup of opponents is sure to make the month difficult.

The Canucks kick off 2023 on Tuesday with a home tilt against the New York Islanders before hosting the Stanley Cup-champion Colorado Avalanche on Thursday.

The team then heads out on a punishing five-game swing through Winnipeg, Pittsburgh and Tampa before finishing the road trip with back-to-back matchups against Florida and Carolina. Back in Vancouver, contests with the Lightning, Avs and Oilers await.

“That (schedule’s) not an easy task,” said head coach Bruce Boudreau. “But the thing is, we’ve beaten a lot of those teams already. And we can beat them again if we consistently play at the top of our game.”

The Canucks head into Tuesday’s game following losses in Winnipeg and Calgary — both outings that Boudreau saw as winnable matchups.

“We just didn’t play our best and we were right there,” he said. “We need consistency through the lineup, one through 20. And if we get it, we win, it doesn’t matter who we play. But when you don’t get it, it’s hard to win.”


Consistency has been hard for Vancouver to come by this season.

The Canucks currently sit in sixth place in the Pacific Division with a 16-17-3 record, seven points out of a playoff spot.

After starting the campaign with a dismal 0-5-2 record, the team has neither won nor lost more than three games in a row and has made it over the NHL .500 mark just once, when they downed the San Jose Sharks 6-2 on Dec. 27.

Finding a way to string together a series of solid performances is key to becoming a perpetual playoff contender, said defenceman Luke Schenn.

“If you feel good about your game, you’re winning, you don’t let your foot off the gas. And if you go into a bit of a rut and drop a couple, then you get right back on it and find your game right away,” he said.

“So that’s what the good teams do and, obviously, we’ve got a ways to go to find that.”

1:43
N.B. organist called up for World Juniors games in Moncton


Fighting to get back into playoff position is nothing new for the Canucks.

Last season, Vancouver made a late push, closing out the campaign with a 32-15-10 record and missing the playoffs by five points.

“It’s going to be tough, I’m not going to lie. But we’re in a lot better position than we were last year at this time. So it’s going to be a challenge for us,” he said.

“We’ve got a lot of good, hard matchups coming up, but I have faith in our group that we can pull through this and make a push for the playoffs here. That’s been our goal since the beginning of the year.”