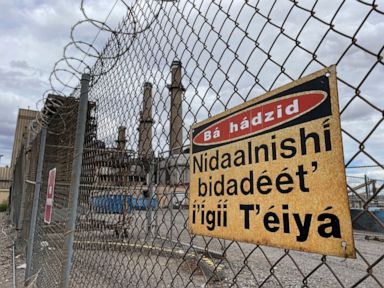 KIRTLAND, N.M. — The clamor of second graders breaking away from lessons to form lunch lines has gotten quieter in a rural New Mexico community, where families losing coal jobs have been forced to pack up and leave in search of work.

At Judy Nelson Elementary, 1 in 4 students have left in an exodus spurred by decisions made five years ago to shutter a coal-fired power plant and mine that sit just up the road from the school in a largely Navajo community. The plant and mine had provided electricity to millions of people across the southwestern U.S. for nearly a half-century.

The San Juan Generating Station burned its last bit of coal Thursday. The remaining workers will spend the coming weeks draining water from the plant, removing chemicals and preparing to tear down what has long been fixture on the high-desert horizon.

It’s part of the latest wave of coal-burning units to be retired as New Mexico and other states try to fight climate change by requiring more carbon-free sources of electricity. President Joe Biden also has pledged to cut greenhouse gas emissions in half by 2030.

Just weeks ago, Hawaii’s last coal-fired power plant closed after 30 years, and more retirements are scheduled around the U.S. over the next decade.

Realities of shuttering the San Juan plant are setting in for surrounding communities, including the Navajo Nation, where poverty and joblessness already are exponentially higher than national averages. Hundreds of jobs are evaporating along with tens of millions of dollars in annual tax revenue used to fund schools and a community college.

“A lot of the Native American families have multi-generations living in the home so it doesn’t just affect the husband and wife. It affects their children and their grandchildren,” said Arleen Franklin, who teaches second grade at Judy Nelson. Her husband purchases equipment for a coal mine that feeds another power plant scheduled to close in 2031.

Denise Pierro, a reading teacher at Judy Nelson, said it’s stressful for parents to see a steady income erased. Pierro’s husband, who served as the general manager of the mine for the San Juan plant, is among those forced into early retirement.

“They’ve taken the rug out from underneath our feet,” she said.

Area power plants, mines and associated businesses represent 80% of property tax revenues that fund the Central Consolidated School District, which spans an area the size of Delaware and Rhode Island combined. Almost 93% of the students are Navajo.

It’s rural and remote. Some students ride a school bus for three hours round trip, arriving home well after sunset. Internet service is spotty or nonexistent, and many homes don’t have electricity or indoor plumbing. The poverty rate within the district is four times the national level. The median annual household income is about $20,000, and the unemployment rate hovers around 70%.

New Mexico’s Democratic leaders have celebrated the plant’s closure while touting a landmark 2019 law that pushes for a renewable energy economy. Gov. Michelle Lujan Grisham, who is running for reelection, has said the law represented a promise to future generations for a cleaner environment and new job opportunities.

Environmentalists have said the closure will reduce air and water pollution in a region that some have described as an industrial sacrifice zone. They argue that power plant emissions and methane from the oilfields have caused health problems for residents.

Joe Ramone, a 69-year-old pipe welder who worked at San Juan, lives in a Navajo community not far from the Four Corners plant. When the wind blows just right, he said his community is hit with ash and coal dust.

Still, he said his priority is making sure Navajos have work.

“I don’t want to see anybody unemployed and I am in no way in favor of these companies being shut down. But there’s room for improvement,” he said, suggesting more investments could have been made.

The loss of the San Juan plant and the mine ripple through every facet of life, from fewer lunch orders at Kirtland’s café to a dwindling ash supply for concrete manufacturers. Meanwhile, prices have skyrocketed for everything from the Navajo staple of mutton to the woven baskets and other materials needed for healing ceremonies.

Public Service Co. of New Mexico, which runs the plant, is providing $11 million in severance packages to help about 200 displaced workers. About 240 mine workers are getting severance payments worth $9 million. Another $3 million went to job training.

Solar and battery storage projects are meant to eventually replace the capacity lost with San Juan’s shutdown and provide jobs during construction. But some of those projects have been delayed due to supply chain problems, and others are on hold indefinitely amid historic inflation and other economic constraints.

Fresh off a night shift as an electrician at the mine for the neighboring Four Corners Power Plant, Christine Aspaas, a Central Consolidated School Board member, said even if those “green” jobs existed now, they would be temporary. And to make up for lost property tax revenue, she said, some families will have to pay up to seven times more.

It’s been heartbreaking for so many Navajos to consider leaving home, Aspaas said.

“That’s what others don’t understand,” she said. “There’s culture, there’s traditions, and so it’s not easy.”

Sharon Clahchischilliage, once a teacher and a former New Mexico lawmaker, said people in her Navajo community near Shiprock are angry.

“One of them told me, ‘I don’t know who to be angry at for us having to do this. We don’t have a family anymore,'” she said, referring to bonds broken as Navajos search for jobs elsewhere.

In the final days, the plant’s spinning turbine sent vibrations through layers of concrete and passing work boots. Heat emanated from the boilers below.

In the dim control room, workers monitored screens displaying temperatures, pressure, turbine speeds and pollution control systems. Allen Palmer, 70, spent over half his life working his way up the ranks.

Workers knew for years that the plant would be shuttered. It became more real as coal piles shrank each day — until there was nothing left. As the finish line approached, the company served workers green chile cheeseburgers as a morale booster alongside a big projection screen that read: “Thank you to all employees at San Juan for your years of dedicated service!”

The last few dozen employees will be laid off over the coming weeks. Some were ready to retire; in June, there were voluntary layoffs when the first of the last two generating units closed.

“There’s lots of us who have worked 20-plus years and we all know each other and it’s our family,” said plant director Rodney Warner, who will oversee the decommissioning. “It’s who we are.”

December would have marked 10 years at the plant for Steven Sorrow, 32. He and his coworkers know there’s a good chance they will have to uproot and possibly enter other fields. Some will head to Wyoming, Colorado or Utah, where there are other plants and mines.

“It’s going to be an adjustment for sure,” he said. “I feel like I’ve tried to prepare over the five years when they told us what we had left. Hopefully I’ve prepared well enough.”

“This whole transition, everything that’s happening, the closures, that’s what is threatening our ability to keep funding education,” she said. “When you go down to what it impacts, it is the education of our people, of the Navajo people, our students.”