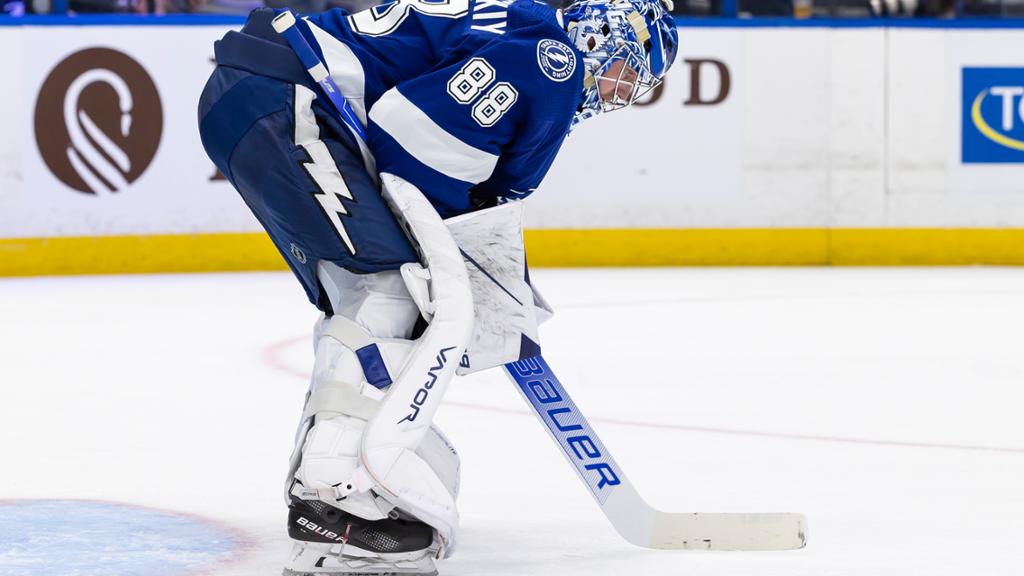 The latest innovation in goaltending isn’t easy to spot because, on the ice, goalie skates are mostly hidden by goalie pads. Yet, the trend toward a skate that looks more like a ski boot is certainly raising eyebrows in NHL locker rooms.

The new Bauer KONEKT goalie skate has a hard outer shell, a separate and removable inside liner, and metal buckles instead of skate laces.

It might be closer to a ski boot than a skate in its genealogy.

“What in the world are these? Ski boots?” Washington Capitals goalie Charlie Lindgren said of frequent first reactions. “Guys are like, ‘Are you serious with that? What are you doing putting those on?’ And I’m like, ‘Honestly, I love them.'”

Lindgren was the first NHL-contracted goalie to wear the new skate last season, with the St. Louis Blues and Springfield, their American Hockey League affiliate.

Kaapo Kahkonen, who split the season between the Minnesota Wild and San Jose Sharks, was not far behind. Andrei Vasilevskiy switched to KONEKT in mid-December and wore them through to the Stanley Cup Final, where the Tampa Bay Lightning lost to the Colorado Avalanche.

Twelve goalies wear the new skates in the NHL now, another 17 in the AHL.

The rapid adoption isn’t a surprise to Lindgren, who appreciated the additional forward flex offered by a hinge system.

“I got on the ice and honestly right from the moment I stepped on, I started moving around,” said Lindgren, whose new playing partner, Darcy Kuemper, is now also wearing KONEKT. “From the first skate, it just worked for me and I still feel even more athletic but still I’m in control. It suits my game. With the forward flexion you can dig in easier, and you don’t have to drive as hard just because of the way it moves.”

Finding a way to give goalies more ankle flex was the goal when Bauer challenged its goalie department to come up with something unique.

With skates getting stiffer through the years, goalies resorted to leaving the top eyelet on each skate undone to achieve flex. Bauer wanted to find a way to provide it without needing to loosen the skate.

Older sets of plastic-shelled Micron and Lange skates served as the starting point, followed by a meeting with Jason Roe, a ski boot developer for Atomic Ski.

“We wanted to change the game with a crazy innovation,” said Mark Gignac, the goalie category manager for Bauer.

The mechanical flex point in the ankle creates 22 degrees of forward flexion. Though some goalies reduce the amount of flex, most agree it creates a better connection to the ice by allowing them to load deeper into pushes and keep more blade on the ice.

“You find your edges way easier because you have that little bit of bend,” said Carolina Hurricanes goalie Antti Raanta, who has been using the skates for a couple weeks in practice and plans to use them in games. “It just feels like you’re a little quicker with every movement. The game is getting faster, so if you can get even a little quicker, it’s always a plus.”

Lindgren and Florida Panthers goalie Spencer Knight also think the flex makes it easier to push side to side from the butterfly.

“You don’t have to pick up your leg so much,” Knight said. “You have better ankle mobility and dorsiflexion, so you can keep your blade on the ice longer.”

With a flexed ankle, some goalies also feel less of the stress from starting and stopping or sliding into the posts.

“I like the mobility they provided my ankle,” said Alex Nedeljkovic of the Detroit Red Wings. “I never really feel like my ankle is stiff or locked up with these.”

A wide variety of goalies have switched, from Knight, 21, to New York Rangers goalie Jaroslav Halak, 37, who can be particular about his gear after 17 NHL seasons.

“I like them so much that I tried to go back to my old skates, and I just couldn’t,” Halak said.

In addition to performance, the new KONEKT skates make it a lot easier to get dressed, especially since many goalies prefer to take their skates off between periods. The buckles are not only faster, but once they’re set to a preferred tightness, it’s easy to maintain.

“The buckle system doesn’t loosen up like laces do when they get wet,” St. Louis Blues goalie Thomas Greiss said. “Whole thing reminds me of my skiing days.”

Raanta said the same thing about skiing, which brings us back to the inevitable commentary from teammates seeing the new skates for the first time.

Cory Schneider, whose own switch to KONEKT appeared to inspire fellow New York Islanders goalie Semyon Varlamov to try them this week, tried to get ahead of it by “being the first to point out how ridiculous they look” in the room.

“They are pretty jarring to look at, almost like a ’90s rollerblade hybrid,” Schneider said. “But as a goalie, you have to come up with any edge you can because shooters are too fast and too good.

“Anything to make you lighter, quicker, less encumbered moving around, guys are going to try it because they’re looking for that one percent advantage. If this is how it looks, I don’t think goalies care.”