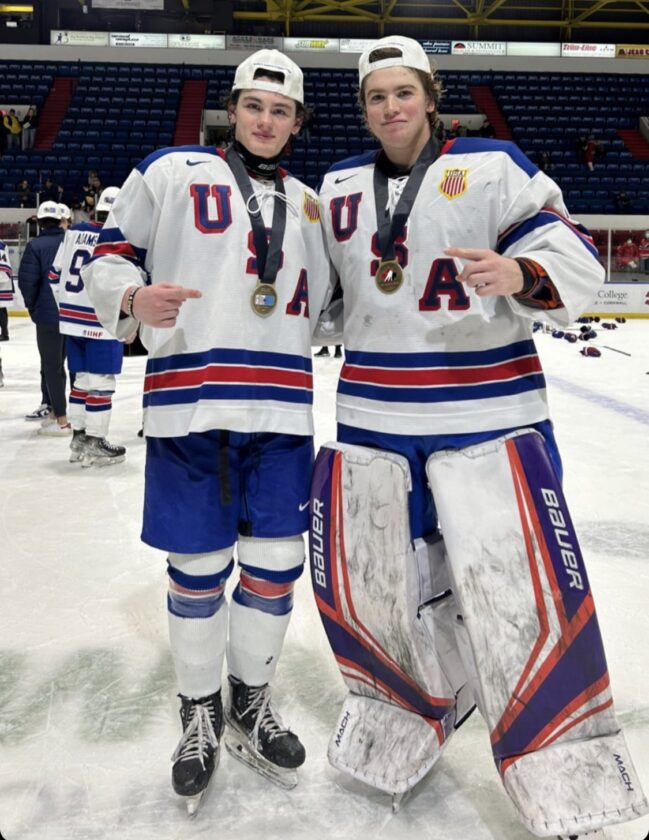 Photo courtesy of the Youngstown Phantoms / Andrew Strathmann, left, poses with Jacob Fowler after the pair took the gold as a part of Team USA in the World Junior A Challenge earlier this month.

A pair of Phantoms brought gold back to Youngstown, as defenseman Andrew Strathmann and goaltender Jacob Fowler helped Team USA take the top spot in the 2022 World Junior A Challenge.

Team USA was one of six teams involved in the tournament, competing alongside Czechia, Latvia, Sweden and two Canadian squads, a Canada East team and a Canada West team.

In the title game, the netminder stopped 24 of 26 shots and posted a .923 save percentage.

“It was honestly pretty surreal,” Fowler said. “My mind just went blank (in the final moments). … As soon as that clock hit zero, it was an unbelievable feeling and something that I’ll never forget for the rest of my life.”

Throughout the tournament, Fowler posted the second-highest save percentage out of all goaltenders, and the highest of goaltenders that played at least three games with a .918. He also made 78 total saves and posted a shutout.

Strathmann recorded an assist during the tournament, but was a staple on the backend for a team that allowed 10 goals in six games.

“It was just kind of a blur,” Strathmann said about the final seconds of the championship game. “The clock’s running down, and then all of a sudden, you’re in the locker room celebrating the gold with all the boys, which was something I’ll never forget, that’s for sure. Great moment.”

Being teammates on the Phantoms, albeit for a short time so far this season, gave the pair an extra bit of chemistry on the back end, which for a goaltender-defenseman duo, has some major advantages.

“We had the best players from pretty much every team in the USHL on one roster, but it’d be hard to say I trusted any of them more than I trusted (Strathmann) on the ice,” Fowler said. “I see him in front of me every day at practice and every game. It’d be hard to say he didn’t have the most trust in me and I didn’t have the most trust in him the whole tournament because we had that chemistry going in, and I think it’s just going to be even more going down the stretch of the season.”

Strathmann mentioned how being together there as teammates for two different squads really strengthened their bond.

“Going there and having someone on your side that you can go to and talk to whenever you need is great and I think definitely built our bond a little better. Just being with each other for a couple of weeks there and not having anyone else (that you knew).”

As of the latest rankings, Strathmann is ranked 40th by Craig Button of TSN and 56th by scouting service FCHockey. That projects him around the second or early third round.

Fowler is the 97th ranked prospect by FCHockey, projecting him around the third to fourth round.

Both players got to highlight their skills in front of NHL scouts along with representing their country. To Phantoms coach Ryan Ward, it’s truly a special thing.

“I think anytime you get a chance to play for your country, and don the red, white and blue, it’s a huge honor,” Ward said. “For both of those guys in their draft year, gaining experience like that and being able to play at an international level is something that they’ll never forget.

Now that they’re back with the Phantoms, it’s time to switch focus from a gold medal, back to a Clark Cup.

“I think we’re doing a lot of really good things,” Fowler said. “We have a pretty young group. I think that we have a really good coaching staff and we have a really really talented team. I think the puzzle pieces are starting to come together, we just got a couple of acquisitions with a couple of new trades, so I think that the team is getting to where we knew it could be and we’re starting to play the game and the style that we know we can be successful with.

“I think that can be a pretty exciting time. We’re going to be a tough team to beat in the Eastern Conference, and then hopefully in the Clark Cup Final.”

The World Junior A Challenge has been host to many future stars over the years. Nikolaj Ehlers (Winnipeg Jets), Evgeny Kuznetsov (Washington Capitals), ​​David Pastrnak (Boston Bruins) and 2021-22 Norris Trophy winner Cale Makar (Colorado Avalanche) have all worn their respective countries’ colors as a part of the tournament.


Today’s breaking news and more in your inbox