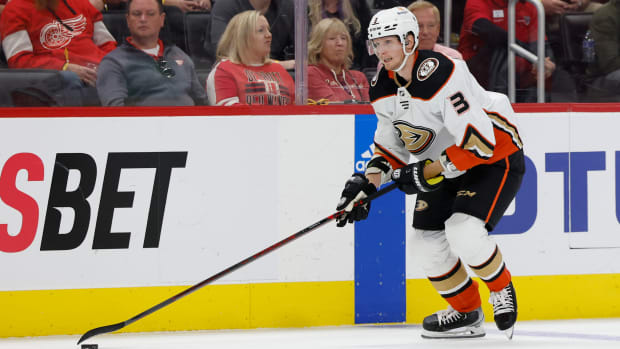 The Anaheim Ducks have been one of the NHL’s biggest disappointments this season – their current record of 6-15-1 is the worst in the entire league – and as a result, they’re almost assuredly going to begin dealing away non-core assets to the highest bidder before the trade deadline.

Ducks GM Pat Verbeek is in his first full season running the team, and he’s going to be one of the go-to guys for any colleague looking to bolster their lineup for a deep playoff run.

The Lowdown: Henrique is more than just a rental player with one more season on his contract after this year. But he’s got enough left in the tank to help out a playoff contender, especially if Verbeek retains a portion of his salary. A team like the New York Islanders or Colorado Avalanche would happily bring Henrique aboard, and they wouldn’t have to sacrifice all that much in a trade. Moving him wouldn’t be so much of a salary dump as it would be opening up more time and opportunities for one of Anaheim’s younger forwards.

The Lowdown: Vatrano is in Year 1 of a three-year, $10.95-million contract he signed with Anaheim last summer, and at 28, he’s young enough to be part of a better team’s longer-term picture. Vatrano also played well in the post-season for the New York Rangers last spring (five goals, 13 points in 20 games). His cost certainty makes him more attractive than Henrique, but a high first-rounder is likely too much for Verbeek to ask for him. Would the Rangers take him back for a second tour of duty in Manhattan? Stranger things have happened.

The Lowdown: Kulikov is one of three Ducks blueliners who could have new homes before the end of this season. He’s bounced around the league for a while now – the Ducks are his sixth team since 2016-17 – but as a depth acquisition, he checks a lot of boxes for teams needing help on the back end. He’s playing more minutes in Anaheim than he would on a legitimate Cup contender, but that’s not going to drive up the quality of assets he’d bring back in any trade. Kulikov has a modified no-trade clause – as per Cap Friendly, he can submit a list of eight teams he would not accept a trade to – but he’s spinning his wheels with the Ducks. He still can contribute on a much better team that asks less of him, and he’s the Ducks’ D-man who will cost a trade partner the least.

The Lowdown: Shattenkirk has a championship pedigree from his one year with the Tampa Bay Lightning, but all the years of wear and tear are showing on him this season. He’s no longer a dynamic force on offense, but he did generate 27 assists and 35 points with Anaheim last season. Teams that lose out on the John Klingberg (more on him below) and Jakob Chychrun sweepstakes will look to a player like Shattenkirk to shore up their defense corps, and he won’t cost anybody a top-tier prospect or first-round draft pick. Like Kulikov, Shattenkirk has a modified no-trade clause, but Shattenkirk’s list of teams he can’t be dealt to is a 12-team list. A franchise looking for a power-play specialist could do much worse on the trade market than Shattenkirk.

The Lowdown: Klingberg signed a one-year deal with Anaheim last summer, knowing full well he could be moved before the deadline. His modified no-move clause includes a full no-move clause until New Year’s Day. After that, he can submit a list of 10 teams he can reject a trade to. That still leaves quite a few interested trade partners for his services, and as a right-shot defenseman capable of amassing above-average amounts of offense, he has an asking price that will be the highest on the Ducks. After Chychrun and fellow Arizona Coyote Shayne Gostisbehere, Klingberg will be the biggest proven quantity on the trade block, and it’s all but guaranteed Verbeek will move him.