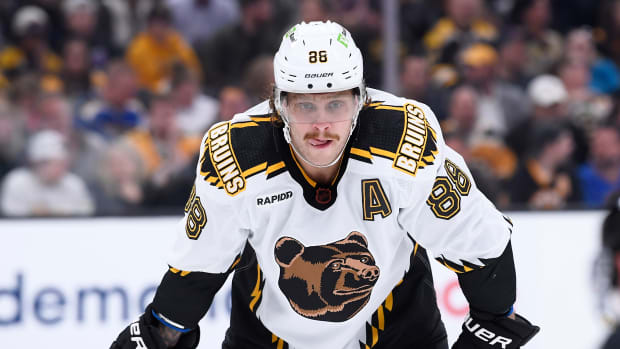 There are many fantastic forwards in the NHL, all of whom have the ability to produce for their teams and are known for either their elite goal-scoring ability, playmaking, creativity, stickhandling, physicality, or a mix of all these traits.

But not all of these forwards had a strong start to the season. There were forwards who had a consistently solid October while forwards such as Auston Matthews were slower out of the gate but will surely climb up the ranks soon.

Let’s look at 10 forwards who impressed the most one month after the Global Series kicked off the season.

1. Connor McDavid, C, Edmonton Oilers: McDavid’s proving he’s still a generational talent with the ability to change the outcome of games singlehandedly. His speed, creativity, ability to find open teammates, high hockey IQ and goal-scoring acumen make it no surprise he leads the NHL with 13 goals and 27 points in 13 games. He is a threat on the power play with six goals and 12 points, wins 54.4 percent of his draws, isn’t afraid to chip in defensively and is excellent in the neutral zone creating turnovers and advancing in transition. He’s the best in the league, even with a blank slate to start the new season.

2. Leon Draisaitl, C/LW, Edmonton Oilers: Draisaitl has scored eight times in 13 games this season, but the areas of his game where he excels the most are as a playmaker and two-way forward, leading the league with 17 assists and 21 takeaways. Draisaitl has a high hockey IQ, great vision, is phenomenal with the puck on his stick and can get the puck to any of his teammates anywhere on the ice with his crisp, accurate passes. Seven of his assists came on the power play, and he’s phenomenal in the faceoff circle, winning almost 56 percent of his faceoffs. Both his and McDavid’s presence win games for the Oilers.

3. David Pastrnak, RW, Boston Bruins: The Bruins got off to a red-hot 11-2-0 start and lead the Eastern Conference. Pastrnak is a huge reason why. He has eight goals and 20 points in 13 games. If he stays on pace and remains healthy, his first 100-point season is nearly guaranteed. Pastrnak is excellent with the puck on his stick and knows how to put himself in positions to score. He leads the team with 67 shots on goal, second-most in the league only behind San Jose’s Timo Meier.

4. Nikita Kucherov, RW, Tampa Bay Lightning: Kucherov is a tremendous playmaker who can score when he needs to. Kucherov has six goals and 20 points in 12 games and averages more than one assist per game. Seven assists came on the power play, showing his creativity in open ice. Most importantly, he’s very durable and reliable averaging 22:25 minutes of ice time per game this season, second highest among NHL forwards behind Florida’s Aleksander Barkov.

5. Nathan MacKinnon, C, Colorado Avalanche: MacKinnon’s composure and patience in the offensive zone, his playmaking, stickhandling, ability to get open and quick release on his accurate shot make him one of the best centers in the league. Of his 19 points this season, 16 are assists, highlighting his incredible playmaking talent. He even had seven assists in two games last week, earning the second star of the week honors by the NHL. He recognizes what opposing defenses are doing and can counter it with his creativity, speed and accurate passes. His 55 shots on goal lead the team by 19, and he wins about half of his draws.

6. Matthew Tkachuk, RW, Florida Panthers: Tkachuk is elite at only 25 years old. He’s a playmaker, a goal-scorer, contributes defensively and isn’t afraid to be physical or put his body on the line to make a play. It’s a surprise he only has 10 hits this season based on his physicality and pesky reputation. Tkachuk can be relied on to play heavy minutes, averaging 21:46 of ice time per game. He generates a ton of chances with his playmaking and ranks third in the NHL in shots on goal with 63. If he can increase his shooting percentage from 7.9 percent, he can easily boost his five goals and 17 points this season, although he still leads the team handily.

7. Artemi Panarin, LW, New York Rangers: Panarin’s impact on the Rangers as a purebred playmaker has been nothing short of spectacular. Panarin has shown flashes as a goal-scorer netting five goals this season but has 12 assists, eight of which came on the man advantage. His creativity with the puck on his stick, his vision, hockey IQ and his accurate short and long passes allow him to get the puck to any of his teammates anywhere on the ice. Panarin, Igor Shesterkin and Mika Zibanejad have been critical to the Rangers’ success in recent seasons.

8. Jesper Bratt, RW, New Jersey Devils: I bet no one would’ve predicted Bratt being in the top 10 a month ago. The talented young winger has shown an immense amount of potential at only 24 years old. After scoring 73 points in 76 games last season, Bratt is already on his way to another productive campaign with five goals and 17 points in 12 games. He is speedy, has a strong, accurate shot and a quick release. He has great vision, phenomenal stickhandling and consistently delivers accurate passes with good hockey sense. He’s quickly establishing himself as a top young talent in the league.

9. Mika Zibanejad, C, New York Rangers: Zibanejad is a natural scorer, with an ability to get open for chances. He leads the Rangers with 58 shots, and his accurate wrist shot and powerful snapshot both have quick releases. He has seven goals and 15 points in 12 games, including nine points on the power play. He is very dangerous in open space with and without the puck on his stick. He goes after loose pucks, creates turnovers in neutral ice and is one of the best faceoff takers in the league, winning at a 50-percent clip. His point totals getting surpassed by strong weeks from Jason Robertson and Martin Necas mean he’ll likely fall out of the top 10 soon, but it’s worth crediting his strong October.

10. Brady Tkachuk, LW, Ottawa Senators: Tkachuk is one of the best two-way forwards in the NHL thanks to his ability to create chances for his teammates, get pucks to the net, score goals, defend and dominate in the faceoff circle as a winger. He’s won over 57 percent of his 92 faceoffs. He is second on the team with 39 shots on goal, has six goals which is tied for the most on the team, and leads the Senators in assists with 10 and points with 16. He consistently chips in defensively, is excellent in the neutral zone and at creating turnovers and is very physical, leading the Senators with 33 hits. He plays a 200-foot game, which helps the Senators stay competitive and made him a star of the week by the NHL in October.