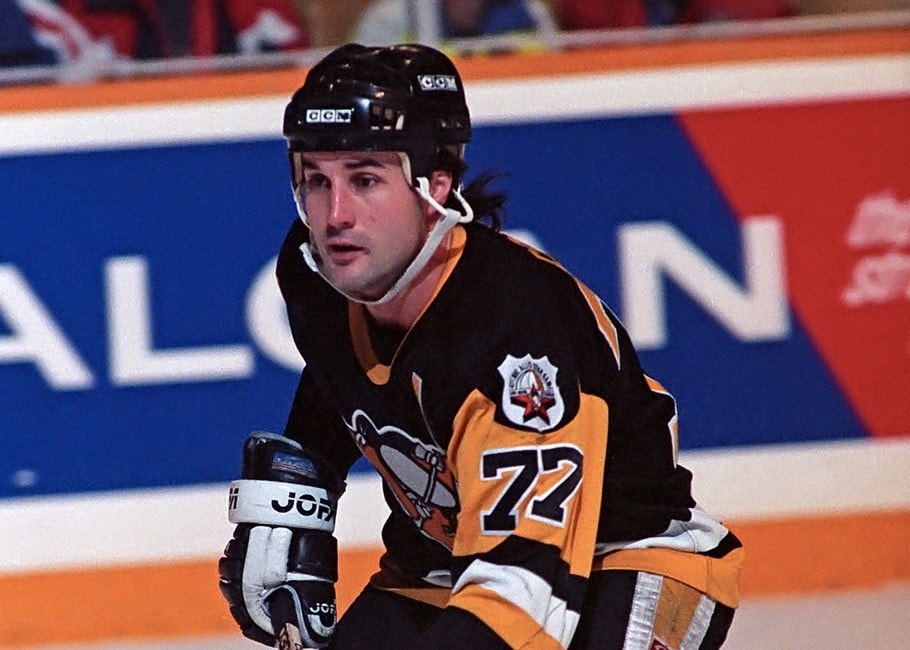 Some of the greatest players in National Hockey League history had big moments on this date. The records for the most wins by a goaltender and points by a defenseman were broken, and the first European-born player to score 500 goals hit his milestone. The THW time machine is ready to take us back to relive all the great moments from Oct. 17.

Patrick Roy made 27 saves on Oct. 17, 2000, to lead the Colorado Avalanche over the Washington Capitals 4-3. The victory was Roy’s 446th of his career, putting him ahead of Terry Sawchuk for the most regular-season wins in NHL history.

Roy retired in 2003 with 551 career wins. His record lasted until March of 2009 when Martin Brodeur earned his 552nd victory, on his way to finishing his career with 691. To put things in perspective, over the past 20 years, Sawchuck has since fallen to eighth on the all-time wins list.

Coffey Brews the Most Points

On Oct. 17, 1991, Paul Coffey picked up a pair of assists in the Pittsburgh Penguins’ victory over the New York Islanders. The two helpers gave Coffey 1,053 points in his career, making him the highest-scoring defenseman in NHL history. It was appropriate that New York was in town as Coffey broke the record previously held by Islanders’ legend Denis Potvin.

Coffey retired in 2000, after 18 games with the Boston Bruins, with 1,531 points. Later that season, former Bruin, Ray Bourque, broke Coffey’s record and still holds it with 1,612 points. Potvin’s 1,052 points are still good enough for the seventh-most ever scored by a defenseman.

Jari Kurri scored an empty-net goal on Oct. 17, 1992, to secure the Los Angeles Kings’ 8-6 win over the Bruins. The easy goal was the 500th of his career, becoming the 18th player in NHL history to reach this milestone. More importantly, he was the first European-born player ever to score 500 goals in the league.

It took the Finnish-born Kurri 833 games to score 500 goals. No. 500 came one day shy of the 12th anniversary of him scoring his first career goal. He netted another 101 goals before retiring in 1998 with 601 in his Hall of Fame career.

The Washington Capitals took to the ice for the fourth time on Oct. 17, 1974, hosting the Chicago Blackhawks at the Capital Centre. After two losses and a tie, they finally earned their first win in franchise history with a 4-3 victory.

In the third period, Jack Egers lit the lamp to break a 3-3 tie and score the first game-winning goal in team history. Goaltender Ron Low made 33 saves to pick up the win. This was just one of eight wins for the Capitals in their inaugural season of 1974-75, where they finished 8-67-5.

Huge Date for the Flames

The Flames had numerous memorable moments on Oct. 17, in both Atlanta and Calgary. On this date in 1978, in Atlanta, Tom Lysiak picked up four assists as the Flames blew out the visiting Colorado Rockies 8-2.

On Oct. 17, 1984, Eddie Beers scored his fourth career hat trick as the Flames beat the Winnipeg Jets 7-4 at the Saddledome.

The Flames set a team record on Oct. 17, 1988, with seven goals in the third period in an 11-4 win over the Kings. Rookie Jiri Hrdina led the scoring with his first of two career hat tricks.

Things looked bad on Oct. 17, 1989, as the Flames found themselves trailing the Quebec Nordiques 8-3 with less than seven minutes to play. Gary Roberts scored a pair of goals in just 16 seconds to start the comeback. Jim Peplinski cut the lead to 8-6 11 seconds after Roberts’ second goal. Doug Gilmour scored a shorthanded goal with 15 seconds left before setting up Paul Renheim’s game-tying goal only four seconds later. This set the NHL record for the fastest two shorthanded goals ever scored.

Henri Richard scored his first career hat trick on Oct. 17, 1957, in the Montreal Canadiens’ 9-3 victory over the Toronto Maple Leafs. He also had three assists to finish his night with six points.

On Oct 17, 1973, rookie Lanny McDonald scored the first goal of his NHL career in the Maple Leafs’ 5-3 road win at the Canadiens.

Bruins’ defenseman Mike Milbury scored the first goal of his NHL career on Oct. 17, 1976. This milestone tally was the game-winning goal in a 5-3 victory over Montreal.

Victor Nechayev became the first Soviet-born player to score a goal in the NHL on this date in 1982. His goal helped the Kings to a 5-3 win at the New York Rangers. This was one of only three NHL games he played.

Larry Murphy had five assists to set a club record for a defenseman on Oct. 17, 1989, as the Minnesota North Stars beat the Islanders 6-3 in New York.

Rick Tocchet became the Flyers’ all-time leader in penalty minutes on Oct. 17, 1991, when he passed Paul Holmgren in a 5-3 win over the Nordiques. Ironically enough, the record-breaking penalty came after Tocchet went three straight games without any trips to the sin bin.

After an 0-4-0 start to the season, the Canadiens fired general manager Serge Savard and head coach Jacques Demers on Oct 17, 1995. Jacques Lapierre was named as the interim coach. Réjean Houle was named as Savard’s replacement four days later.

On that same night, Boston’s Harry Sinden became the first general manager in NHL history to win 1,000 games as the Bruins beat the Blues 7-4.

Ottawa Senators head coach Jacques Martin recorded his 300th victory on Oct. 17, 2003, with a 3-0 win at the Mighty Ducks of Anaheim. He became the 13th coach to win at least 300 games with one team. Goaltender Patrick Lalime earned the 29th shutout of his career in the victory.

The Canadiens beat the Detroit Red Wings 4-1 on Oct. 17, 2015, to improve to 6-0-0 on the season. This marked the best start in the franchise’s long and storied history. They went 5-0-1 four times to start a season, but it was the first time they won their first six games.

On Oct. 17, 2017, Nikita Kucherov scored in the Tampa Bay Lightning’s 5-4 shootout loss to the New Jersey Devils. He became the sixth player since 1943 to score a goal in each of his team’s first seven games, joining Mario Lemieux, Mike Bossy, Wayne Gretzky, Ken Hodge, and Tony Tanti.