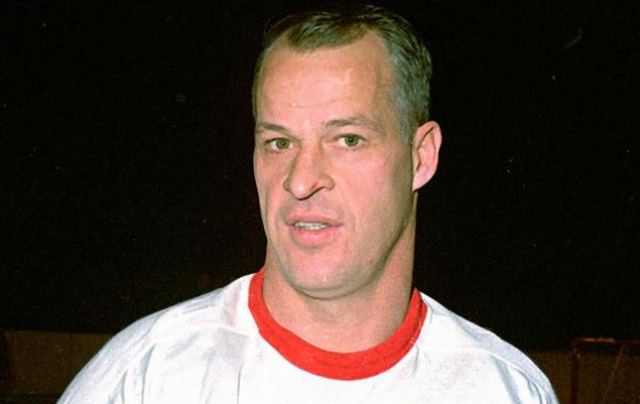 The National Hockey League changed forever on this date when one of its most legendary players took to the ice for the first time. Speaking of firsts, there were plenty of memorable events to happen for the first time, as well as some goaltending greats doing what they did best. So, let’s start our daily journey back in time and revisit all the great moments Oct. 16 has given us.

The NHL welcomed in one of its most legendary players on this date in 1946. This was when an 18-year-old Gordie Howe made his debut with the Detroit Red Wings. Wearing No. 17, as he didn’t switch to his famous No. 9 until the following season, Howe scored the first of his 801 career goals in a 3-3 tie with the Toronto Maple Leafs.

This started a 32-season professional career that lasted until 1980. He spent 25 seasons with the Red Wings before retiring in 1971. He came out of retirement in 1973 to join the Houston Aeros in the World Hockey Association (WHA). He had one final season in the NHL after the Hartford Whalers joined the league in 1979. He retired as the all-time leader in goals, assists, and points until some guy named Wayne Gretzky came along and shattered all of his scoring records.

On Oct. 16, 1971, Red Wings’ rookie Marcel Dionne scored the first goal of his NHL career in a 9-2 loss at St. Louis Blues. The future Hockey Hall of Famer scored 139 goals in Detroit before being traded to the Los Angeles Kings in 1975, where he scored 550 more goals. After three final seasons with the New York Rangers, Dionne retired in 1989 with 731 career goals.

Butch Goring became the first member of the Kings to ever score 350 points on Oct. 16, 1976. He reached this milestone with two assists during a 7-1 win over the Washington Capitals.

Victor Nechayev became the first player for the Soviet Union to skate in an NHL regular-season game on Oct. 16, 1982. He was held off the scoresheet during the Kings’ 4-1 loss at the New York Islanders. He played in just three total games with the Kings, scoring one goal.

Guy Lafleur scored his first goal as a member of the Rangers on Oct. 16, 1988, in a 3-2 win over the Vancouver Canucks. This was his first goal in nearly four years after he retired in 1984.

Terry Sawchuk recorded his 25th career shutout on Oct. 16, 1953, as the Red Wings blew out the visiting Chicago Blackhawks 7-0. Ted Lindsay led Detroit’s offensive attack with a pair of goals and an assist.

On Oct. 16, 1963, Jacques Plante played his first game at Madison Square Garden with the Rangers after 11 seasons with the Montreal Canadiens. His Broadway debut was successful as he led the Rangers to a 3-0 shutout over the Red Wings. Plante was given a tremendous ovation by the sellout crowd in earning his 59th career shutout.

On this same evening, Jaromir Jagr scored twice to become the second player to score 350 goals as a member of the Pittsburgh Penguins, joining Mario Lemieux. The milestone goal, and an assist, came in a 3-3 tie with the Blackhawks.

In New Jersey, Scott Gomez scored his first NHL goal and added two assists in the Devils’ 4-1 victory over the Islanders. In the same game, defenseman Scott Stevens became the 100th player in NHL history to score 800 career points.

On the west coast, Steve Rucchin became the Mighty Ducks of Anaheim’s all-time leader in career games when he appeared in his 334th contest.  He capped off his big night with a goal in a 3-2 overtime loss against the Florida Panthers. Rucchin broke the previous record held by Joe Sacco.

Finally, Ron Sutter played in his 1,000th career NHL game in the San Jose Sharks; 3-2 victory against the Capitals.

With three new teams joining the league, the NHL split into two five-team divisions on Oct. 16, 1926. The Canadiens, Montreal Maroons, Maple Leafs, Ottawa Senators, and New York Americans were placed in the Canadian Division. The new American Division consisted of the Boston Bruins, Pittsburgh Pirates, and the three new franchises; the Rangers, Detroit Cougars, and Blackhawks.

On Oct. 16, 1960, Bruins forward Jerry Toppazzini became the last non-goaltender to play between the pipes in an NHL game. After starting goaltender Don Simmons was injured, he took over in the crease with 30 seconds left to play. Toppazzini did not face a shot in a 5-2 loss at the Blackhawks.

Three years later, on Oct. 16, 1963, the Bruins and Blackhawks met again at the Chicago Stadium. Stan Mikita scored his fourth career hat trick to lead the Blackhawks to another 5-2 victory. Mikita scored two goals eight years later on this date, in a 3-2 win over the Minnesota North Stars. He joined his long-time teammate Bobby Hull as the only players to score 350 goals in a Blackhawks uniform.

Maple Leafs’ rookie defenseman Jim Dorey made his NHL debut on Oct. 16, 1968. While his first game was not as impactful as Howe’s in 1946, it was still memorable. Dorey racked up 48 penalty minutes — four minors, two majors, two misconducts, and a game misconduct as Toronto tied with Pittsburgh.

On Oct. 16, 1971, Norm Ullman became the fourth player in NHL history to score 1,000 career points. He hit the milestone with two assists during the Maple Leafs’ 5-3 loss to the Rangers.

Lanny McDonald set the Maple Leafs’ team record for the fastest hat trick on Oct. 16, 1976, when he scored three goals in just 2:54, during a 5-5 tie against the Flyers. This was the second career hat trick for McDonald.

Denis Potvin had an assist on Oct. 16, 1986, in the Islanders’ 7-4 win over the Capitals. His helper gave him 684 in his career, putting him past Brad Park for the most assists by a defenseman in league history. He broke the record on the 13th anniversary of picking up his first career point.

The Devils traded Tom Kurvers to the Maple Leafs on Oct. 16, 1989, in exchange for Toronto’s first-round pick in the 1991 NHL Entry Draft. The Devils later used the pick to select defenseman Scott Niedermayer, who played in 893 games and won three Stanley Cups for the Devils during his Hall of Fame career.

On Oct. 16, 1996, Scott Thornton, Martin Rucinsky, and Marc Bureau all scored shorthanded goals as the Canadiens beat the visiting Calgary Flames 4-2. The three shorthanded goals in one game tied a Montreal record set in March of 1948 against the Blackhawks.

Marian Gaborik had a goal and two assists and a goal on Oct. 16, 2001, in the Minnesota Wild’s 3-3 tie with the Sharks. The Wild improved to 3-0-3, which was the best start by any second-year team in NHL history.

Back to the Devils and Stevens; he became the third NHL defenseman to play 1,600 NHL games on Oct. 16, 2003. Sergei Brylin scored with two seconds remaining in regulation to help New Jersey to a 2-2 tie with the visiting Maple Leafs.

Connor McDavid had two goals and two assists in regulation, on Oct. 16, 2018, in the Edmonton Oilers’ 5-4 overtime win at the Winnipeg Jets. McDavid set an NHL record as he picked up a point on each of the Oilers’ first nine goals of the 2018-19 season. He broke the previous record held by Adam Oates, who had a point on the Red Wings’ first seven goals of the 1986-87 season.