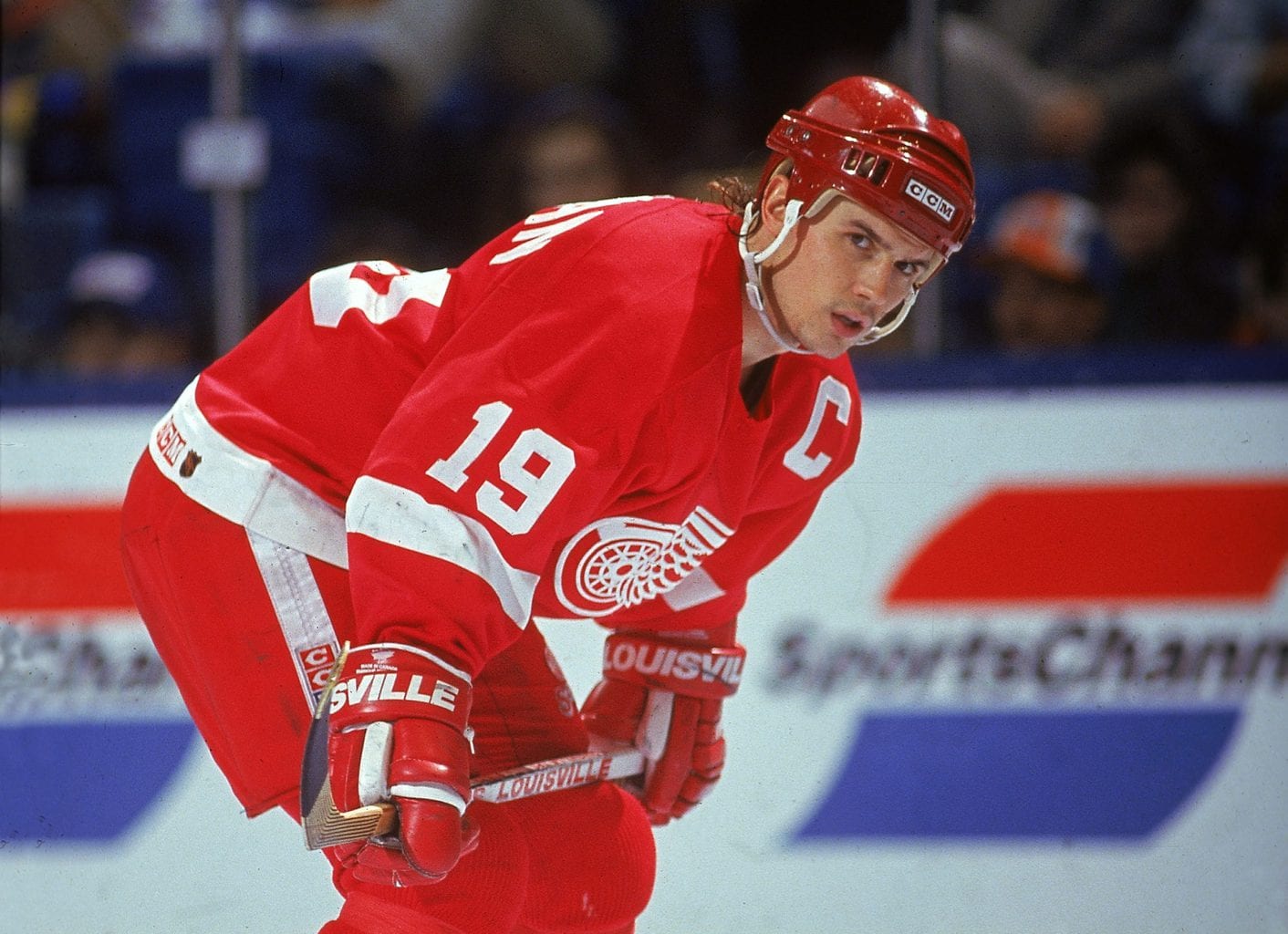 This is a pretty important date for Boston in National Hockey League history. Nov. 20 has also been rather kind to players and fans in Toronto and Philadelphia, as well. Two legendary goaltenders got their numbers retired in the same ceremony, and one of the legends in Detroit accomplished something only one other player had in league history. So, let’s start our daily trip back in time to revisit all the best this date has given us.

The Boston Garden was one of the most historic arenas in the history of the NHL, and on Nov. 20, 1928, the Boston Bruins took to its ice for the very first time. After playing at the Boston Arena for four seasons, the Bruins hosted the Montreal Canadiens in their new home. The rivals from across the border sent a big crowd of nearly 16,000 fans out the doors in foul moods after beating the home team 1-0. The Bruins called the Boston Garden home for 67 years.

A decade later, on Nov. 20, 1938, Tiny Thompson became the first goaltender in league history to record 250 victories in the Bruins 4-1 win over the visiting Detroit Red Wings.

Rookie and future superstar Bobby Orr scored his first career shorthanded goal on Nov. 20, 1966, as the Bruins earned another win over the Red Wings 5-2. He scored 16 shorthanded goals in his 10 seasons with the team.

Orr had another memorable night, five years later, on Nov. 20, 1971. He picked up two of his 83 assists on the 1971-72 season to lead the Bruins over the Chicago Blackhawks 2-1. This performance gave him 300 assists in his career. He retired with 645 career helpers, which are 13th on the NHL’s all-time list for assists by a defenseman.

Hall of Fame Achievements in Toronto

On Nov. 20, 1934, Busher Jackson became the first player in the early history of the NHL to score four goals in the same period. He was the difference-maker in the Toronto Maple Leafs’ 5-2 win over the St. Louis Eagles by scoring four times in the third period.

Legendary center Dave Keon became the third player in Maple Leafs’ history to play in 1,000 games on Nov. 20, 1974, in an 8-5 loss at the Pittsburgh Penguins. In his milestone game, he had a big night, scoring his fifth career hat trick in the losing effort.

The Blackhawks have had a rich history of quality goaltenders throughout the decades. On Nov. 20, 1988, they retired the numbers of two of the greatest netminders to ever play in the NHL. They sent the No. 1 of Glenn Hall and No. 35 of Tony Esposito up to the rafters of the Chicago Stadium on this night.

Hall is second in franchise history with 618 games played, 276 wins, and 51 shutouts. He was the mainstay in Chicago’s net for 10 seasons and won the Stanley Cup in 1961. Esposito still leads the franchise in most goaltending categories, including games played (873), wins (418), and shutouts (74). He set an NHL rookie record with 15 shutouts during the 1969-70 season.

On that night in 1988, the Blackhawks could have used Hall or Esposito as they were beaten 7-4 by the Vancouver Canucks. Darren Pang gave up seven goals on just 23 shots against.

Goaltender Bernie Parent recorded his 45th career shutout on Nov. 20, 1997, to lead the Philadelphia Flyers to a 4-0 win over the Atlanta Flames. Forward Gary Dornhoefer had three assists to lead the offense. Parent retired with 50 shutouts for the Flyers, the most in franchise history.

Tim Kerr scored four goals for his 11th career hat trick on Nov. 20, 1986, and added an assist in the Flyers’ 5-1 victory over the Blackhawks. Kerr scored 363 goals during his 11 seasons in Philadelphia, the third-most in team history.

Ron Hextall became the Flyers’ all-time victory leader with his 232nd win on Nov. 20, 1998, in a 3-1 road win at the Carolina Hurricanes. He broke the previous record held by Parent. He retired at the season’s end with 240 wins, still the most by any Flyers’ goaltender.

Longtime Red Wings captain and current general manager, Steve Yzerman, had a pair of memorable nights on this date. On Nov. 20, 1988, he scored the game-winning goal in the final minute of overtime to give Detroit a 5-4 win in Boston. It was the Red Wings’ seventh straight win, their longest winning streak since the 1964-65 season.

Exactly 11 years later, on Nov. 20, 1999, Yzerman had an assist in a 2-1 loss at the Edmonton Oilers to become just the seventh player in NHL history to score 1,500 career points. He joined fellow Detroit hockey legend Gordie Howe as the only two players to record 1,500 points with one team.

On Nov. 20, 1955, all six of the league’s teams were in action with the Canadiens at the Rangers, Red Wings in Chicago, and the Maple Leafs at the Bruins.  All three games ended in a 1-1 tie. Each contest was the second half of a home-and-home series, with the visiting teams winning on home ice the previous night. Another great stat, there were no goals scored in the third period on this night.

The Buffalo Sabres hosted the Washington Capitals on Nov. 20, 1974, in the first-ever meeting of these two franchises. Rene Robert scored a goal and added two assists, while Gilbert Perreault picked up three assists to lead the Sabres to a 7-3 win.

Paul Stewart made a very memorable NHL debut on Nov. 20, 1979, for the Quebec Nordiques. He got into a fight with Terry O’Reilly, Stan Jonathan, and Al Secord of the Bruins, all in the first period. In an ironic twist, Stewart became an NHL referee after his playing days concluded.

Rookie and future Hall of Famer Al MacInnis scored the first goal of his career on Nov. 20, 1928, in the Calgary Flames’ 4-4 tie with the Hartford Whalers.

Martin Brodeur made 27 saves in winning his 12th consecutive game, a new team record, on Nov. 20, 1997, to lead the New Jersey Devils to a 5-1 win over the New York Islanders. This was the Devils’ eighth straight win, also a team record.

On that same night, Ray Ferraro scored his 350th career goal in the Atlanta Thrashers’ 4-3 loss at the Sabres.

Dan Fritsche became the first Ohio-born player to score a goal for the Columbus Blue Jackets on Nov. 20, 2003, in a 3-0 win over the Red Wings.

Reilly Smith scored his eighth-career shorthanded goal with the Vegas Golden Knights on Nov. 20, 2021, to surpass William Karlsson (seven) for the most in franchise history. It was done in a win too, as his Golden Knights beat the Blue Jackets 3-2.

In that same game, Zach Werenski became the first defenseman from the 2015 Draft class to reach 200 points and the second in Blue Jackets history to reach that mark (Seth Jones in 338 games). He also played in his 350th NHL game.

On Nov. 20, 2021, Roope Hintz scored two shorthanded goals in a 4-1 win over the St. Louis Blues, becoming only the fourth player to score multiple shorthanded goals in a game. The others were Bill Collins in 1970, Dirk Graham in 1986, and Neal Broten in 1988. He, however, was the only one to do so on home ice.

Finally, on that same night, Sergei Bobrovsky entered the Panthers’ record books when he picked up points for the 10th straight game in a 5-4 win over the Wild. He became the second goalie to reach that feat in franchise history joining Roberto Luongo who did it in 2015-16.

Just 13 current and former NHL players were born on this date. The best of this small group are Bob Murdoch (76), John Van Boxmeer (70), John MacLean (58), Max Pacioretty (34), and the late Hall of Famer Billy Burch.