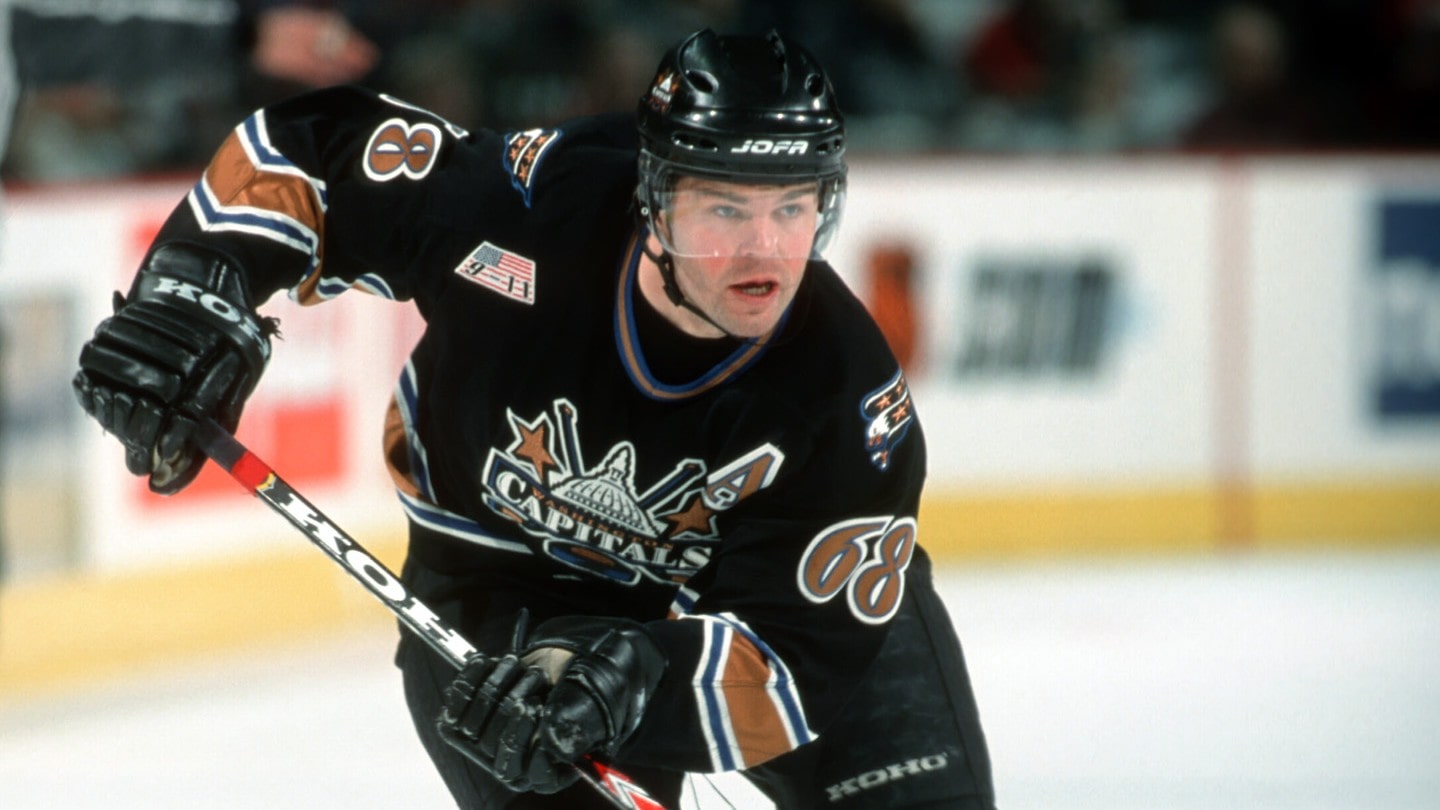 Jan. 22 is a very eventful date in the history of the National Hockey League. It has given us everything from big personal milestones, great goaltending, and even a pair of games played under very odd circumstances. Let’s buckle in for our daily trip through time and look back at the best this date has had to offer.

A Pair of Unusual Games

The Detroit Red Wings sported a strange look on Jan. 22, 1966, for their game versus the Montreal Canadiens at the historic Forum. Their sweaters were stolen from the famed arena’s locker room the night before, so they had to wear those of their junior team in Hamilton. The new uniforms did not deter the Red Wings on this night as goaltender Roger Crozier picked up his 15th career shutout in a 3-0 victory.

A huge snowstorm hit the northeast on Jan. 21, 1987, and it caused major problems for the New Jersey Devils’ game against the Calgary Flames that evening. After 18 inches of snow fell throughout the day, only 334 fans of the expected 11,000 braved the elements to make it to the Brendan Byrne Arena.

After a two-hour delay, the puck was finally dropped in a near-empty arena, something hockey fans got used to seeing in the COVID era. Those who did show up were treated to a 7-5 Devils win that included Doug Sulliman’s only NHL hat trick. During the game, team employees went around and gathered the personal information of all the fans and entered them in the very exclusive “334 Club.”

Jan. 22, 2003, was one of the most eventful nights in recent NHL history. Starting in Edmonton, where Brett Hull scored a power-play goal in the Red Wings 4-3 overtime loss to the Oilers. The goal was the 699th of his career and made him just the second player to ever score at least 20 goals in each of his first 16 seasons in the league.

Jaromir Jagr scored twice to give him at least 25 goals in each of his first 13 NHL seasons. He also added an assist in the Washington Capital’s 5-3 win over the visiting Carolina Hurricanes. Olaf Kolzig made 35 saves to become the first goaltender in team history to win 200 games. He still holds the franchise record for wins with 301.

Joe Nieuwendyk scored the game-tying goal with 13 seconds remaining in regulation before lighting the lamp in overtime to give the Devils a 5-4 at the San Jose Sharks. He also added a pair of assists in goaltender Martin Brodeur’s 350th career game.

Mike Modano had a big night in the Dallas Stars’ 4-2 win over the visiting Columbus Blue Jackets. He dressed for his 992nd game, tying Neal Broten for the most in franchise history. He then picked up his 594th assist, breaking the team record, which Broten also held.

Finally, Steve Rucchin, playing in his 500th NHL game, scored two goals and an added assist in the Mighty Ducks of Anaheim’s 6-5 home victory over the Los Angeles Kings. He became just the second player to appear in 500 games with the Mighty Ducks, joining Paul Kariya.

Rogie Vachon became the first goaltender to win 100 games for the Kings on Jan. 22, 1976, in a 6-3 victory over the visiting Toronto Maple Leafs. Mike Murphy scored four goals, including three in the third period for his second career hat trick and first with Los Angeles. Hall of Famer Marcel Dionne set a new team record with five assists.

Exactly two decades later, on Jan. 22, 1996, Allan Bester picked up his first NHL victory in five years and 297 days when he led the Stars to a 6-4 win over the Vancouver Canucks. He was called into duty after both Andy Moog and Darcy Wakaluk were lost to injury.

Craig Anderson made 30 saves for his first career shutout and win on Jan. 22, 2004, as the Chicago Blackhawks beat the Blue Jackets 7-0. He entered the night with a 0-11-2 record to start his career. He has since won 295 games with the Blackhawks, Florida Panthers, Colorado Avalanche, Ottawa Senators, Capitals, and Buffalo Sabres.

Replated – Craig Anderson: One of the Ottawa Senators’ All-Time Greats

Brodeur stopped all 24 shots he faced for his 120th career shutout on Jan. 22, 2013, to lead the Devils to 3-0 blanking of the Philadelphia Flyers. This was his 10th career shutout against the Flyers, who lost their third straight game to start the season for the first time since 1994-95, the last time the season started late due to a lockout.

Jean Pronovost scored twice in the first period on Jan. 22, 1978, to become the first player in Pittsburgh Penguins’ history to score 300 goals. His milestone tallies were the difference in a 3-1 win over the visiting New York Rangers.

Pavel Bure scored two goals, including the game-winner overtime on Jan 22, 2000, to lead the Panthers to a 4-3 victory over the visiting Boston Bruins. His first goal, in the middle frame, gave him 300 in his career and made him the seventh-fastest player in NHL history to reach this milestone. His performance gave him 34 goals on the season, setting a new Florida team record.

Peter Laviolette won the 500th game of his career on Jan. 22, 2017, as he coached the Nashville Predators to a 4-2 victory at the Minnesota Wild. The Predators scored the last four goals of the night after falling behind 2-0 in the first period. Laviolette joined John Tortorella as the only two U.S.-born head coaches to win 500 NHL games.

The Canucks celebrated their 1,000th game in franchise history on Jan. 22, 1983, with a 4-3 win over the Oilers. Defenseman Doug Halward led the offense by scoring the first two goals of the contest.

The Penguins finally picked up their first win in Edmonton on Jan. 22, 1986, when they beat the Oilers 7-4. They had gone 0-9-1 in their first 10 trips to Alberta after the Oilers joined the NHL at the start of the 1979-80 season. Mike Bullard scored his fifth career hat trick to lead the offense, while Mario Lemieux recorded four assists.

Another 10-game losing streak ended this night when the Red Wings beat the Bruins 6-5 in overtime. Warren Young scored two goals, including the game-winner, to snap Detroit’s 0-7-3 streak against Boston on home ice.

Despite a total of 17 goals scored on Jan. 22, 1994, Rangers goaltender Mike Richter was named the most valuable player of the NHL All-Star Game. He played the second period and only allowed two goals on 21 shots and denied Bure on three breakaways. His MVP win was very popular with the fans who packed his home arena, Madison Square Garden. Senators’ rookie Alexei Yashin scored the game-winning goal as the Eastern Conference beat the Western Conference 9-8.

Cam Neely scored three power-play goals for his 12th career hat trick on Jan. 22, 1995, as the Bruins beat the Flyers 4-1 for their eighth straight opening-night victory. Hall of Famers Ray Bourque and Adam Oates each picked up three assists. Rookie goaltender Blaine Lacher picked up the win in his NHL debut.

On Jan. 22, 1998, Minnesota’s new NHL franchise announced that their new team would be called the “Wild.” This news came over two and a half years before they began play at the start of the 2000-01 season.

Hat tricks were the name of the game on Jan. 22, 2019, when the Capitals hosted the Sharks. Alex Ovechkin scored his 23rd career hat trick, tying Jari Kurri for 10th in NHL history. However, it wasn’t quite enough as Tomas Hertl scored three goals in the Sharks’ 7-6 win in overtime. His third goal was the game-winner, making him the first player in team history to score a hat trick that included an overtime goal.

On Jan. 22, 2022, Steven Stamkos scored his 20th goal to tie Vincent Lecavalier for the most in Lightning history with 12. It was in a win too, as the Lightning beat up the San Jose Sharks by a score of 7-1.

Four Hall of Famers with ties to Montreal were all born on this date. The late Canadiens’ goaltending great Bill Durnan was born on Jan. 22, 1916. Emler Lach, a member of the famed “Punch Line,” was born two years later. All-star defenseman and former Habs general manager Serge Savard was born on Jan. 22, 1946. Mike Bossy, a legendary goal scorer for the New York Islanders, was born in Montreal on this date in 1957.