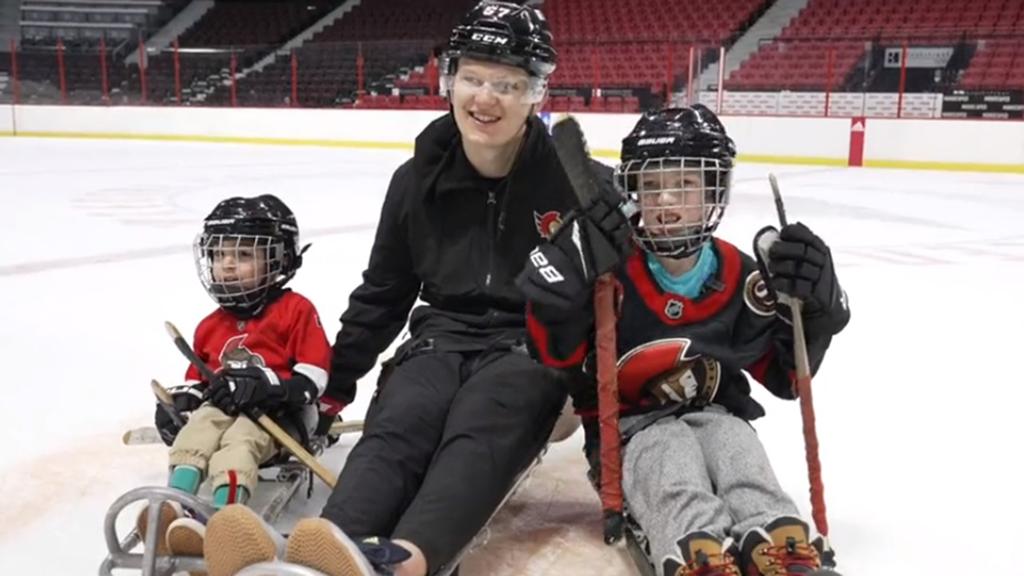 The 9-year-old and his younger brother, Cameron, got to meet the Senators players and hop on the ice to shoot around on their sleds. The Senators shared video of the ultra-cute encounter on social media.

Tweet from @Senators: Following today���s practice, Easton and his younger brother Cameron hopped on the @CdnTireCtr ice with #Sens Captain @BradyTkachuk71 for some sledge hockey! pic.twitter.com/rvmN2HTZhN

Tkachuk went on his sled without a helmet, which did not fly with Easton.

“Why aren’t you wearing a helmet,” Easton asked the Senators forward.

The boys raced Tkachuk on their sleds and shot pucks on net.

“This has been a lot of fun,” Tkachuk said in the video. “[It’s] hard work. I’m sweating more than I did in practice.”

After playing on the ice, Easton and Cameron received signed sticks from Tkachuk and got to check out his locker stall.

“We were really happy that Brady was willing to jump on with them and push the sport,” Easton’s dad Ryan Harris said in the video. “They all know about it [sledge hockey], but we want the rest of the community to learn about it. Everybody that has a disability can get on a sled, there’s a way to get them on there…It’s a great community.”