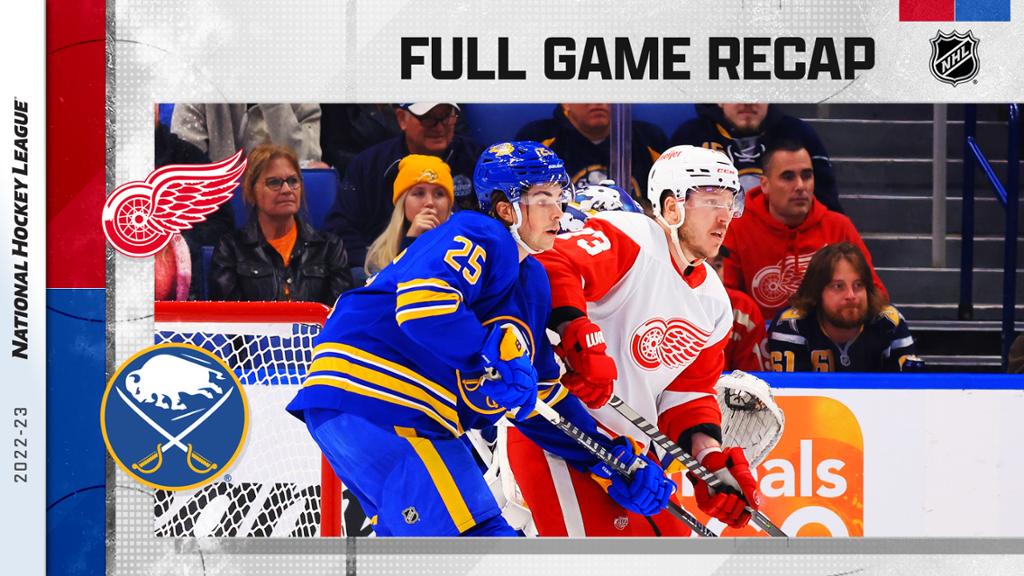 BUFFALO — Tage Thompson had a hat trick and three assists, and the Buffalo Sabres defeated the Detroit Red Wings 8-3 at KeyBank Center on Monday.

“I think obviously getting the win’s always a good feeling, especially 8-3,” Thompson said. “I thought we played a really good game all the way around, but obviously it’s a nice feeling when you’re scoring, you’re contributing on the score sheet. It’s nice.”

Jeff Skinner had a goal and two assists, Rasmus Dahlin had a goal and an assist, and Kyle Okposo had two assists for the Sabres (6-3-0), who have won five of their past seven games. Eric Comrie made 15 saves for his first win in three starts.

Olli Maatta, David Perron and Dylan Larkin scored for the Red Wings (4-3-2), who have lost three of four. Alex Nedeljkovic made 38 saves.

“We didn’t show up and they showed up,” Larkin said. “No matter what level of hockey you play, you don’t show up it’s going to be embarrassing. We’ve got to find it; ‘it’ meaning the pride of. You get in the games, one-goal game there in the third [period], two-goal game, like, let’s go, let’s win battles, let’s make it an even game. We just lost way too many battles tonight.”

Thompson gave Buffalo a 1-0 lead at 16:52 of the first period, one-timing a cross-ice pass from Skinner in the left face-off circle.

Maatta tied it 1-1 at 1:26 of the second period when Andrew Copp sent a backhand pass from behind the net to the defenseman at the top of the left circle.

Jack Quinn put the Sabres back in front 2-1 at 5:22 with a one-timer from the right circle for his first goal of the season.

“It’s nice, I guess,” Skinner said of the milestone. “It means I’ve been around a while, I guess. But I think for me, you’re not going to score goals unless you’ve got five guys on the same page out there. Obviously, it means that you had some good chemistry with guys over the years. I probably had a couple open nets, a couple good passes from some linemates, probably.”

Thompson made it 4-1 at 18:30, scoring from the slot on a power play. He had nine shots on goal Monday and has 25 in the past three games

“I think the confidence has been there from the start of the season. I think maybe the first three games I wasn’t getting enough shots, maybe being a little too cute,” Thompson said. “I just tried to simplify and get pucks to the net, whether it’s a clear lane to the net or not. Just find ways to get it to the net and then from there if it doesn’t go in, at least it’s creating a rebound and we’re getting possession from it.”

Perron cut it to 4-2 with 57 seconds remaining in the period, and Larkin made it 4-3 at 4:19 of the third when his pass attempt ricocheted off Buffalo defenseman Owen Power‘s skate back to him at the bottom of the right circle for the short-handed goal.

“They get a [power play] there, kills momentum,” Larkin said. “The pucks in our net and then the embarrassment started.”

Dylan Cozens scored short side from the right circle to push it to 6-3 at 14:47.

“It’s enjoyable to watch ‘Tommer,’ having history with him, watching him when he was 16 years old, watching him grind his way to this point in his career,” Sabres coach Don Granato said.

“The thing that sticks out is the excitement of the bench and the players around him. It really tells you the person he is. … To see that and see a kid that it took so long for him to flourish and be recognized for the talent that he is, to see him fight through that and now start to get rewards for that work, it’s definitely enjoyable.”

Thompson, who factored into each of the final three goals (two goals, one assist) in a 4-3 overtime win against the Chicago Blackhawks on Saturday, become the second player in Sabres history to have a point on eight consecutive goals since Pat LaFontaine in 1992-93.

“I didn’t know about that stat, but it’s pretty cool,” Thompson said. “Obviously, he’s one of the best to play the game, so to be mentioned in the same breath is a pretty cool feeling.”

Rasmus Asplund scored with 39 seconds remaining for the 8-3 final.

NOTES: Thompson became the sixth player in Sabres history with six points in one game, and the first since LaFontaine on Feb. 10, 1993 (one goal, five assists). His hat trick is the 22nd in NHL history on Halloween and the first since Michael Frolik of the Calgary Flames in 2015. … Okposo has multiple points in consecutive games for the first time since Jan. 9-18, 2018 (three games). … Larkin scored his first short-handed goal since Oct. 30, 2018.