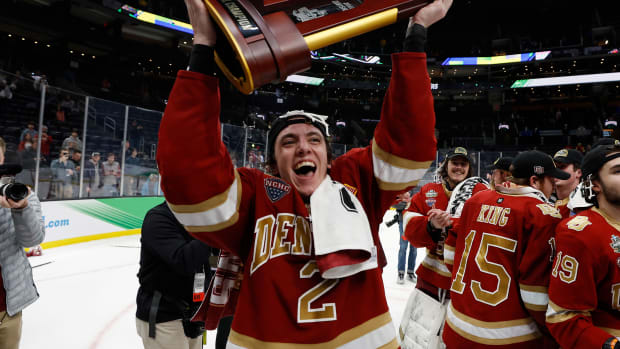 On this episode of The Hockey News American Pipeline Podcast with Sydney Wolf and Mike Stephens:

– Who are the most notable NCAA and USHL players on the NHL Central Scouting mid-term rankings?

– Zachary Morin was a potential top pick in the upcoming QMJHL draft, but he tendered with USHL Youngstown, which means he’s more likely going down the NCAA route. How significant is this, and what can Morin bring to the league?

– Tristan Broz may finally be fitting his footing in the NCAA. A second-round pick of the Pittsburgh Penguins, he had four goals in one game and a six-point weekend last week.

– The transfer portal is starting back up, and quite a few Ivy League players have already put their names in the mix.

– Who are the Colorado Avalanche’s prospects in the American Pipeline? Sydney and Mike go through the names, including Sean Behrens, Matthew Stienburg, and Cale’s brother, Taylor Makar.

– And more, including new arenas and Kaidan Mbereko losing some teeth. So check out the full episode on your preferred platform.

For more shows and episodes on the NHL, junior hockey, the AHL, ECHL and women’s hockey, check out THN.com/podcast or click on “Podcasts” in the menu.