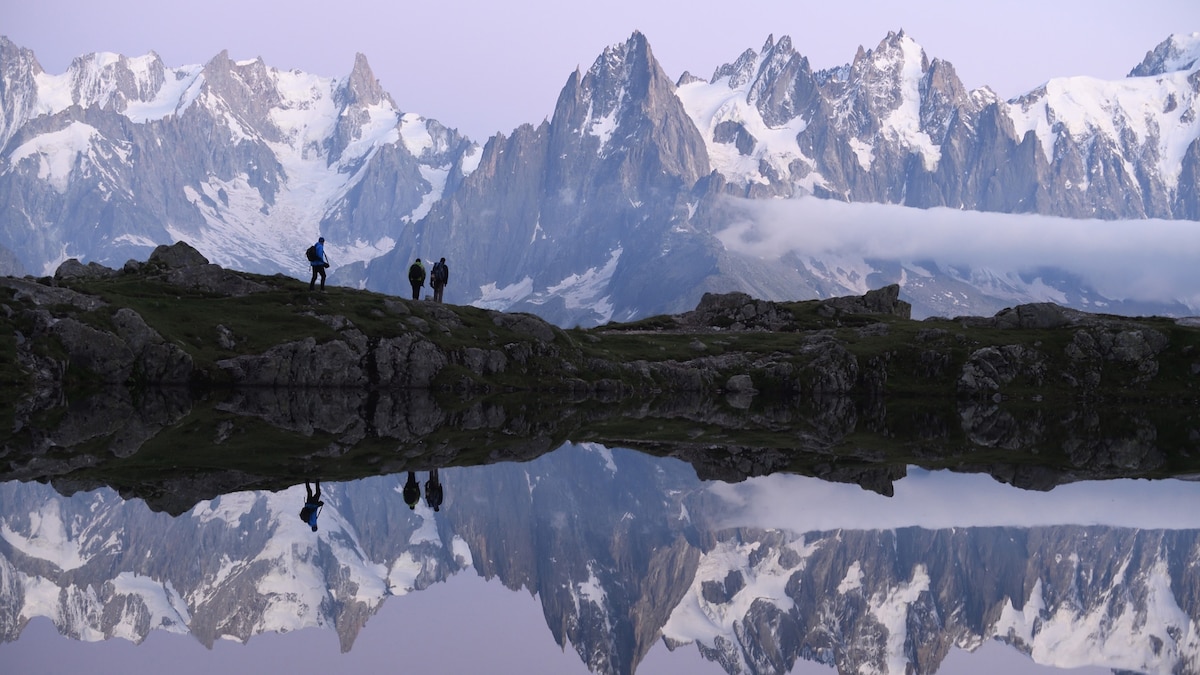 On the majestic Marmolada, the Queen of Italy’s Dolomites, the first Sunday of July was a beautiful day for hikers—the sky almost cloudless, a warm 82 degrees Fahrenheit in the valley. But for the mountain, even the 50°F near the 11,000-foot peak was sweltering. From its glacier, the largest in the mountain range, a section the size of two football fields broke off. Ice and debris thundered down with the force of a collapsing skyscraper. Eleven people—two of them experienced mountain guides—never made it home.

“I saw pictures of what it looked like before the collapse, and I would have taken my own son there that day,” says Alberto Silvestri, an Italian guide. For alpinists and locals, the tragedy was a terrifying reminder of just how much the mountains’ beauty masks their risks.

Mountain ranges cover a quarter of all the planet’s land, and the millions of people who call them home have always lived with their natural hazards. But now, global warming is fundamentally changing their makeup. Their temperatures have risen up to 50 percent faster than the global average, and even when summiting the peaks of the Himalayas, alpinists now ditch their expedition suits for lighter jackets—a small comfort amid elevated dangers.

Scientists calculating the risks of natural disasters in the mountains, like Perry Bartlet at the Federal Institute for Forest, Snow, and Landscape Research (WSL) in Switzerland, needed to update their models. “The scale of what we calculate has changed completely—the events are much larger,” he says.

Earlier this month, another glacier collapsed in Patagonia, and in Kyrgyzstan in July. As permafrost thaws, rock and soil once bound by below-freezing temperatures is tumbling down.

Hikers at altitude and villagers in the foothills are grappling with a vital question: As mountain conditions become more perilous than ever, how can they stay safe?

It’s a question that plagues Roberto Rota, the mayor of the mountain village of Courmayeur, nestled on the Italian side of the Mont Blanc, Europe’s highest peak.

Drawing a path down to the mouth of the Mont Blanc tunnel that connects Italy and France, the unstable Monte de la Saxe slope could unleash so much rock and soil, it would be recorded by seismographs across the globe. Above the hamlet of Planpincieux, from two precariously suspended glaciers, enough ice to fill two Empire State buildings is at risk of collapsing. In the worst-case scenario, Rota says, “it would completely destroy all of Planpincieux.”

The responsibility weighs heavily on his shoulders, Rota says, and sometimes, the former ski instructor wonders if he was insane to have run for the office. But he says that the systems that he, his predecessors, and scientists have put in place help him sleep at night.

Ground-based radar aimed at unstable peaks and slopes measure movement round the clock—if velocity increases, so does the chance that it will come down. Satellite and drone images are analyzed, too. Rota gets a daily email at 2 p.m. with data and analysis. On good days, he sees a yellow box indicating a medium-level threat of the glaciers collapsing.

On the worst days, the box is a deep crimson. Locals like Guiliana Patellani remember. Two years ago, traffic lights along the road to Planpincieux switched to red, stopping people from moving into the potential disaster zone, and alerts popped up on the phones of those in potentially affected areas. Distressed officials came knocking on the doors of her stone house, instructing Patellani and her family to pack their dearest possessions and move to an emergency evacuation site.

After two nights, when danger subsided, they moved back in. This summer, her sister’s husband, a glaciologist, called to cancel their visit. “He said with the extreme heat, it’s too dangerous,” Patellani recalls.

But nobody here seems worried. Locals have seen avalanches and rockslides before, Patellani says, and the house her grandmother built in 1936 has never been touched. “And we have the monitoring system,” says her teenage granddaughter, Cecilia, who spent the summer foraging for mushrooms and blueberries.

But not everything can be averted. At a creek just a few hundred yards from their house, the family shows me the destruction wrought by a landslide, triggered by heavy rain on a Friday evening this August. A 21-foot-high wall of rock and boulders took out two bridges, cutting off the hamlet, and smashed the aqueduct, leaving 30,000 without drinking water.

“There’s never going to be one hundred-percent safety,” says Fabrizio Troilo from the Secure Mountain Foundation. At its headquarters, radars monitored by the Aosta Valley are aimed at the Monte de la Saxe slope.

Farther up the valley, Daniele Giordan, a geologist with Italy’s National Research Council, has spent the past 10 years perfecting the glacier monitoring system. Predictions and scenarios are now so precise, he and his colleagues are confident that it’s among the best in the world, perhaps a role model for others.

They fly helicopters over the region’s 180 glaciers regularly, their eyes focused on new crevasses. They update a photo catalog to monitor their evolution, and hike to glacial lakes that could break.

Naturally, there are limits. Meltwater accumulating inside the glacier is a major concern. This summer alone, several meters melted off the surface of the Alps’ glaciers, an amount so dramatic it far exceeded scientists’ worst predictions to date. “These are all surface observations, but there are processes we can’t see, because they occur inside the glacier,” Giordan says.

On the French side of Mont Blanc, Jean-Marc Peillex, the mayor of the resort town Saint Gervais, knows just how much destruction hidden meltwater can cause: In 1892, water inside the Tête Rousse glacier had build up so much pressure, it burst through the ice like a balloon.

The 131-foot wave carried ice, snow, and all sorts of debris, killing 200 people and leaving only the elementary school standing. Following the catastrophe, authorities began drilling holes in the glacier almost every year, hoping that excess water would drain. For decades, nothing ever came out. In 2009, researchers tasked with checking whether it would be safe to suspend the project found that they’d simply been drilling too high up. Farther down, 80,000 cubic meters, enough to fill 32 Olympic-sized pools, were poised to rupture the glacier once again.

“It was sheer luck that we found it in time,” says Peillex. The water is now drained regularly—at the right spots—and, if that fails, sensors dangling from ropes above the glacier would trigger a new alarm system. Locals would have 15 minutes to flee to higher elevation.

Maintaining safety for the 20,000 people who attempt to summit Mont Blanc each year has been Peillex’s second headache. Perceived as an easy trek, the peak has turned into a bucket-list item for inexperienced hikers. It also holds the continent’s mountain fatality record, with an estimated 100 people dying each year.

When even nighttime temperatures at the peak were above freezing this summer, rockfalls, already the leading cause of death, rose in frequency. The mountain had become too unpredictable. Local guide associations canceled trips to the summit, and authorities issued warnings. Peillex proposed that anyone still attempting to summit should deposit 15,000 euros, enough to cover rescue efforts and a funeral service. Though that was never implemented, before the end of July, high-altitude mountain huts like the 12,516-feet Goûter refuge were closing. Without shelter or guides, the two-day trip became all but impossible.

Yet about a dozen people a day still tried, says Tsering Sherpa from the “Brigade Blanche” deployed by Saint Gervais to patrol the routes to the summit. Hikers without crampons, ice picks, warm jackets, or a reservation for the bustling refuges were routinely asked to turn around.

When I visited in early September, the weather had cooled, and the refuges had just reopened. In the office of the Saint Gervais Mountain Guide Company, one of oldest in the world, a group of young doctors from University Hospital of Montpellier, in France, were planning their final preparations for their summit, thrilled to get a shot at making it to the peak.

They’d been cautious, taking a four-day preparation course, where they acclimated to high altitude and practiced using ice picks and walking with crampons. Such courses are increasingly popular, and guides say they notice that clients are more aware of the risks.

But this summer, conditions were so unstable even veteran alpinists struggled to make their climbs. Alpine rescue organizations were busier than ever. For hundreds of missions, they could only salvage climbers’ bodies, many killed by rockfalls on terrain that others had reported as stable just days earlier. The small province of Salzburg, Austria, alone counted 24 deaths so far this year. “That’s more deaths than we’ve ever had. Even for the most professional climbers, it’s become very challenging,” says mountain rescuer and dog handler Maria Riedler.

Unwritten rules that had kept mountaineers safe for generations no longer apply. Crossings of the Mont Blanc’s Grand Couloir, a 30-second passage prone to rockfalls, used to be considered safest in the early morning. This July, boulders were tumbling down around the clock.

“Definitely the mountains will become more and more dangerous,” says Pietro Picco, a guide who grew up at the foot of the Mont Blanc massif. Certain routes are no longer doable. On others, the required skill level has increased, and guides are taking ever-smaller groups as a result.

“If you want to ascend a certain summit, you will need to be 100 percent flexible” with timing, Picco says. He and other guides predict that the season to climb peaks like the Mont Blanc will end in July, and perhaps pick up again for a few more weeks in September. And more and more, when a summit isn’t safe, hikers will have to choose alternative climbs, or opt for cycling, rock climbing, or canyoning instead.

In Courmayeur, Mayor Rota is working on a new set of pictograms that would warn people. He envies mayors on Italy’s seaside, where a single red flag keeps tourists out of the water.

Peillex, too, wishes the risks would be taken more seriously. The glacier alarm system cost $7 million, yet when a storm accidentally triggered it, only about a fifth of residents evacuated.

“It’s a shame because after all this effort to protect people, they don’t take the last step to protect themselves,” he says, standing in front of dozens of new houses built right in the area where the 1892 ice and snow avalanche surpassed the height of the 2011 tsunami in Japan. Today, it would kill not 200, but 2,000 people. “We have to understand that nature is stronger than us,” he says, “and that it’s us who have to change our ways.”

The author of 5 books, 3 of which are New York Times bestsellers. I’ve been published in more than 100 newspapers and magazines and am a frequent commentator on NPR.