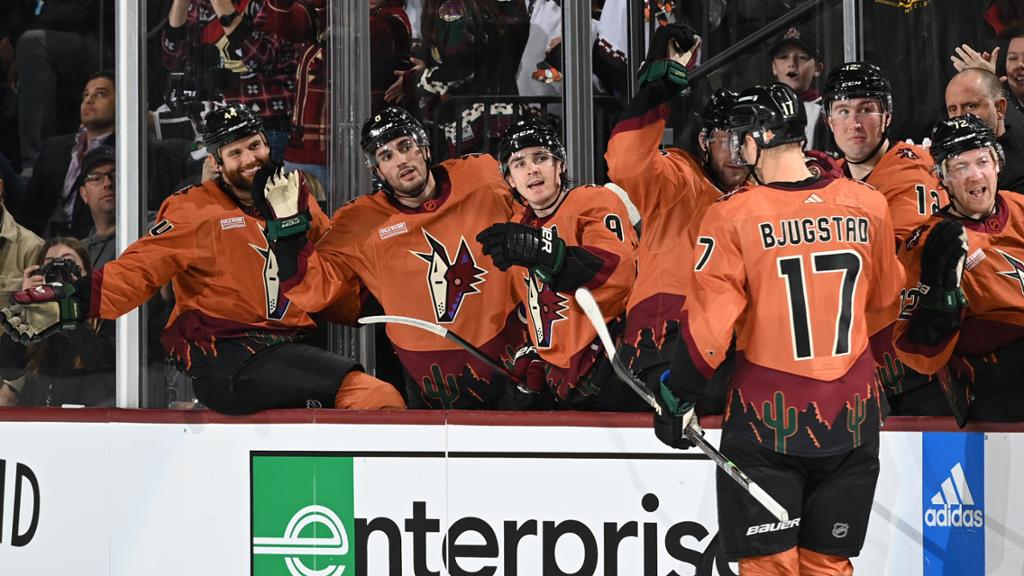 The Arizona Coyotes had one of the toughest schedules in the league through 32 games this season, traveling up and down North America while only playing 10 games at Mullett Arena.

Friday’s home win over the Los Angeles Kings may have been just a little bit sweeter because of it.

Nick Schmaltz scored, Nick Bjugstad potted the shootout winner, and Karel Vejmelka made 26 saves as the Coyotes topped the Kings 2-1 in a shootout on Friday. Vejmelka stopped all three L.A. attempts in the extra frame to secure the win for Arizona, which is now 5-3-2 at Mullett Arena.

The team now has three days off before taking on the Colorado Avalanche at home on Tuesday.

“The schedule is tough enough just on a normal schedule, so when you have a long road trip and all of that, it makes it a little bit tougher,” head coach André Tourigny said. “I think our guys managed it unbelievably.”

Alex Iafallo scored for the Kings (19-12-6) and Jonathan Quick made 23 stops as Los Angeles had its four-game winning streak snapped.

Bjugstad scored the only goal in the three-round shootout, making a move to get Quick to commit before wristing it up and over the sprawling netminder. Vejmelka was perfect in the extra frame.

“I had two choices going down, and depending on where the goalie’s at, I kind of adjust in the moment,” Bjugstad said. “Thankfully it worked out.”

Things have been working quite well at Mullett Arena, in fact, where the Coyotes (11-16-5) have become an increasingly tough team to play against. The team has earned at least one point in five of its last six games in its temporary home, beating teams like the Boston Bruins, New York Islanders, and Kings in the process.

Arizona played 22 of its first 32 games on the road this season, and the energy created during home games is noticed by the players.

“It’s fun. The Mullett is fun to play in,” Bjugstad said. “We’ve done pretty well here, and we’re starting to use it to our advantage. We appreciate the fans that come out here and make it loud, so we kind of feed off that energy.”

“The fans are unbelievable and really loud every single night,” he said. “We are happy for that, and we just try to win every game, especially at home.”

The Coyotes gave the crowd plenty to cheer for early in the game on Friday.

Schmaltz opened the scoring at 9:45 of the first period after he took a pass from Keller from just outside the left circle and snapped it past Quick. The goal came just eight seconds into a 5-on-3 advantage, and gave Arizona a 1-0 lead midway through the first.

The Coyotes finished the first frame with an 11-5 advantage in shots, but the Kings responded in the second with a power-play goal of their own after Iafallo one-timed a shot past Vejmelka at 11:54 of the period.

That score held up until the shootout, where Bjugstad’s timely goal and Vejmelka’s heroics between the pipes sent the Coyotes into the holiday break with a win. The victory was especially meaningful considering Friday’s game was the fifth straight contest in which Arizona entered the final frame tied.

Even so, once the break is over, it’s right back to work.

“We’re in it every night and with the schedule we had we needed to be resilient, but now we cannot be satisfied,” Tourigny said. “We need to take the next step and find another gear.”

The Coyotes are back in action on Tuesday against the Avalanche, and the game will be broadcast on Bally Sports Arizona Extra (TV) and ESPN 620 AM (Radio). Puck drop is scheduled for 7 pm MST.