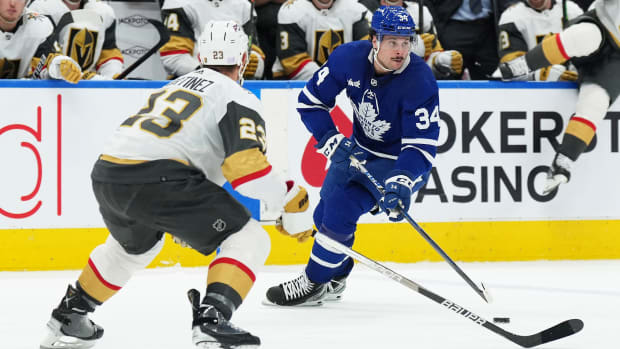 What does it mean to go “all-in”? Well, that’s a great question.

To me, going all-in means throwing every single possible answer at the wall in the hopes that it sticks. It means plundering your prospect cupboard to upgrade your roster. It means shuttling out draft picks for real, tangible players. It means spending as much money on talent as humanly possible and leaving the consequences for another day.

That’s what being all-in is about, baby. And in today’s NHL, more teams are all-in than ever before, with the pressure to win at all costs never being higher.

So, let’s take a look at the five most all-in teams this season.

It’s now or never for the Maple Leafs. There is no building for the future, no trusting the process. Winning is the only thing that matters. Results must come at any cost.

Why? Well, their GM is on the final year of his contract, their franchise face is almost a year out from free agency and after five straight failed attempts to get past the first round of the playoffs – the bare minimum for a contender, I might add – the chips have been pushed directly into the middle of the table.

No one is more all-in than the Maple Leafs this year. The future of their entire current era of hockey rests upon the team’s performance this season. Fail to get over the hump and, at the very least, win a round, and everything changes. Kyle Dubas and Sheldon Keefe are as good as gone. The odds of Auston Matthews walking in free agency the next summer notably increase. And the team’s existing core of Mitch Marner, William Nylander, and even John Tavares will then be playing for a newly instated regime that did not sign any of them – perhaps paving their own roads out of town, too.

The Leafs spent the off-season fortifying their roster with veteran depth pieces across the board, re-signing Mark Giordano, trading for Matt Murray, hanging on to Jake Muzzin and bringing in the likes of Calle Jarnkrok, Zach Aston-Reese and Jordie Benn. Those are win-now moves, the kind a team with everything on the line makes to ensure they leave no stone unturned in their quest for success. And after entering the season with four dollars in cap space, they have the financials to back it up.

Just look at that LTIR total. That’s all the proof you really need.

From their first moment as an NHL franchise, the Golden Knights have been all-in. This is a team that will upgrade its roster at all costs, shuttling out anyone from respected veterans to first-round draft picks to blue-chip prospects if it gives them an edge in their quest for a Cup.

Vegas has taken that to the extreme over the past 24 months, signing high-profile free agents like Alex Pietrangelo to massive contracts, emptying their cupboards to trade for a superstar like Jack Eichel and effectively giving away the likes of Max Pacioretty for free in order to make room for them. Heck, the club willingly took on Shea Weber’s nearly $8-million cap hit until 2027 just to make the numbers work.

It doesn’t get more all-in than that.

Look at the Golden Knights’ roster – their key players are aging by the day. Mark Stone is 30 with serious miles on his body. William Karlsson is 29. Jonathan Marchessault and Reilly Smith are 31. Pietrangelo is 32. Alec Martinez and Phil Kessel are 35.

This core, outside of Eichel and Shea Theodore, doesn’t have a ton of time left together – at least with everyone at the top of their games.

Success is needed now. And the Golden Knights have gone down every avenue – financial and hockey-related, to make it happen.

Winning a Cup obviously affords teams a certain amount of breathing room when it comes to expectations, so the Avalanche aren’t exactly feeling the heat this year to finally get over the hump. They’ve already done that, continuing to perform as one of the top teams in the entire NHL, which doesn’t seem likely to change any time soon. Much of that is due to the organization’s remarkable stability, with Colorado’s core locked in long-term, their stars either in the middle of or just entering their primes, and the coaching and management teams more or less set in stone.

But difficult moves are coming, make no mistake. Just look at the names in need of new deals at the end of this season: J.T. Compher, Alex Newhook, Bowen Byram, Andrew Cogliano, Evan Rodrigues and Martin Kaut. That’s a big chunk of the Avs’ vaunted depth, and a few of those – namely, Newhook and Byram – won’t be cheap, either.

Add Nathan MacKinnon’s $12.6-million raise into the mix next season and not everyone is bound to come back. It’s impossible. Therefore, the 2022-23 season becomes all the more important again.

Honestly, the Avs will be fine if they don’t go back-to-back. But when it comes to the future of this group as it’s currently constructed, and the move they’ve made to keep it intact through this year, Colorado is living in the moment.

If the Flames had kicked off their season with Huberdeau and Weegar still in need of extensions, they’d be at the top of this list. No question. Acquiring two superstars on the precipice of hitting age 30 and free agency more or less forces you into win-now mode out of necessity. But with both players locked in for the next eight years, along with Nazem Kadri under contract for seven, the Flames have a bit of leeway in their quest for a Cup.

But not as much as you think.

The Flames’ core is getting old. Huberdeau and Weegar’s aging curves have already been established, but the likes of Kadri, Jacob Markstrom, Chris Tanev, Mikael Backlund, Blake Coleman and Tyler Toffoli are already well into their 30s, with Elias Lindholm coming in close behind at 27. The Flames don’t really have any prospects ready to take over in the event father time catches up to any of those players, while their thinned crop of draft picks over the next three years and tight cap situation will make it difficult to add talent through the draft or free agency.

Basically, if the Flames are going to get it done, this is the group that will do it. And that is as “win-now” a sentence as any.

Patrice Bergeron’s agelessness kind of throws a wrench into this entire ranking, honestly. The guy just won’t slow down, even at 37 years old and with years of gruesome injuries riddling his body.

That doesn’t change the facts, though. Regardless of Bergeron’s superhuman abilities, the Bruins are more or less in Last Dance mode at the moment, with the clock ticking on their contention window as currently constructed.

David Pastrnak is a free agent at year’s end. David Krejci is 36 and came back to Boston for one last hurrah. Brad Marchand is 34. Taylor Hall is 31. Charlie Coyle is 30. Craig Smith is 33. Hampus Lindholm is 28 and just starting an eight-year deal. You get the picture.

This very well could be the last year of the Bruins as we know them. Bergeron was already contemplating retirement over the summer before re-upping on a one-year deal, and, once he goes, this entire operation will undergo a changing of the guard. Who knows who will follow him if he does step away?

Add in the fact that the Bruins are over the cap, into LTIR, and have a prospect pool that has been thinned significantly to acquire upgrades for their rapidly aging roster, and that sure smells like all-in to me.