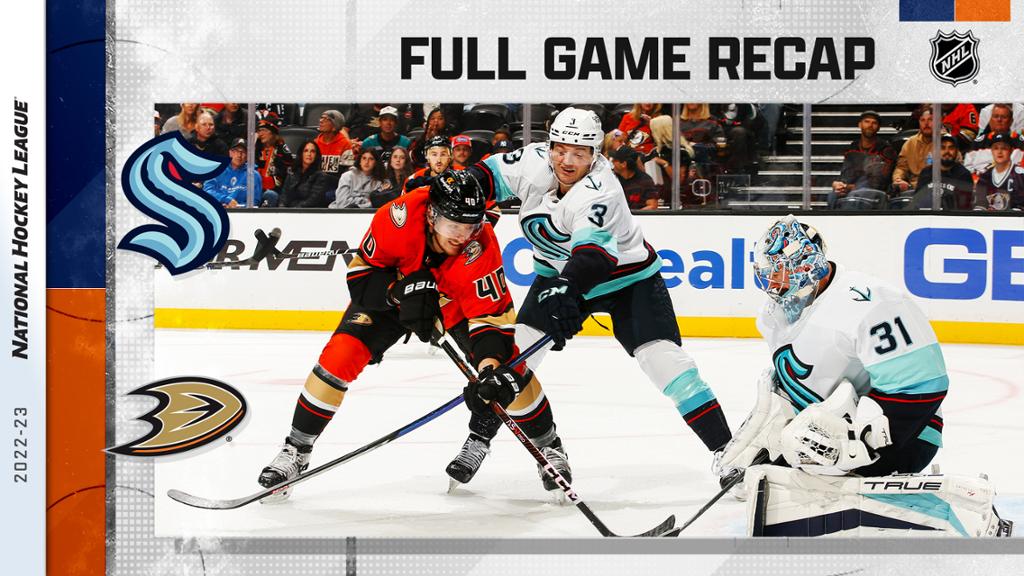 ANAHEIM — Troy Terry scored 55 seconds into overtime to give the Anaheim Ducks a 5-4 win against the Seattle Kraken in the season opener for each team at Honda Center on Wednesday.

Terry had two goals and an assist, Ryan Strome had a goal and two assists in his debut, and John Gibson made 44 saves and had the assist on the winning goal for the Ducks, who trailed 4-2 in the third period.

“[Gibson] makes a big save on a breakaway and then springs me up for a breakaway the other way,” Terry said. “The guy does it all. He’s our backbone. … Just to come back in front of these fans on opening night, it was infectious for us. You see the resiliency and how close this group is, and it’s something we can build on.”

Matty Beniers had a goal and an assist, Jared McCann, Andre Burakovsky and Oliver Bjorkstrand each scored a power-play goal, and Philipp Grubauer made 22 saves for Seattle, which went 3-for-5 with the man-advantage and play at the Los Angeles Kings on Thursday.

“We came away with a point, but we liked the position we were in, especially going up 4-2 with an opportunity to lock it down,” Seattle coach Dave Hakstol said. “There’s a couple things we have to do better there. Little things make a big difference.”

Trevor Zegras scored the second power-play goal of the game for the Ducks on a one-timer from the left face-off circle to tie it 4-4 at 13:23 of the third.

“I thought in the third period we kind of turned the tables,” Strome said. “We put pucks behind their [defense], we played in their zone more, and some guys made plays. When we kept the game simple for ourselves, it was almost a tale of two tapes.”

Video: [email protected]: Zegras unloads a one-timer for a PPG

The Kraken went on their fifth power play with 4:23 remaining and had opportunities to score, but Gibson made four saves and defenseman Nathan Beaulieu blocked a Jordan Eberle shot headed for an open net.

“It’s the fourth [power-play goal] that we wanted, we had the empty net,” Hakstol said. “We executed well and had a chance to get the game-winner there.”

Anaheim scored on its first shot of the game. Mason McTavish made a backhand centering pass to Terry in the slot, and he lifted the puck over Grubauer’s glove for a 1-0 lead at 51 seconds of the first period.

Seattle had a 5-on-3 power play for 37 seconds in the first, and McCann scored during the second penalty off a cross-ice pass from Beniers to tie it 1-1 at 10:13.

Video: [email protected]: McCann fires in PPG from the circle

After Anaheim defenseman Cam Fowler sent the puck over the glass for a delay of game penalty with 1:00 left in the first, Burakovsky scored 38 seconds into the second period to give the Kraken a 2-1 lead.

Anaheim went 2-for-3 with the man-advantage.

“Couple great plays by [McTavish],” Strome said. “When you play with guys that have that much skill and confidence, they’re going to be able to make those plays with time and space.”

Beniers put in a rebound off a blocked shot to extend Seattle’s lead to 4-2 at 4:09 of the third.

Frank Vatrano cut it to 4-3 with a wrist shot from the inside edge of the right circle at 9:56.

“That’s why we got him,” Terry said of Vatrano, who signed with the Ducks after splitting last season with the New York Rangers and Florida Panthers. “He can shoot a hockey puck.”