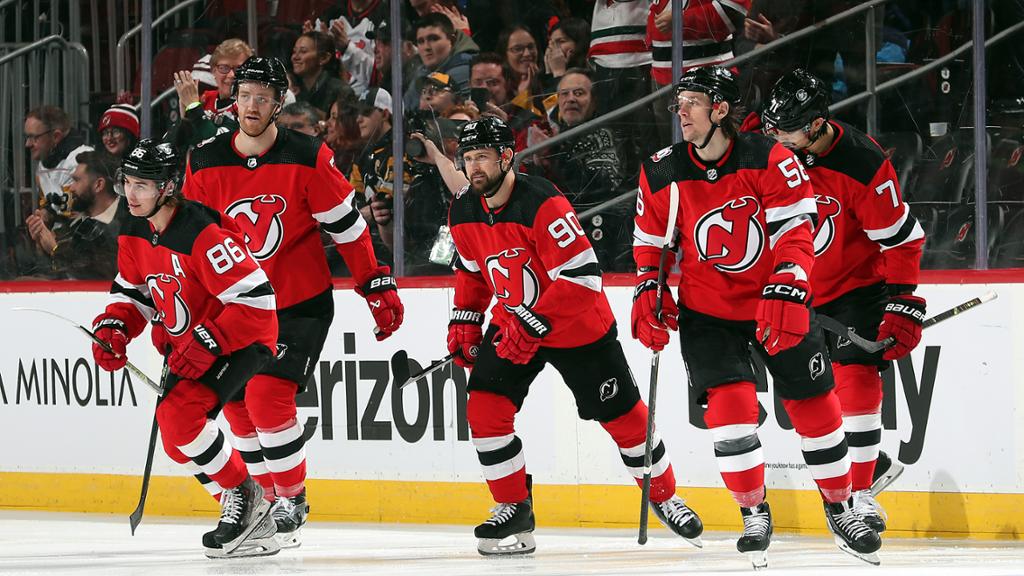 With the way they’ve been playing, the Devils could have easily had a few more players joining Hughes in South Florida next week (Feb. 3-4).

The New York Rangers moved up two spots to No. 8, the Colorado Avalanche jumped four to No. 10, and the Edmonton Oilers climbed three to No. 12. Each will have three players at All-Star Weekend, but all three teams could have had more if room were available.

That’s the theme this week in the Super 16, who else from the ranked teams could be going? There are plenty of candidates to choose from. And that’s what we did.

A select member of the voting panel offered his or her thoughts on who else from each ranked team could have or should have been selected to participate in All-Star Weekend.

As a reminder, to come up with the Super 16 each week, the 13 voters put together their own version of what they think the rankings should look like. A point total assigned to each with the team selected first is given 16 points, second 15, third 14, and so on down the line.

Here is the Super 16 and the All-Star snubs, if you will:

“There’s obviously only so much room on the roster, but Patrice Bergeron could have easily been selected to play in the NHL All-Star Game for the fourth time. Still unquestionably one of the best two-way centers in the League, the 37-year-old captain has 38 points (18 goals, 20 assists) in 47 games while winning 62.4 percent of face-offs. He’s averaging 1:49 of short-handed ice time per game and has 13 power-play points. Even in his 19th season, Bergeron remains one of the best players in the NHL.” — Brian Compton, managing editor

“In the Stanley Cup Playoffs last season there were questions in Raleigh, North Carolina, about the future of Martin Necas. Would the forward, who turned 24 on Jan. 15, be traded? Does he fit coach Rod Brind’Amour’s style? Necas has answered in a big way this season and he could have easily, maybe even should have easily, been selected to join teammate Andrei Svechnikov at All-Star Weekend. Necas is scoring nearly a point per game (0.89) and playing on the plus side most nights. He’s averaging 19:08 of ice time per game and added a dynamic element to a team that is already so good and truly a sum of its parts. There are no more questions. Necas isn’t an All-Star this season because there just isn’t enough room, but he is a future All-Star.” — Dan Rosen, senior writer

“I’ve got two from the Devils: defenseman Dougie Hamilton and goalie Vitek Vanecek. Hamilton’s 42 points (13 goals, 29 assists) are seventh in the NHL at the position, one behind Quinn Hughes of the Vancouver Canucks and Cale Makar of the Avalanche. He’s been a stabilizing force on a young team that’s finally soaring. And I’m not sure where the Devils would be without Vanecek, who is having a breakout season with a 2.30 goals-against average, .916 save percentage and two shutouts. He’s gotten lost in all the praise for a few other goalies — Linus Ullmark, Ilya Samsonov, Jake Oettinger — but Vanecek deserves a nod for what he’s done.” — Amalie Benjamin, staff writer

“Even though the Maple Leafs will be well-represented by forwards Mitchell Marner and Auston Matthews, William Nylander has every right to feel snubbed. Maybe he is not quite the household name like Marner and Matthews, but with 57 points in 49 games the Sweden-born forward is tied with Marner for the team lead, and his 26 goals lead the Maple Leafs. Ryan Nugent-Hopkins of the Oilers and Kyle Connor of the Winnipeg Jets are the only two players in the NHL with as many points who did not get invited to the festivities in South Florida.” — Paul Strizhevsky, staff writer

“Nikita Kucherov is fourth in the NHL with 68 points (19 goals, 49 assists), trailing only Oilers forwards Connor McDavid (89) and Leon Draisaitl (73), and Bruins forward David Pastrnak (69). Andrei Vasilevskiy is one of the best goalies in the world, so no argument here that he’s joining Kucherov for All-Star Weekend. But with captain Steven Stamkos having recently joined the 500-goal club in the NHL, he certainly would be deserving to be there too, and not just for sentimental reasons. Stamkos has 55 points (24 goals, 31 assists) and showing no signs of slowing down despite turning 33 on Feb. 7. Of note: defenseman Victor Hedman (31 points; two goals, 29 assists, plus-13) would be an excellent pick as well.” — Mike Zeisberger, staff writer

“There’s no question forward Jason Robertson deserves to be representing the Stars in his first NHL All-Star Game. But as a big fan of swift, two-way defensemen who can battle in the corners, trigger a smooth transition or quarterback a power play, I would have also enjoyed watching Miro Heiskanen work his magic for the Central Division. The 23-year-old has formed a great partnership with Ryan Suter in Dallas, which is first in the Central Division and No. 10 in my Super 16 this week. Heiskanen ranks in the top 10 among NHL defensemen in assists (32), points (39), power-play points (17) and average ice time (25:13). He’s already established NHL career highs in assists, points, and power-play points.” — Mike G. Morreale, staff writer

“Kyle Connor set NHL highs across the board last season in goals (47), assists (46) and points (93), and might be even better this season. His 57 points (24 goals, 33 assists) lead Winnipeg, and his eight game-winning goals are second in the NHL behind Draisaitl (nine). Connor is considered one of the top goal-scorers in the NHL, but it’s his all-around playmaking that has shined this season. It’s made the Jets a more dangerous offensive team and has them contending for first in the Central Division. Defenseman Josh Morrissey and goalie Connor Hellebuyck certainly earned their trips to Florida, but there’s no doubt Connor should be there with them.” — Adam Kimelman, deputy managing editor

“The Rangers have three players going to the All-Star game: goalie Igor Shesterkin, forward Artemi Panarin and defenseman Adam Fox. It’s hard to argue that there should be more players on the team there, though Mika Zibanejad is deserving because he’s first on the Rangers in goals (22) and second in points (49 behind Panarin’s 50). But for me, if they were to get another player to Florida, it should be defenseman K’Andre Miller. He has already established an NHL career-high 25 points, is closing in on his NHL best of seven goals and has shown huge strides offensively and defensively this season.” — David Satriano, staff writer

“It’s forward Andre Burakovsky. He was a great offseason signing for the Kraken for several reasons including a scoring touch and championship pedigree after winning the Stanley Cup with the Washington Capitals in 2017-18 and the Avalanche last season. He’s also been a great compliment as a frequent linemate for rookie center and All-Star Matty Beniers. Burakovsky could have easily been selected.” — Tracey Myers, staff writer

“The Avalanche already have Makar, and forwards Nathan MacKinnon and Mikko Rantanen, going to South Florida. They could have two more: forward Artturi Lehkonen and goalie Alexandar Georgiev. It seems Lehkonen is involved every time something positive happens for the Avalanche. He’s an ice-time grinder and point producer, averaging 21:43 per game and has 34 points (15 goals, 19 assists) in 43 games. He also has 17 points at even strength and 16 on the power play. Georgiev has proven himself to be a solid No. 1 after several seasons as a Rangers backup by going 19-11-3 with a 2.62 GAA, .918 save percentage and two shutouts. But the Central Division already has goalies Hellebuyck and Juuse Saros of the Nashville Predators, and three worthy Avalanche skaters, already going. There’s just no room for Colorado’s two other highly deserving candidates.” — Rosen

“Erik Karlsson of the San Jose Sharks is the lone defenseman on the Pacific Division roster and there are a few others who could have been selected, including Alex Pietrangelo of the Golden Knights. He has three previous All-Star Game appearances, including when Vegas hosted the festivities last season, and remains among the best at his position. Despite missing nine games while on leave because his 4-year-old daughter Evelyn was ill, the 33-year-old has 31 points (five goals, 26 assists) in 40 games. He leads Vegas in average ice time per game (24:38) and plays in all situations.” — Tom Gulitti, staff writer

“Nugent-Hopkins does so much for the Oilers and much of it flies under the radar nationally because of everything they get from McDavid and Draisaitl. But without Nugent-Hopkins, the Oilers wouldn’t be in a playoff position today. He creates and scores. He plays in all situations, including the penalty kill. He doesn’t get near the recognition of McDavid and Draisaitl, who are going to All-Star Weekend with Oilers goalie Stuart Skinner, but he deserves more than he gets. I’m not sure if Nugent-Hopkins should be classified as skilled or a grinder, because he is somewhere in between. What he could be classified as is an All Star, but the Oilers already have three players going, so he’s not.” — Rosen

“Pheonix Copley should be an All-Star. The goalie has been a savior for the Kings, winning the No. 1 job and excelling while veteran Jonathan Quick tries to find his game and presumptive No. 1 Cal Petersen in the American Hockey League since late November. Copley is one of the best stories in the NHL, coming out of nowhere to win 13 of his first 16 games (12-3-0). If that is not the credentials of an All-Star, put me on the line with Smash Mouth because they got the song all wrong.” — Shawn P. Roarke, senior director of editorial

“With due respect to Evgeni Malkin, always a deserving candidate for the Penguins, I have to go with Jake Guentzel as the player I would pick to join Sidney Crosby at All-Star Weekend. Guentzel has 44 points, three fewer than Malkin but in four fewer games than Malkin’s 47. He has 20 goals, three more than Malkin. He also plays 19:59 per game, roughly a minute and a half more than Malkin. Guentzel has 15 goals and 34 points at even strength; Malkin has 10 and 25. Malkin has excelled on the power play with 22 points; Guentzel has 10. But Guentzel has five game-winning goals to Malkin’s two. They both could go, and nobody would probably blink an eye, but if I had to pick one, it has to be Guentzel, Crosby’s linemate.” — Rosen

“Jared Spurgeon has been the Wild’s best player not named Kirill Kaprizov. Spurgeon is plus-18, best on the Wild by a large margin, while averaging 21:17 of ice time. The captain has 22 points (eight goals, 14 assists) in 46 games, including six goals since Dec. 18, tied for the most among NHL defensemen in that span with Hamilton, Roman Josi of the Predators and Makar. He has 105 blocked shots, tied with Pietrangelo for ninth this season.” — Nicholas J. Cotsonika, columnist

“Erik Gustafsson certainly deserved consideration. With 27 points (seven goals, 20 assists) in 49 games, the 30-year-old defenseman is having his best season in the NHL since he had 60 points (17 goals, 43 assists) for the Chicago Blackhawks in 2018-19. More impressive, Gustafsson is plus-11, first on the Capitals, and he’s scored two game-winning goals. He’ll need to continue to excel in the second half in the absence of an injured John Carlson.” — Robert Laflamme, LNH.com senior writer

HERE’S HOW WE RANKED ‘EM