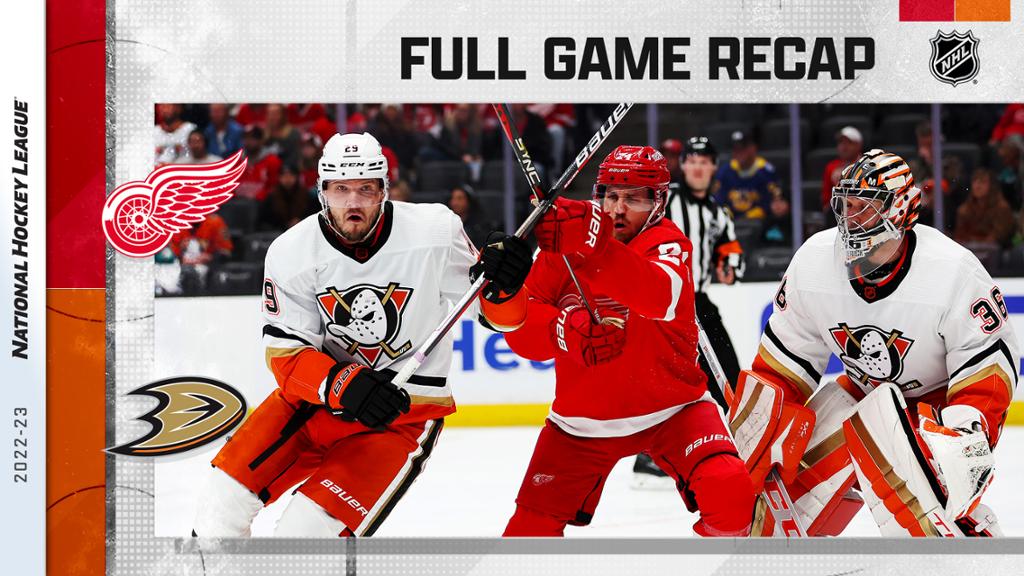 ANAHEIM — Ryan Strome scored with 50 seconds left in overtime to give the Anaheim Ducks a 3-2 win against the Detroit Red Wings at Honda Center on Tuesday.

Mason McTavish and John Klingberg scored, and John Gibson made 31 saves for the Ducks (5-10-1), who ended a three-game losing streak but remain the only NHL team without a win in regulation.

“We worked hard all night and I think we were the better team,” Strome said. “Obviously it’s been tough for us lately, but this one feels good and hopefully we can get on a roll.”

Jonatan Berggren scored his first NHL goal, Michael Rasmussen had a goal, and Ville Husso made 27 saves for the Red Wings (7-5-4), who have lost four in a row (0-2-2).

“We had a good flow to our game through two periods and, unfortunately, we didn’t manage our third very well,” Detroit coach Derek Lalonde said.

The Ducks forced a turnover by Tyler Bertuzzi in the Red Wings zone and Trevor Zegras passed to Strome for the tap-in. Bertuzzi missed the previous 13 games because of a broken hand.

“We had a really good start to our season and we’ve been competitive in this league because we take risk out of our game but, unfortunately, a couple times in the third and especially in overtime we got away from that,” Lalonde said.

Klingberg scored on a point shot through traffic to tie it 2-2 with 47 seconds left in regulation and Gibson pulled for the extra attacker. It was Klingberg’s first goal with the Ducks and the second of the season by an Anaheim defenseman.

“That’s how you score goals nowadays; it’s tough to make perfect plays,” Klingberg said. “That puck found its way all the way down there and it went in, so it’s always fun to score goals.”

Berggren gave Detroit a 1-0 lead at 7:12 of the first period on a power play when Filip Hronek‘s shot hit Anaheim defenseman Colton White in the head and the puck caromed to the side, allowing Berggren to score on the rebound.

“He’s been a great addition since he’s come up,” Red Wings forward Dylan Larkin said of Berggren, a second-round pick (No. 33) by Detroit in the 2018 NHL Draft.

Anaheim tied it 1-1 at 17:47 after McTavish scored a power-play goal following Adam Henrique‘s one-timer from the right circle that was saved by Husso.

Rasmussen put the Red Wings ahead 2-1 with 35 seconds left in the second, bringing the puck from behind the net into the left circle before spinning and shooting into the far side of the goal.

“We’ve got to look to create more 5-on-5 and put the puck in the net more,” Larkin said. “Tonight, I think it was a tale of John Gibson. He was good. We had a lot of looks, but we’ve got to be able to bear down.”

Video: [email protected]: Rasmussen snaps in a shot to take the lead

Anaheim had a 5-on-3 power play for 59 seconds in the third, but was unable to capitalize. McTavish hit the post on another power play with 7:18 remaining.

“We’re trying to get him as many reps as we can at center,” Eakins said of McTavish, the No. 3 pick in the 2021 NHL Draft. “We’ve got a pretty deep center right now, but he’s doing a great, great job there.”