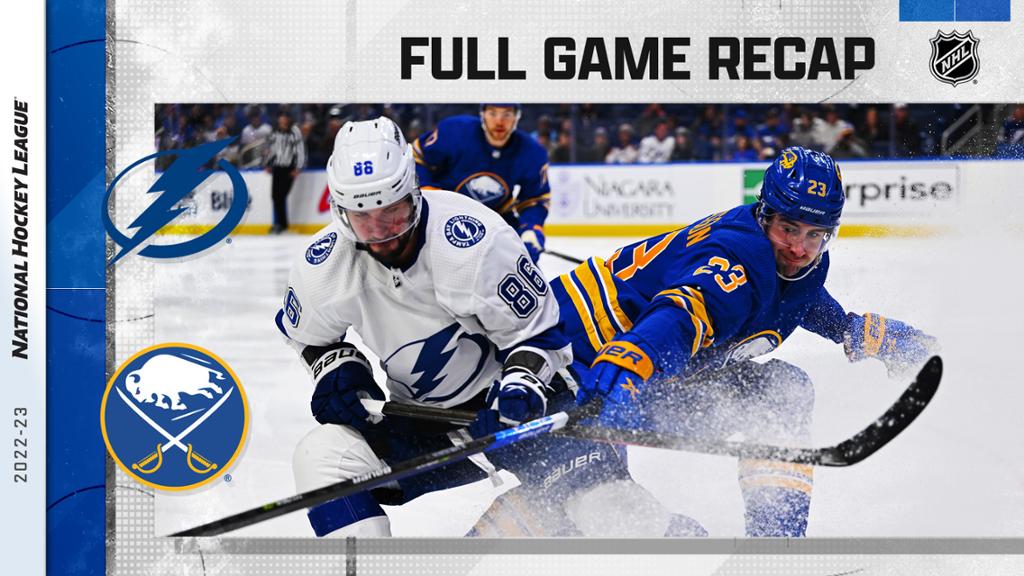 BUFFALO — Steven Stamkos scored at 2:44 of overtime and had three points to help the Tampa Bay Lightning rally for a 6-5 win against the Buffalo Sabres at KeyBank Center on Monday.

“There’s going to be games where we don’t deserve the two points and tonight was probably one of those, but we’ve been on the other side of that too,” said Stamkos, the Lightning captain. “It’s a long year, ebbs and flows, and it usually balances out. But we gave up too many prime scoring chances to some skilled guys and we don’t want to do that and leave our goaltender hanging, but still a character win nonetheless and we’ll certainly take that on the road and move on and try to be better.”

Brayden Point scored twice, and Nikita Kucherov and Mikhail Sergachev each had three assists for the Lightning (13-7-1), who have won six of their past seven and visit the Boston Bruins on Tuesday for the second of a three-game road trip. Brian Elliott made 32 saves.

“This learner is huge,” Buffalo coach Don Granato said. “It’s huge. So, you leave this game, that’s going to dominate everything else. And it was every single guy. It was all the way to the overtime goal. I do say all this, and our guys will learn from it. I know they will. I know they are [ticked] off at it. They’ve got to own it, and they will. I know we will. It happened, and you’ve got to make sure you gain the experience of it to the point where you don’t allow it to happen again.”

It was the second time in two games against the Lightning this season the Sabres led in the third period and lost (5-3 at Tampa Bay on Nov. 5).

“I think we played almost a full game, but we just kind of sat back at the end with that two-goal lead and let them push and take over,” Buffalo forward Dylan Cozens said. “Those are the times we need to just keep pushing for that next goal, don’t sit back, because that’s a good team and once they get the momentum going, they’ll take advantage, and that’s what they did tonight.”

Point scored on the power play to give the Lightning a 1-0 lead at 7:54 of the first period when he took a pass from Kucherov in the slot and held off Kyle Okposo before cutting to the net and sliding the puck past Luukkonen.

Corey Perry made it 2-0 at 16:48. He took a cross-ice pass at the bottom of the left face-off circle from Stamkos and lifted it over Luukkonen’s pad.

Tyson Jost scored his first goal with the Sabres to put them ahead 3-2 at 9:07 of the second period on a rebound below the left circle. The forward was claimed off waivers from the Minnesota Wild on Nov. 20.

Tampa Bay went 3-for-4 with the man-advantage.

“That was a big part of our game tonight, to get those power play chances and bury them,” Stamkos said. “Some games, the 5-on-5 play is not where it needs to be, and you need to rely on special teams. Sometimes it’s the PK, sometimes it’s the PP, and tonight was a combination of both, really.”

Cozens gave Buffalo a 4-3 lead when he took a no-look, behind-the-back pass from Rasmus Dahlin and scored top corner short side from the right circle at 9:37 of the third.

Jeff Skinner spun around and scored from below the right circle at 14:19 to make it 5-3.

“They’re a team that knows how to win,” Cozens said. “So, they’re confident that they can turn it on like that in the last few minutes and score at any time. That’s something we need to know, and we need to just keep pushing and not let them get those chances, because they obviously know how to win games.”

NOTES: The Lightning have scored 23 power-play goals, tied with the Colorado Avalanche for second in the NHL. The Boston Bruins have 24. … It was Kucherov’s 11th multipoint game of the season, one behind Dallas Stars forward Jason Robertson for the League lead. … Tampa Bay forward Cole Koepke was minus-1 in 8:52 of ice time after missing three games because of an upper-body injury. … Sabres defenseman Ilya Lyubushkin left the game with 1:10 remaining in the third period after blocking a shot from Stamkos. Granato did not have an update. … Buffalo forward Rasmus Asplund was minus-2 in 8:38 after missing two games with an upper-body injury.