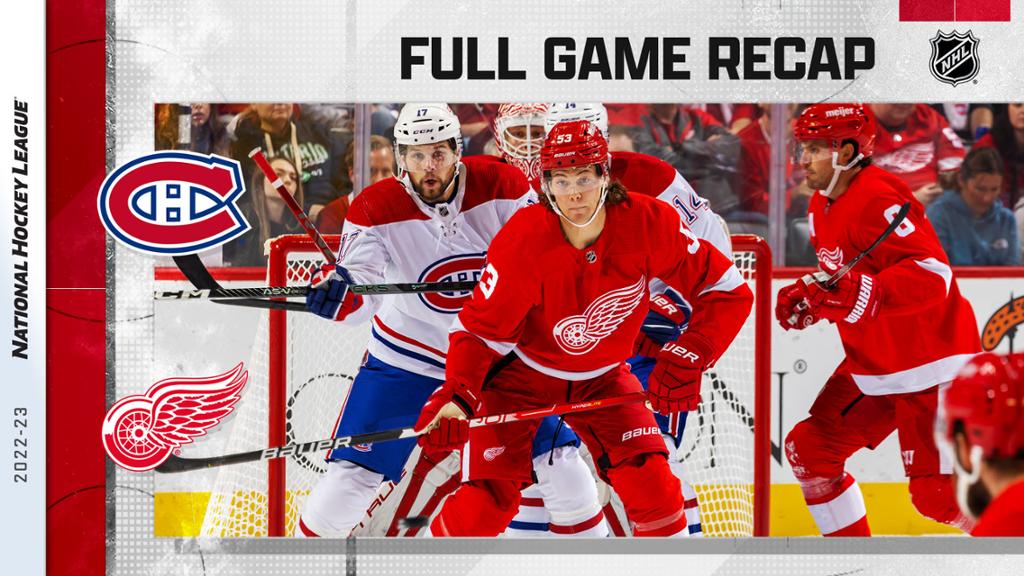 Ville Husso made 29 saves in his Detroit debut, and Derek Lalonde won his first game as an NHL coach.

“I felt like we were on top of them the whole way,” said Husso, who got his fourth shutout in 54 NHL starts. “It was one of those games you enjoy as a goalie. You trust the team is going to do a great job for you.”

Michael Rasmussen had a goal and two assists, and Oskar Sundqvist had two assists for the Red Wings.

“I just like the way we played,” Lalonde said. “I am a lot happier about the zero than I am about the three. There were times when it looked like it might get away from us, especially in the second period, but the guys hung in there.”

Jake Allen made 37 saves for the Canadiens, who were coming off a 4-3 season-opening win against the Toronto Maple Leafs on Wednesday.

“I think they brought a lot of pressure against us,” Montreal coach Martin St. Louis said. “They chipped a lot of pucks in and finished their checks. I think we’ll learn some things from this game and be better for it.”

Soderblom, who at 6-foot-8 is the tallest player in Red Wings history, jammed a rebound between Allen’s legs to give the Red Wings a 1-0 lead at 2:33 of the third period.

“It’s an unbelievable feeling,” Soderblom said. “Husso was a wall back there and Derek is a great head coach. This was a lot of fun.”

Rasmussen (6-6) and Sundqvist (6-3) each got an assist on the play; the members of the third line have an average height of 6-6.

“That line played pretty well,” Canadiens captain Nick Suzuki said. “All three of them are big boys who like to play down low and they gave us a bit of trouble.”

Rasmussen made it 2-0 by scoring into an empty net with 1:01 left, and Olli Maatta scored an empty-net goal with 48 seconds remaining in his Red Wings debut for the 3-0 final.

Allen’s 25 first-period saves matched his own mark for the most by a Canadiens goalie since 1997-98. He made 25 saves on 26 shots in the second period of a 4-0 loss to the Carolina Hurricanes on March 31.

“They had a lot of energy, obviously, with it being their home opener, and they really controlled the zone in the first period,” Allen said. “We were back on our heels a bit, to be sure, but you have to be able to weather those storms.”

Allen kept the game tied with 2:25 left in the second, reaching back to swat Andrew Copp‘s shot out of the air with the blade of his stick.

“That’s just luck,” Allen said. “I think the puck rolled on him a little bit and he hit my stick. Believe me, that’s not a save I have in my recipe book.”

Husso saved Josh Anderson‘s shot from the edge of the crease on a power play with 9:42 remaining in the third, then stopped Brendan Gallagher on a breakaway with 5:29 to go.

“For the most part, we made it comfortable for [Husso], but he stepped up with some big saves in the third period,” Lalonde said. “That’s the goal for us going forward.”

NOTES: Husso was acquired in a trade with the St. Louis Blues on July 8. … Maatta signed a one-year, $2.25 million contract with the Red Wings on July 14. … It was the Canadiens’ 300th game in Detroit, where they are 105-140-2 with 53 ties, but the first time the Red Wings hosted them in a season opener. … Montreal defenseman Kaiden Guhle left the game in the first period with an upper-body injury, but returned midway through the second and finished with one shot on goal and three blocked shots in 16:09 of ice time. … Each team plays the second of a back-to-back set Saturday. The Canadiens are at the Washington Capitals, and the Red Wings visit the New Jersey Devils.