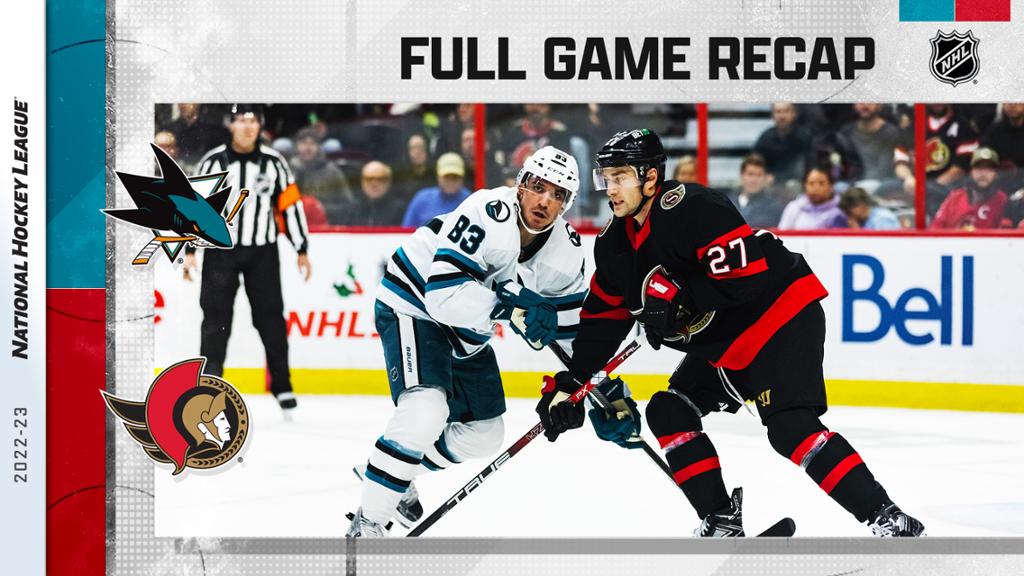 OTTAWA — Claude Giroux had two goals and an assist for the Ottawa Senators in a 5-2 win against the San Jose Sharks at Canadian Tire Centre on Saturday.

“We were playing good hockey for a while and we weren’t getting the results,” Giroux said. “And when you don’t get the results, you start doubting the way you’re playing. But we just have to trust that the way we’re playing is going to work. Tonight was a great example of just having to stick with it.”

Tim Stutzle had a goal and an assist, Drake Batherson had two assists, and Anton Forsberg made 35 saves for the Senators (10-13-1), who went 3-for-5 on the power play and are 4-1-0 in their past five games.

“Kudos to the fans and the crowd that gave us that energy,” Ottawa coach D.J. Smith said. “If it’s a dead crowd or maybe there’s not enough fans here tonight, maybe we don’t find that gear. I think the guys felt that right from the anthem on out.”

“We find ways to lose,” San Jose captain Logan Couture said. “I’ve said that many times this year. Until we fix that and find ways to start winning games, it’s not going to be going in the right direction.”

Hertl gave San Jose a 1-0 lead with a power-play goal at 7:26 of the first period. He shot into an open net from along the goal line after the puck bounced to him off the end boards following a blocker save by Forsberg.

Brady Tkachuk tied it 1-1 at 10:25, scoring on his own rebound at the edge of the crease during a power play.

“You can’t take that many penalties against that team,” Sharks coach David Quinn said. “Some sloppy stick penalties that we can’t have. It’s frustrating because I thought there were some things in our game that I liked. We had some good chances we didn’t capitalize on.

“It’s a different thing every night, it seems like. Cure one problem and another one pops up.”

Hertl put San Jose back in front 2-1 at 11:03 when he tapped in a centering pass from Erik Karlsson.

Giroux tied it 2-2 at 5:22 of the second period with a slap shot after Sharks defenseman Matt Benning blindly tried to clear the puck through the slot.

Stutzle then one-timed a quick cross-slot pass from Batherson into an open net on the power play to put the Senators ahead 3-2 at 16:40.

“We’re playing more like a team, for sure,” Forsberg said. “We’re battling hard, we’re battling for 60 minutes. I think that’s the biggest key. It’s a tight game out there and every team is good, so you’ve got to play 60 minutes every game.”

Thomas Chabot scored Ottawa’s third power-play goal at 5:18 of the third period, beating Kahkonen five-hole with a one-timer from the right circle to make it 4-2.

“I don’t know exactly what happened, but we killed ourselves in the second and third because we took way too many penalties, especially in the [offensive] zone,” Hertl said. “It just can’t happen.”

San Jose entered Saturday first in the NHL on the penalty kill at 91.6 percent (65-for-71) and had not given up more than one power-play goal in a game this season.

“Well, I didn’t win any face-offs,” Couture said. “So when you start without the puck, you give the other team a power play, that’s not a recipe for success. It starts there. And then some of their set [plays], we knew what they were going to do, and we just didn’t cover properly.”

“In between periods, I told [Shane] Pinto I was gonna score on a slap shot,” Giroux said. “So I didn’t really have a choice.”

NOTE: Chabot’s goal was his 200th NHL point (46 goals, 154 assists) in his 332nd game. Among defensemen in Senators history, only Karlsson (272) has reached the milestone in fewer games.