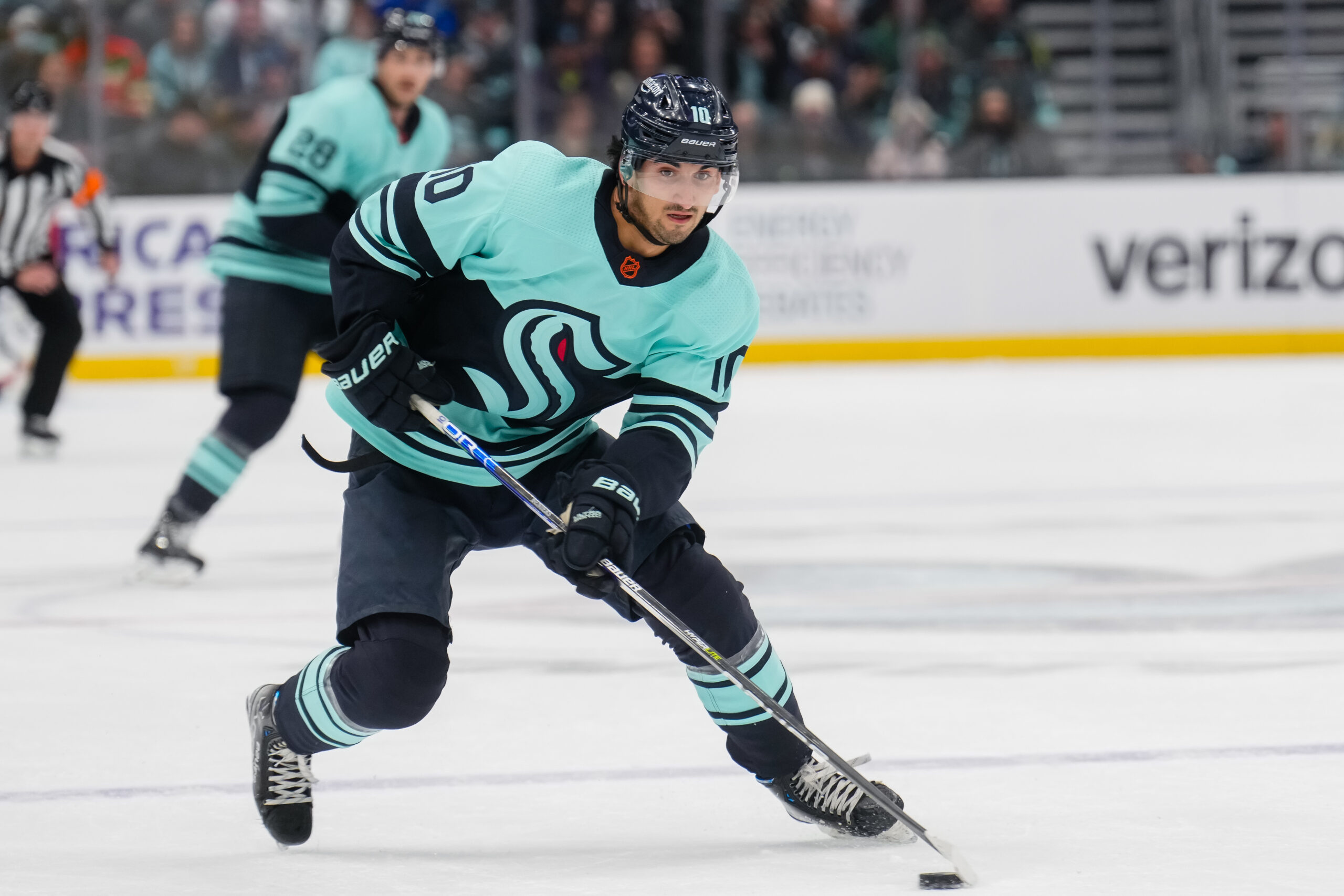 The Seattle Kraken have officially hit the halfway point of the 2022-23 season, and what a 41-game stretch it has been. The organization is currently on a seven-game winning streak, and their 54 points in 41 games is just six off their total from the 2021-22 season. From strong team performances to surprise individual efforts, Seattle’s second season in the NHL has fans in the Pacific Northwest dreaming of a potential Stanley Cup. With all this in mind, here are four Kraken midseason awards for the 2022-23 campaign.

Matty Beniers has been spectacular in his first full season with the Kraken and is the Calder Trophy favourite at the midway point of the season. He sits second on the team in goals with 16 and points with 34 while driving Seattle’s first line for the majority of the season. Whether it is generating offence or being defensively responsible, the 20-year-old is living up to the high expectations set upon him when he was drafted second overall in 2021.

Where Beniers has thrived this season is at even strength. He has recorded 27 of his 34 points at even strength, with 24 of those points coming during 5-on-5 play. His 27 even-strength points are tied with players like Brayden Point and Nathan MacKinnon, which shows just how good he has been at creating offence when not on the power play. He is not just the Kraken’s future but also their present as he looks to become just the third rookie in the past decade to eclipse 70 points in a season.

Every team needs a player like Yanni Gourde. A player that gives it his all every shift stands up for his teammates and is a leader on and off the ice. The two-time Stanley Cup Champion has been fantastic for the Kraken ever since he first stepped on the ice in Seattle and has become a fan favourite as a result.

Centring the Kraken’s third line, Gourde has been like a Swiss Army knife for the Kraken. He has contributed offensively with six goals and 27 points while also being strong defensively with 25 blocks and 34 takeaways during his 40 games this season. As mentioned, he is a leader on this team and has to be one of the favourites to wear the “C” once Seattle decides to name a captain.

While this award is close, Vince Dunn slightly beats out Adam Larsson for the team’s best defenceman. The 26-year-old defender has become that top-pair guy the Kraken had hoped for when they selected him during the Expansion Draft and finds himself tied for 11th among points among NHL defencemen with 30 in his first 41 games. He has improved his transition game and has raised his defensive game to the point where he can be relied upon to close out games and match-up against the opposition’s top players.

Dunn is having a career year and is a big reason behind the Kraken’s success this season. He sits second on the team behind Larsson in overall time on ice per game and has been the most used player on the power play this season. The most important part of his season, though, is that he has shown he can step up and be Seattle’s number-one defender this year and is ready for any challenges that lay ahead.

Daniel Sprong’s performance this season is not only the most surprising on the Kraken, but maybe across the entire league. After signing a professional tryout and having to earn his contract during the preseason, and being a healthy scratch multiple times early on, he currently sits third on the team with 13 goals and seventh in points with 26. Best of all, he is making the most of his opportunities as he currently sits seventh in the NHL in points per 60 minutes with 3.37.

Whether it is at even strength or on the power play, Sprong has found a way to contribute offensively. Playing on the team’s fourth line with Brandon Tanev and either Morgan Geekie or Ryan Donato, he is able to capitalize off easier matchups and understands the best way to generate offence is to get pucks on the net. He is a player that is easy to cheer for and has earned a contract extension based on his strong play so far this season.

Comeback Player of the First Half: Jordan Eberle

Despite putting up 44 points in 79 games for the Kraken last season, many viewed Jordan Eberle’s 2021-22 season as a bit disappointing. The expectations were extremely high, but thanks to constant injuries to his linemates and the overall construction of the team, he was unable to meet them. This season, however, he has had a strong bounce-back year and is on pace to have his best campaign since his 2011-12 season with the Edmonton Oilers.

Playing alongside Beniers and either Jared McCann or André Burakovsky, Eberle has 10 goals and 34 points through his first 41 games. He has also been strong defensively, registering 32 takeaways while only being on the ice for 26 goals against at even strength in 564 minutes of ice time. A member of the team’s leadership group, he is leading by example and has been a driving factor behind Seattle’s success this season.

Kraken Closing In On History

The Kraken’s strong play in the first half of the season has put them on the brink of making the playoffs for the first time in franchise history. While these five players have been exceptional this season, everyone on the team is playing well and made Seattle one of the most dangerous teams in the NHL. If they keep up the intensity and continue to play their game, they could be looking at a 100-point season and possibly the top seed in the Pacific Division.