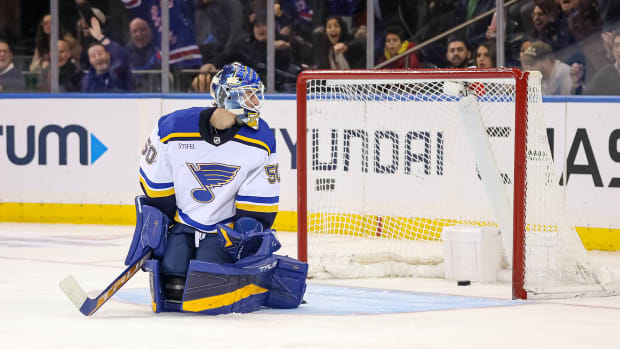 Welcome back to Screen Shots, a regular THN.com feature in which we analyze a few hockey topics in smaller portions. As always, we’ll get right to it:

The St. Louis Blues have hit the skids for the second time this season. They’re on a four-game losing streak, and they’ve dropped six of their past seven games. The pile of losses comes directly after a seven-game winning streak – and that comes after they lost eight games in a row. They’re the NHL’s streakiest team this season, and nobody can figure out why this veteran group is on such a roller-coaster ride thus far.

Certainly, the Blues have been hurt by the inconsistency of starting goaltender Jordan Binnington, whose individual numbers – including an .889 save percentage and 3.42 goals-against average – have been subpar. Binnington has also lost his past six games, and in that span, his SP has been no better than .882. But, as is true of all NHL goalies, the team in front of Binnington has to share in the blame.

To wit: the Blues’ offense has also sputtered and wheezed during this latest string of losses. In four of their past six defeats, they’ve scored two or fewer goals. It would be asking too much of Binnington and backup Thomas Greiss to win games for them with that small amount of offense.

The struggles of other Central Division teams have given the Blues a little bit of wiggle room to get back in the playoff picture, but if they can’t win consistently before the NHL’s March 3 trade deadline, it will be intriguing to see whether St. Louis GM Doug Armstrong starts peeling off the talent and reshapes the roster for a better chance to win next year. Right now, the best they can do is mediocrity, and that won’t put them in a post-season slot by the time mid-April rolls around.

Speaking of Central Division teams, the defending Stanley Cup-champion Colorado Avalanche suffered a major blow Monday night when superstar center Nathan MacKinnon was injured in the first period of the Avs’ game against Philadelphia. MacKinnon’s injury compounds the stress the Avalanche have been under, with star forwards Gabriel Landeskog and Valeri Nichushkin, as well as forwards Artturi Lehkonen, Jean-Luc Foudy, Darren Helm, Evan Rodrigues and Shane Bowers, and even blueliners Josh Manson, Bowen Byram and Kurtis MacDermid all sidelined with health problems.

That said, if there is a silver lining to the black cloud the Avs are under, it’s that they’re they’ll have significant salary cap space by the trade deadline – more than $6 million in space, as per Cap Friendly. You know Colorado president Joe Sakic and GM Chris MacFarland will be using virtually every penny of space to add depth in anticipation of another deep playoff run. And if they can get back most of their currently-injured players in the coming weeks and months, it will be as if they’re getting assets in a trade.

In a way, it’s impressive that the Avs have been able to stay in the thick of the playoff picture in the Central. They’re fourth in the division with a 13-9-1 mark, but as players return to the lineup, more will be expected from them.

Taking a stand on public issues, and the blowback that can come with an outspoken approach, is something this writer is very familiar with. We’re nowhere close to perfect, and we’ve made mistakes on social media over the years.

We’ve also seen public figures make notable errors, and they’re inevitably confronted with the consequences of those errors. That’s as it ought to be. Freedom of expression does not equal the absence of consequence, even if the educational system has let people down and caused them to make statements they soon regret.

This is true of professional athletes as well. In many ways, our expectations of them are limited only to their on-field performance. We don’t ask nearly enough of them to be fully informed on hot-button issues. If they play well, that’s good enough for many of us.

Unfortunately, this approach can lead to controversies like the one Montreal Canadiens star goalie Carey Price found himself embroiled in this past weekend. Price went to social media to make clear he was opposed to the Canadian federal government’s proposed legislation banning assault-style firearms.

If he’d left it at that, Price likely would’ve escaped criticism, but he also linked to a firearm-advocacy group, the Canadian Coalition for Firearm Rights, who posted the term “POLY” to use as a discount code for its online store.

This tone-deaf code was used as the anniversary of the “Montreal Massacre”, an incident on Dec. 6, 1989 at the Ecole Polytechnique when a gunman shot 14 women to death simply for their gender. The pain of the mass murder still resonates to this day, which is why people weren’t pleased with Price’s association with the code.

We’re not here to drag Price as a person. We all make mistakes, and Price said on Tuesday he apologizes to those who are impacted by it and may have been upset by a conversation about guns during the week of the anniversary. The group that owns the Montreal Canadiens originally said on Monday that Price wasn’t aware of the massacre, but Price said he was aware on Tuesday.

All NHL teams undergo social media training, but this latest incident means that maybe there should be more extensive training that includes historical education and overall sensitivity to important events. Otherwise, there are going to be additional problems like this one down the road. It’s important for the sport to be proactive and not reactive, and Price’s error in judgment makes that clear.