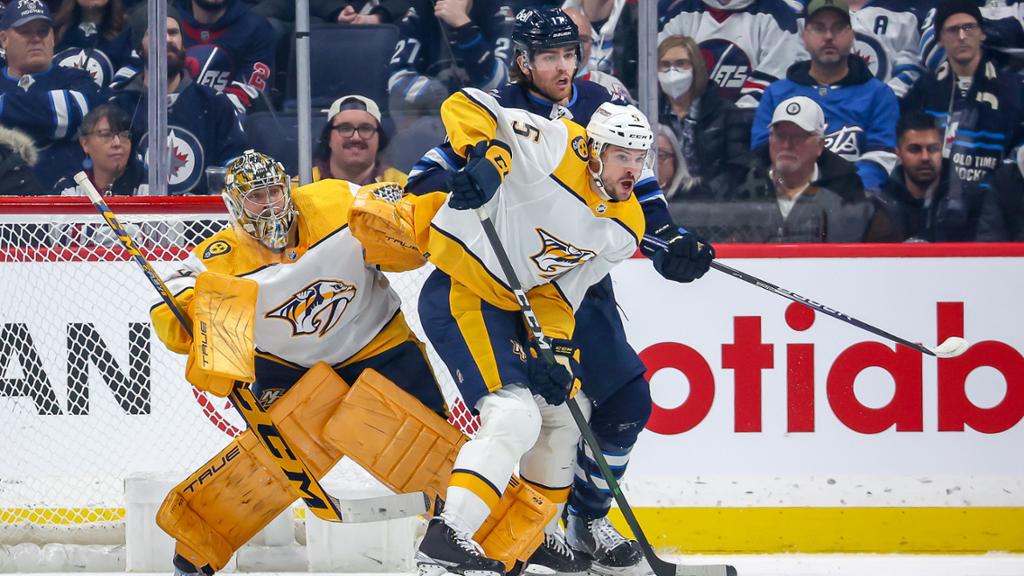 The Nashville Predators played a 1-1 game through two periods, but Kyle Connor scored from the slot at 3:31 of overtime to help the Winnipeg Jets sneak out a 2-1 win Thursday at Canada Life Centre.

Filip Forsberg opened the scoring in the first period but was answered by a Dylan DeMelo goal that kept the score knotted at one apiece through the second and third frames.

The Predators earned a point in the OT loss and are now 0-3-2 in their last five games.

Matt Duchene set up a one-timer for Forsberg from the circle to give the Predators a 1-0 lead in the first period on Nashville’s first shot of the game. With the goal, Forsberg extended his team lead in points to 25 (9g-16a); he now has 22 points (7g-15a) in his last 21 games dating back to Oct. 22 vs. Philadelphia.

Thursday’s game marked Winnipeg native Cody Glass‘ first time playing an NHL game in his hometown. Although his NHL career has spanned parts of four seasons, injuries and the Covid-19 pandemic had kept Glass from making his NHL debut at Canada Life Centre until now.

“It’s unbelievable,” Glass said following Thursday’s morning skate. “Just being in Winnipeg and being able to play in front of not only my family but also my friends who haven’t seen me play in a very long time really means a lot.”

Juuse Saros made 39 saves on 41 shots, holding the Jets scoreless through two periods to send the game to overtime. His 39 saves were tied for second most in a game this season.

Tweet from @PredsOnBally: Just as one 🧃 save is posted, he comes up big again 🤩🤩 pic.twitter.com/jll9npZacm

I think there were some good things we did. But obviously, I think we had to defend a little bit too much. We played against a good team. I felt like there was some more offensive stuff going on off the rush. We got one point out of this and we would have liked to get two but we’ve got to take the one point and move on.

I thought the first period was good. I thought we dictated the game in the first. After that a lot of penalties in the second kind of took the momentum away from us… Then in the third it was a little bit of a back and forth. We had a couple of chances but we ended up playing too much defense. Overall, one point was probably mostly because of Juice – he played great.

Especially in the second period, they had three power plays. He was making great saves and obviously had a couple of huge saves in the third period and even in overtime before it went in. He’s our best player night in and night out and we’ve got to help him a little bit better.

The Preds head to Denver to face another Central Division rival, the Colorado Avalanche, for the second time this season. Puck drops Saturday at 8 p.m. CT, and the game will be broadcast on Bally Sports South, 102.5 The Game and El Jefe Radio.