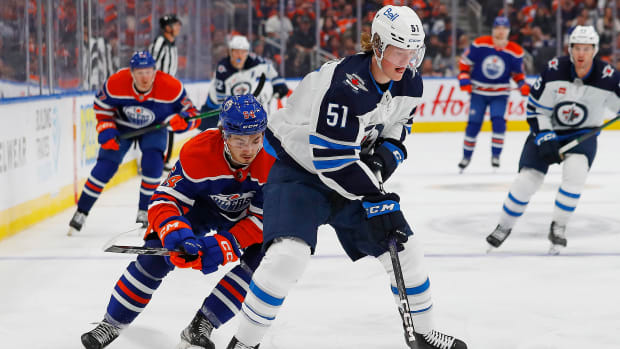 Though it was a surprise to see the Winnipeg Jets’ 18th-overall pick from the 2021 draft leave the University of Minnesota after just one season, the supremely skilled center hasn’t looked out of place early on at the AHL level.

Last April, he signed his entry-level contract with the Jets five days before his 19th birthday, changing course from a path that had been laid out since age 14 when he and his one-year-younger brother Cruz both committed to the Golden Gophers.

“I talked it through it with my family, and we decided that it’d be the best decision going forward,” he said last month while skating for the Jets at the Young Stars Classic in Penticton. “Ultimately, that’s the decision I made.”

In his single NCAA season, Lucius put up nine goals and 19 points in 24 games, skating on the right wing with now-senior Ben Meyers in the middle and fellow freshman Matthew Knies on the left side. The line was productive, but an ankle injury that eventually required surgery ended Lucius’ year early and prevented him from participating in the Frozen Four, where the Gophers reached the semifinal.

After the tournament ended, Lucius watched with interest as NHL teams lined up to pitch Meyers, one of the top college free agents of his class. He signed a two-year pact with the Colorado Avalanche on April 13.

Lucius said watching his linemate go through that courtship ritual whetted his own appetite to sign a pro contract. In the end, though, his decision was “just talking to my family and the Jets, trying to make a decision for myself. And I felt like I did that.”

That decision carried a significant amount of risk. In addition to foregoing three years of college eligibility, there was no guarantee where Lucius would play this season. It’s a tall order to jump straight into the NHL after a single college season — especially one that ends with an injury. And while both Lucius and 2022 Winnipeg first-rounder Brad Lambert are AHL-eligible because they weren’t drafted out of the CHL, hockey’s top minor circuit doesn’t exactly cater to teenagers who are taking their first steps into the North American professional game.

For now, both have been assigned to the Moose. And Lucius is happy to be back in the middle of the ice, skating between two savvy AHL veterans in Mikey Eyssimont and Alex Limoges.

“Last year, at the University of Minnesota, I didn’t play center at all,” Lucius said after Saturday’s game. “To get a different opportunity here and play center again is really special. I’m trying to make the most of it.”

Moose coach Mark Morrison liked what he saw in Game 1.

“Lucius was on the puck and I thought he did a great job,” Morrison said. “He’s playing with a couple of pretty good players there, that that help him out. So yeah, I liked his game.

“We’ll go over some things that he can do better. But first game — good job.”

Lucius is pleased with his fit with the Moose so far.

“I feel like the coaching staff here really believes in me, and the team as well,” he said.

And even at this early stage, he feels like he has the green light to dip into his bag of tricks and display a little razzle-dazzle.

“Maybe, (I have) a little freedom just to play my game but still play both sides of the puck really well.”

If Lucius or Lambert play well with the Moose, there’s a chance that they can earn an NHL call-up sometime this season. Both players also remain eligible for major junior. Their WHL rights are held by the Portland Winterhawks and the Seattle Thunderbirds, respectively.

By his estimate, three-quarters of Lucius’s teammates from the USA Hockey National Team Development Program are still in college this year. So one opportunity that is on his radar is the possibility of re-joining many of them on Team USA at the 2023 World Junior Championship.

His experience at the 2022 winter tournament was cut short when it shuttered due to COVID-19 concerns, and he took a pass on the summer event while rehabbing and getting ready for Winnipeg’s training camp.

“If I have the opportunity to play at world juniors this winter, I’ll take it for sure if the Jets let me,” he nodded. “Yeah, that’d be something I’d do for sure.”

Knowing his path could follow any number of forks this season, Lucius is aiming to keep his focus on what he can control.

“I’d say the biggest thing is just take it one day, one game at a time and see what happens,” he said. “Compete-wise, just giving 100 percent every game.”

Lucius will get a true AHL experience this weekend. The Moose hit the road for three games in three days, visiting the Chicago Wolves on Friday, the Milwaukee Admirals on Saturday and the Rockford IceHogs on Sunday.