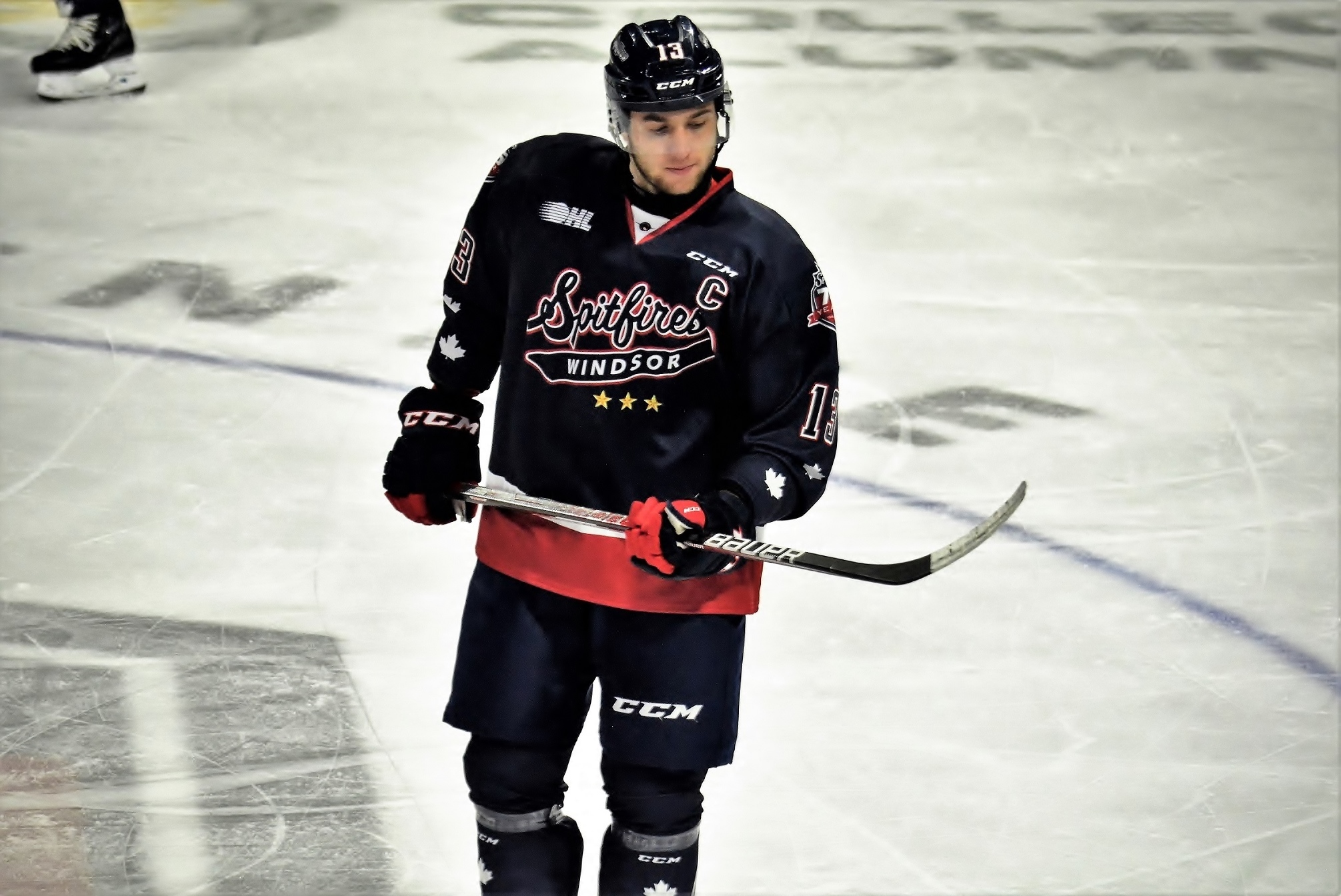 In the Ontario Hockey League (OHL), taking risks is a part of any general managers’ job. Former Windsor Spitfires’ GM Warren Rychel was famous for home run swings in trades. Sometimes, he spun himself into the ground but, at other times, the ball landed miles away. That was the case with his trade for young forward Will Cuylle in the summer of 2018.

With the OHL trade deadline coming up on Tuesday, Jan. 10, we’re going to take a look at a handful of deals (deadline and non) from the past several seasons to see how they played out for both clubs. When Rychel bought the Spitfires in 2005, along with Bob Boughner and Pete Dobrich, he took over the GM role and soon became known for his big, bold moves that sent shockwaves through the league. On several occasions, he sent multiple picks out in return for a just-drafted prospect that wouldn’t report to another team. It’s called the “Defected Rule,” where a player can be dealt for picks when they don’t report to their first training camp. In most cases, it’s a high-end draft pick and this is what happened with Cuylle. He was drafted third overall by the Peterborough Petes in 2018 but didn’t report. Instead, the teams made a deal that’s still being felt to this day.

Coming into 2018-19, Rychel already signed his first-round pick (10th overall), forward Jean-Luc Foudy. However, he wanted to build a club that would dominate in a few seasons and he was never afraid of acquiring a defected player. Over his career, he brought in players like defencemen Adam Batemen and Nick Ebert, along with forward Logan Brown. While success had been hit-and-miss, he was confident that getting Cuylle would pay off in the long run. The clubs talked and here’s how the deal went down:

The conditional pick would be changed if the Spitfires could acquire another second-round pick in 2020 or 2021, which would then be sent to the Petes.

What the Spitfires Got

Entering the 2018 OHL Draft, Cuylle was a 6-foot-2, 193-pound winger out of the Toronto Marlboros known for his pro shot, physical game, and potential leadership ability. In 45 games in 2017-18, he had 33 goals and 62 points. Everything was there for him to be successful at the next level.

His start was promising with 26 goals and 41 points in 63 games in 2018-19 while showing his physical play. However, in his sophomore season, everything levelled off with just 22 goals and 42 points in 62 games. Something felt off and that “wow” factor struggled to get going.

The OHL stopped their season in March 2020 due to COVID-19 and that may have been the best thing for Cuylle. During the stoppage, the New York Rangers saw his potential and took him in the second round in 2020. He spent 2020-21 with their American Hockey League (AHL) club, the Hartford Wolfpack, scoring five points in 18 games. Something happened there, though, that seemed to light a fire.

When the OHL returned in Sept. 2021, Cuylle arrived at the Spitfires’ camp with something to prove. He added size (now 6-foot-4, 215-pounds), dominated the ice, and was a leader in the room. The club made him captain and he promptly shattered his goal totals (26 to 43), his point totals (32 to 80), and made Team Canada for the 2022 World Juniors. During the club’s run to the OHL Championship, Cuylle became their glue. He knew what needed to be done and was in permanent game mode.

It took a while for him to develop, but the end was exactly what Rychel had envisioned when he made the trade. Deals like this can be hard to project but it worked out beautifully for the Spitfires.

What the Petes Got

When you have a big trade like this, the picks can be tossed around the league just as easily as they’re kept. The full return is often not realized for several seasons down the road, which is what happened here. As is the case with all “defected player” trades, the Petes only received draft picks in return. However, they got their money’s worth.

With the Frontenacs’ second-rounder in 2019, the Petes took 6-foot-2, 193-pound defenceman Artem Guryev out of the Toronto Marlboros Under 16 AAA. Now 6-foot-4, 220 pounds, he’s an imposing figure and has become known for a physical style, while chipping in with some offence. The San Jose Sharks took notice and selected him in the fifth round in 2019.

This season he had an assist and 37 penalty minutes in nine games for the Petes before being traded to the Flint Firebirds on Nov. 12. The deal saw Guryev and three picks dealt in exchange for star winger Brennan Othmann (New York Rangers). It’s a big boost to the Petes’ lineup as they aim for an OHL championship this season.

This pick went to the Niagara IceDogs in a 2019 package deal for 20-year-old defenceman Jacob Paquette. He had 19 points in 59 games with the Petes before moving on to Queen’s University.

The Petes took goaltender Liam Sztuska 94th overall. He saw action in four games with the club in 2021-22 but has become a bigger part of the club this season, backing up veteran Michael Simpson.

Sometimes a pick can help a team in multiple ways. The Petes traded the Spitfires’ third-round pick in 2021 to the Guelph Storm on Dec. 14, 2018, in a package deal for San Jose Sharks’ prospect defenceman Ryan Merkley. He played the rest of the season with the club, scoring 32 points in 35 games. However, his time with them was short-lived.

In May 2020, he was traded to the London Knights in return for the IceDogs’ third-round pick in 2022 and either a conditional second in 2024 or an Erie Otters’ conditional third in 2024. The Petes then used the third in 2022, plus more, to acquire star forward Akil Thomas at the 2020-21 trade deadline in hopes of a playoff run. Unfortunately, the league COVID-19 shutdown hit at the end of the regular season and we couldn’t see this club’s potential play out. Thomas moved on to the Los Angeles Kings’ system that summer.

The conditions on the other two picks weren’t disclosed. However, the Petes may have received the second-round pick because they acquired the third-rounder, again conditional, from the Otters just before the 2022 OHL Draft.

The Spitfires got this pick from the Barrie Colts, along with other picks and 6-foot-9, 235-pound young forward Curtis Douglas, in exchange for then-captain Aaron Luchuk. The pick didn’t stay with the Petes, either. Just before the 2022 OHL Draft, they sent it to the Flint Firebirds in exchange for the Firebirds’ third-round pick in 2023 and the Hamilton Bulldogs’ second-round pick in 2024.

This is another piece to the Petes’ puzzle that we’ll discover more about next spring.

The Petes then traded the pick to the IceDogs as part of the Paquette deal. Strangely, the IceDogs used it to select goaltender Joseph Costanza, who was then traded to the Spitfires prior to this season. It’s the circle of hockey.

Compensatory Picks from the OHL

The Petes also received two compensatory picks from the OHL — the fifth-overall pick in 2019 and the final pick of the second round in 2019.

The first in 2019 was used to select stud forward Mason McTavish. In his rookie season, he became one of the best pure snipers in the league with 29 goals in 57 games. Unfortunately, when the COVID-19 stoppage happened, he ended up going overseas to EHC Olten in the top Swiss pro league for 2020-21. After that, he was drafted third overall by the Anaheim Ducks in 2021 and split time between them and the San Diego Gulls (American Hockey League) in 2021-22 before rejoining the Petes for five games. That’s when they traded him to the Bulldogs.

While that deal helped the Bulldogs win the OHL Championship, the Petes got forwards Jonathan Melee and Alex Pharand, two second-round picks, three third-round picks, and a conditional fourth-round pick. That became another situation for the club.

Pharand and three of the picks, along with two other picks, were later traded to the Sudbury Wolves at the deadline for 18-year-old forward Chase Stillman. The Petes also traded one of the seconds to the Otters for picks in 2023 and 2024. However, they did keep Melee, the Sarnia Sting’s third-round pick in 2023, and the Bulldogs’ fourth-round pick in 2025… so far. Needless to say, this part of the equation won’t be settled for quite some time.

The pick at the end of the second round was included in the Merkley trade with the Storm.

Trades like this can be bittersweet for both clubs. The Petes not only gave up a young player with oodles of potential but they also took the chance that the picks would pan out. The Spitfires took the gamble that Cuylle would find his potential while hoping that they could re-stock the draft cupboard. Rychel was used to pulling off moves like this, but that doesn’t make it any less nerve-wracking.

In the end, the Spitfires got exactly what they needed; a power forward who could produce, play physical, and lead the club. It took longer than they expected but the run to the OHL Championship with Cuylle as their captain is about as ideal as it gets (aside from winning it all).

On the other hand, the Petes are still waiting for their big break. McTavish was a beast but they couldn’t do anything with him. Fortunately, they still have Sztuska (and the future picks) as a possible long-term piece and were able to find ways to get Othmann and Stillman, who could help them make a push this season.

If the Petes had made it to the OHL Championship by now, you could argue this was a win-win. Unfortunately, it wasn’t the case. While they have a good shot at making noise this season, the Spitfires currently win this trade because of their run in 2021-22. The Western Conference title beats potential every time.

A nearly life-long resident of Windsor, ON, I graduated from St. Clair College (Journalism) and University of Windsor (Communications) and have attended Windsor Spitfires’ (and OHL) games for 30-years. My areas include multimedia journalism and photography.