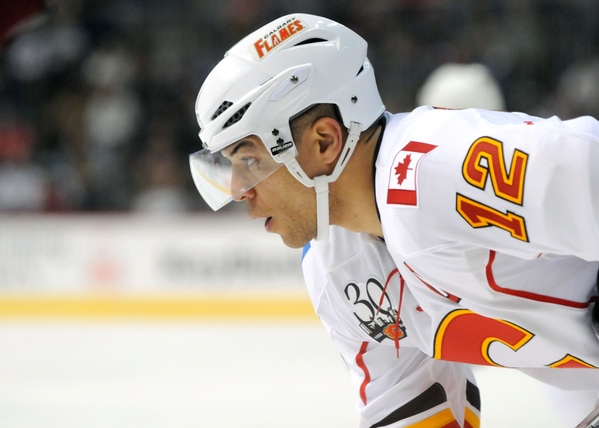 The Calgary Flames participated in another edition of Hockey Day in Canada on Saturday afternoon. Although the city of Calgary has never hosted the annual event, the NHL team has always had a marquee matchup on the day.

Usually, the Flames take on a regional rival like the Vancouver Canucks or Edmonton Oilers; however, this year, they drew the short straw and are the only Canadian team facing off against an American squad.

Their opponent is the Tampa Bay Lightning, who are at the end of their western Canada road trip. Furthermore, the trip has been pretty special since captain Steven Stamkos scored his 500th career goal on Wednesday night. Currently, the Lightning are one of the top teams in the Eastern Conference and should be in contention to defend their Eastern Conference championship for the fourth straight season.

Meanwhile, the Flames are watching games and points slip away, and if they don’t find a winning formula soon, they could eventually miss the playoffs this year. Historically, they have a winning record on Hockey Day in Canada, 10-5-5-1, so playing in a marquee matchup on this special day could serve as the spark they need to get their act together.

Let’s take a look back at the ups and downs of the Flames’ performances on this day.

Before the Winnipeg Jets came back home in 2011, only six Canadian teams existed, providing fans with epic head-to-head matchups on a day to celebrate the hockey community across the country. In their first game back on Feb. 19, 2000, the Flames took on their provincial rivals, the Oilers, and walked away with a 3-2 overtime win. Additionally, Marc Savard had two goals in the game, including the winner, while Fred Brathwaite earned the win for Calgary.

After starting this new yearly tradition on a high note, the Flames would drop both contests during the next two seasons to begin a five-game winless streak. Sadly, in 2001 they lost to the Oilers in a 3-1 rematch before dropping a 4-2 contest to the Montreal Canadiens in 2002. However, in the following season (2003), the Flames tied the Canucks in their first meeting, 2-2, with Jarome Iginla collecting points in all three games. Furthermore, this contest remains the only tie for the Flames on Hockey Day since the league eliminated the category after the 2005 lockout.

In the season before the lockout, 2004, the Flames lost 2-1 to the Ottawa Senators in their only encounter during Hockey Day, which extended the team’s losing streak to four games. Moreover, when hockey returned, the Flames took on the Canucks in the 2006 game but lost 4-3 in overtime to extend the losing streak even further. However, despite the loss, Iginla scored again, while Brendan Morrison potted the overtime winner to give the Canucks their first win over the Flames on Hockey Day.

Even though the Flames found themselves in a rut on Hockey Day, they closed out the decade by sweeping the Oilers over the final four years. Thanks to brilliant performances from Miikka Kirprusoff, they emerged victorious 3-1 in 2007 and 4-1 in 2008, while Iginla continued to add to his totals on Hockey Day, with points in each game.

Although Iginla and the Flames were finding success on Hockey Day, the hero of the 2009 game was Todd Bertuzzi, who scored the only goal in the shootout to secure a 3-2 win over the Oilers to extend the win streak to three games. Moreover, the Flames wrapped up the decade with their biggest win on Hockey Day, a 6-1 defeat of the Oilers in 2010, a game where Iginla scored a hat trick.

Hockey Day is a special day for Canadians. Over the years, the NHL has accommodated the schedule to feature provincial rivals going head-to-head to build anticipation for these contests. Unfortunately, Vancouver, Winnipeg, and Montreal are the only teams in their respective provinces, leaving an odd number of teams for inter-provincial rivalries.

Interestingly, the Flames have not played the Oilers on Hockey Day since 2010, a streak that has reached 12 years and counting. Instead of the Battle of Alberta, the team built up a rivalry with the Canucks as their annual opponents on Hockey Day, playing them in ten out of the last eleven seasons. Despite the repetitiveness, the Flames produced a 5-2-3 record over that time.

After securing the franchise’s first four-game win streak on Hockey Day, the Flames stumbled against the Canucks (again), dropping their 2011 contest by a score of 4-2, despite Iginla collecting more points in the defeat. However, the Canucks dominance was short-lived since the Flames emerged with their first Hockey Day win over their rivals, 3-2 in a shootout when Iginla scored in the third round.

Despite the captain’s best efforts, the Flames would drop the next two games against the Canucks (both in Vancouver) during the 2013 and 2014 seasons. Sadly, Iginla didn’t register any points during his last Hockey Day (2013) as a member of the Flames, which wound up being a 5-1 blowout loss. However, despite their most recent failures, the team rebounded in 2014, only losing 3-2 in the shootout when Chris Higgins scored in the fifth round.

After returning to the Saddledome for the 2015 Hockey Day game, the Flames edged out the Canucks 3-2 thanks to Sean Monahan scoring two goals and Lance Bouma getting the game-winning goal. Furthermore, their momentum carried over into 2016, where the team picked up their second consecutive win, a 4-1 triumph, thanks to Mikael Backlund‘s three points to pace the Flames’ attack.

However, as they often say, all good things must come to an end, and the team’s mini two-game win streak on Hockey Day did just that in 2017 with a 2-1 overtime loss when current Flames’ alternate captain Chris Tanev collected the winner for the Canucks. Unfortunately, this particular loss kickstarted another lengthy losing streak (three games), bringing the decade to a close.

After playing the Canucks in seven straight seasons, the rivalry took a season off in 2018 when the Flames battled the Winnipeg Jets on Hockey Day. Unlike the previous year, the team lost this contest 2-1 in a shootout when Bryan Little and Blake Wheeler were successful during their breakaway attempts. Despite playing a new opponent for the first time in 13 years, the Flames still had no answers on how to get out of their Hockey Day slump.

Meanwhile, after being apart for one season, the Flames and Canucks renewed acquaintances in 2019. Unfortunately, they had no answer for Elias Pettersson, who set up two goals during regulation and was the only player to score in the shootout for another 4-3 extra time loss. However, the Flames flipped the script in their Hockey Day rivalry with the Canucks, winning the last two meetings in 2020 and 2022. Indeed, the Flames had some unlikely heroes like Dillion Dube (three points) and Derek Ryan (goal, assist), who destroyed the Canucks 6-2 in 2020 before Johnny Gaudreau scored the only goal of the game in 2022, resulting in a surprise 1-0 win. Historically, the team’s only shutout on Hockey Day occurred last season, a feat achieved by Jacob Markstrom.

Recently, the Flames have won their last two Hockey Day games; however, they are 5-5 in their previous ten. Overall, they are 10-5-5-1 on this day, scoring 55 goals and surrendering 49.

A Deeper Dive into Flames’ Statistics on Hockey Day in Canada

As hosts at the Saddledome, the Flames dominate on home ice with a 6-2-1-1 record; however, they are just 4-3-4-0 as visitors. Currently, there have been 74 players to register a point during Hockey Day games, with franchise icon Iginla leading the pack with nine goals and six assists for 15 points.

Interestingly, the Flames have yet to play an American team on Hockey Day – until now – so a win or loss will not affect their records against Canadian teams, which stand at 5-2-4 against the Canucks and 5-1-0 against the Oilers. However, the team remains winless against the Senators (0-1-0), Canadiens (0-1-0), and Jets (0-0-1).

As the Flames prepare for another Hockey Day in Canada marquee matchup, there is no telling how the team will perform against the visiting Lightning. Thus far, they have underperformed in 2022-23 and are clinging to a playoff spot over the defending champions, Colorado Avalanche, who beat them 4-1 on Wednesday night at the Saddledome.

As the hockey community prepares to tune into the festivities across Canada, hosted from the city of Owen Sound, Ontario, the Flames need to dig into their past for inspiration to seize this opportunity and turn their fortunes around. Even though they find themselves in a unique situation, which includes facing an unusual opponent with a lot on the line in mid-January, the team must come out and represent Canada and the Flames organization on a day celebrating the game.

All stats are accurate as of Jan. 21, 2023 (before the Flames take on the Lightning)

Ryan Gagne is back for his second tour of duty with The Hockey Writers. In 2021 he wrote about the New York Islanders and now will embrace the challenge of covering the Calgary Flames. The best part of this new assignment is Ryan currently lives in Edmonton and will get to see both sides of the Battle of Alberta up close and personal. None of this will make much sense since he was born and raised in New England and the Boston Bruins are his still team.