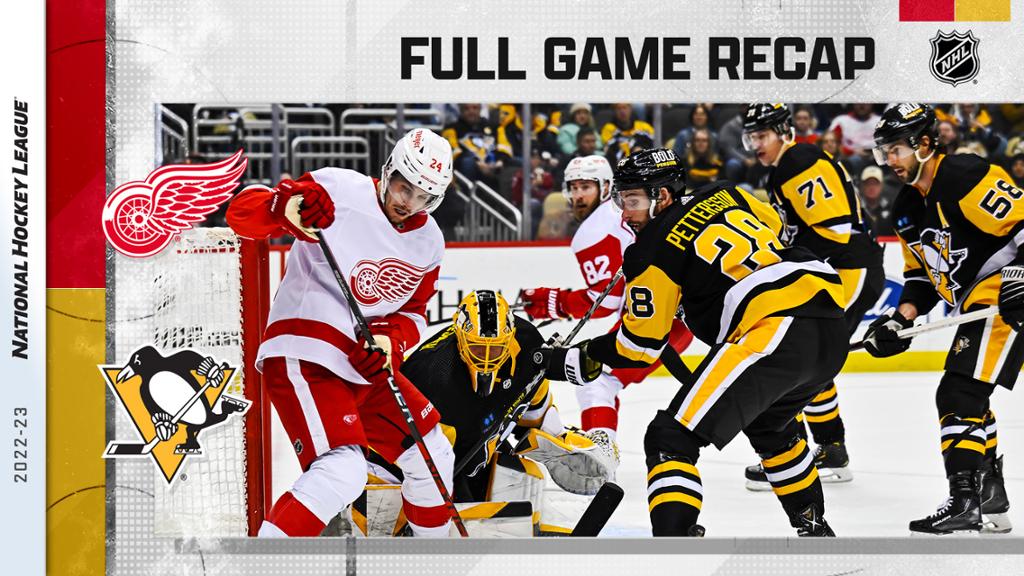 PITTSBURGH — Jake Walman scored 2:13 into overtime, and the Detroit Red Wings came back from down four goals to defeat the Pittsburgh Penguins 5-4 at PPG Paints Arena on Wednesday.

Walman scored on a backhand off a pass from Andrew Copp.

“That was a great game,” Walman said. “I think the boys showed a lot of resilience. Knew that wasn’t good enough after the first [period]. So we dialed it in after that.”

Magnus Hellberg made 19 saves after replacing Ville Husso following the first period for the Red Wings (15-11-7), who scored five straight after falling behind 4-0. Husso allowed four goals on 12 shots.

Jason Zucker scored twice, Jeff Carter had a goal and an assist, and Casey DeSmith made a season-high 41 saves for the Penguins (19-10-6), who have lost three in a row and four of five. They lost 5-1 at the New York Islanders on Tuesday.

“The game is too difficult if you don’t play in a five-man unit out there. For whatever reason the last few games, we’re disconnected.”

Detroit scored twice in 1:52 to tie it late in the third period.

“They’re a good team,” DeSmith said. “They came hard, and they kept pushing, even when they were down four goals. Credit to them for playing hard.”

Jonatan Berggren pulled it to 4-3 at 15:00 with a wrist shot after Penguins forward Sidney Crosby poked the puck away from Elmer Soderblom.

David Perron tied it 4-4 on a one-timer off a backhand pass from Michael Rasmussen during a power play at 16:52.

“We felt like we could build our game, and if anything, take it to tomorrow [at the Buffalo Sabres],” Perron said. “It was good we found a way. After we got the second goal, I think the belief kind of got bigger and bigger that we could make it a game here. We found a way. It was great.”

Drew O’Connor put Pittsburgh ahead 1-0 on its first shot of the game at 2:36 of the first, taking a pass from Kasperi Kapanen for a wrist shot from atop the right circle for his first goal in six games this season.

Carter made it 2-0 on a power play at 10:15. Kapanen passed above the crease to Carter for a wrist shot near the right post.

Zucker extended the lead to 3-0 at 14:15, driving from the far wall past Red Wings defenseman Filip Hronek for a backhand past Husso’s left pad.

Zucker pushed it to 4-0 at 19:27 with a power-play goal, tapping in a puck out of a scrum after Carter deflected a shot from Bryan Rust off the crossbar.

“It’s a great lesson for us again,” Penguins forward Evgeni Malkin said. “We have lots of experience in here. We’re an old team. We’re not young. Understand we need to play right the whole game.”

Video: [email protected]: Carter gets a feed from Kapanen and scores

Dylan Larkin cut it to 4-1 on a power play at 7:17 of the second period. After Hronek shot off the end boards, Larkin kicked the puck to his stick for a wrist shot and his 13th goal this season.

NOTES: The Red Wings are the second team this season to win after trailing by at least four goals. The Vancouver Canucks won 7-6 in overtime against the Montreal Canadiens after falling behind 4-0 on Dec. 5. … Detroit had come back to win from down four goals three times before. It won 7-6 against the Toronto Maple Leafs on Dec. 4, 1984, 5-4 against Toronto on Feb. 22, 1972, and 8-5 against the Boston Bruins on Nov. 3, 1960. … Pittsburgh defenseman Mark Friedman had four hits in 14:30 of ice time in his season debut. He had been a healthy scratch since being recalled from Wilkes-Barre/Scranton of the American Hockey League on Dec. 13. … Carter’s assist on Zucker’s second goal was his 400th in the NHL. He is the 100th player in NHL history to have at least 400 goals and 400 assists (423 goals and 400 assists in 1,202 games).