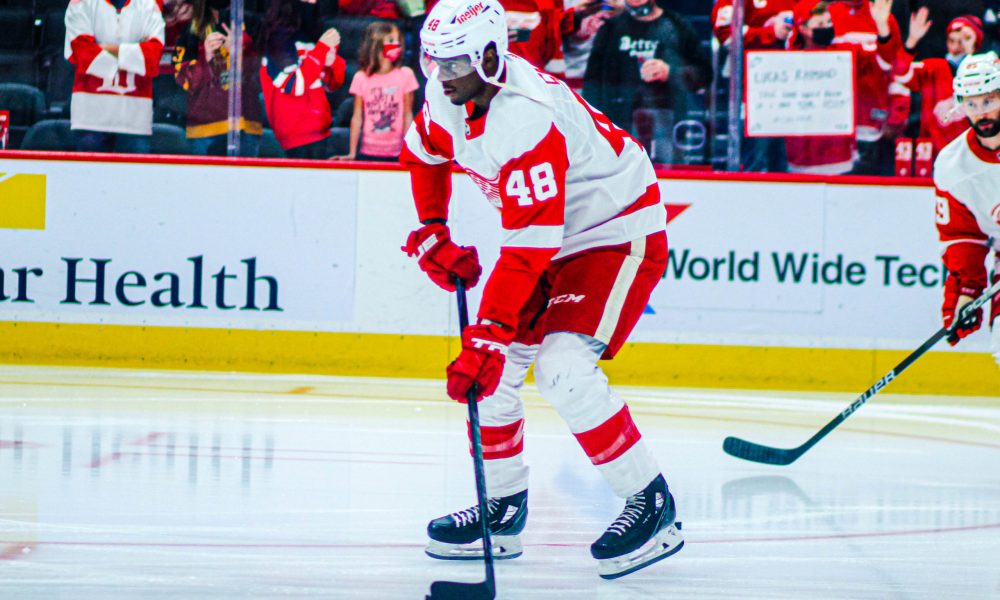 Givani Smith got back to the show on Saturday. The Detroit Red Wings were making the decision to recall right-winger Smith from the AHL Grand Rapids Griffins to play in Saturday’s 2-1 victory over the Minnesota Wild.

Gemel Smith gets four minutes for roughing. He gives Adam Gaudette a few punches before Gaudette drops the gloves himself.#Marlies get a power play out if it, though. pic.twitter.com/ypWun69Ubj

Determining that there was unfinished business, Smith then grabbed Gaudette’s sweater, yanking him back on the ice and deliving more punches.

His punishment for this crime? League suspension? An instigator penalty?

How about a double-minor for roughing.

Givani and Gemel Smith were briefly Red Wings teammates for three games last season before Gemel was claimed on waivers by the Tampa Bay Lightning. It was the first time Detroit skated with siblings in the lineup at the same time since 1969.

Red Wings In Case You Missed It

Pittsburgh: Seeing his first NHL action, Penguins rookie Sam Poulin is admitting that everything is going so fast for him. Pittsburgh Penguins

Boston: The Buins recalled Jakub Lauko from AHL Providence. He’s replacing David Krejci, injured on the Rasmussen high stick that led to the suspension of the Detroit player. Boston Bruins

Philadelphia: After undergoing his second back surgery in less than nine months, is the NHL career of Flyers forward Sean Courturier in jeopardy? Philadelphia Flyers

Islanders: The Islanders were honoring forward Josh Bailey on the occasion of his 1,000th NHL game. New York Islanders

Florida: Spencer Knight of the Panthers is the latest NHL goaltender to opt for the new Bauer laceless goalie skates that strap up like ski boots. Florida Panthers

Colorado: Leading scorer for the Avalanche, Valeri Nicushkin has been missing the past two games due to injury. Colorado Avalanche

Calgary: Jonathan Huberdeau talks about his first goal for the Flames. Calgary Flames

Vegas: Could the Golden Knights be looking to deal? With players returning from injury, they’ll soon have too many bodies on the roster. Vegas Golden Knights