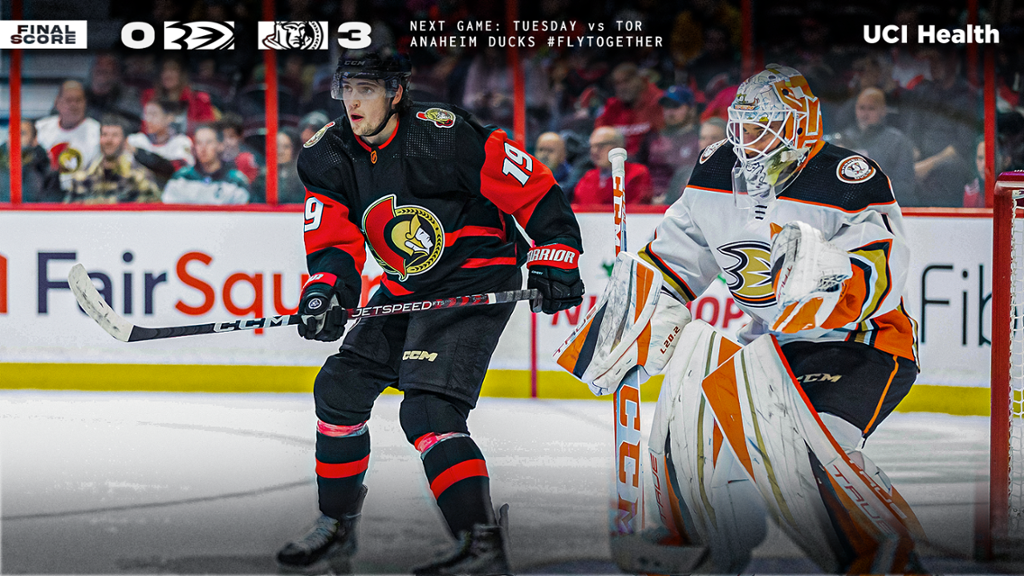 With the loss, Anaheim dropped to 7-19-3 on the season and 2-12-3 on the road. The Ducks will continue their four-game Canadian road trip tomorrow in Toronto.

Rookie goaltender Lukas Dostal stopped 35-of-38 Ottawa shots in his fourth career NHL start and his first of the 2022-23 season.

Talbot registered his first shutout as a Senator with 32 saves. The veteran netminder now owns a 16-7-2 mark all-time against the Ducks, including wins in both matchups this season.

DeBrincat and Parker Kelly scored for the Senators, who now have points in three straight games (2-0-1) and improved to 12-14-2 (26 points) on the season. Longtime Flyers captain Claude Giroux tallied two assists.

The Sens claimed an early two-goal lead with a strong first period on home ice, outshooting the Ducks 11-5.

Kelly opened the scoring on a impressive deflection, lifting a low point shot by defenseman Nikita Zaitsev up over Dostal’s left shoulder.

The goal was Kelly’s first of the season and ninth of his 68-game NHL career.

Anaheim fell to 4-12-3 on the season when surrendering the game’s first goal.

DeBrincat doubled the lead five minutes later as the finisher on a perfectly executed power-play faceoff set play. Brady Tkachuk won the draw cleanly back to Thomas Chabot at the point, who quickly slid the puck along the blueline to Giroux on the far side of the ice. Giroux worked his way downhill, looking for a centering pass through the Anaheim defense before finding a lane and giving Dostal little chance with a perfect feed to DeBrincat alone on the backdoor.

Senators forwards Tim Stutzle and Tyler Motte both left the game with injuries in the first period and did not return.

Dostal helped keep the deficit at just two early in the second period with consecutive left pad robberies of Pinto in tight, holding his ground when the rebound kicked right back to the Ottawa centerman.

Anaheim almost took advantage of the big stops moments later when Terry beat Talbot from the slot but had his shot ring the crossbar.

Dostal answered the call again late in the period when an Anaheim defensive breakdown led to a 3-on-0 Ottawa rush, but the rookie netminder somehow kept the puck out on a cross-crease pass, lunging to his right for a pad stop on winger Mark Kastelic.

The Ducks would push to get back within one early in the third, most notably on a couple chances in tight for winger Frank Vatrano, but minutes after the Senators weathered that attempt they would connect for a crucial insurance goal on the power play.

Giroux and winger Drake Batherson gained the line on a give-and-go play along the right wing wall, with Batherson sprinting ahead to the corner before zipping another cross-ice pass to DeBrincat, which he again buried past Dostal to give the Sens the exclamation point in a 3-0 win.

DeBrincat has 11 points in his last five games against the Ducks.