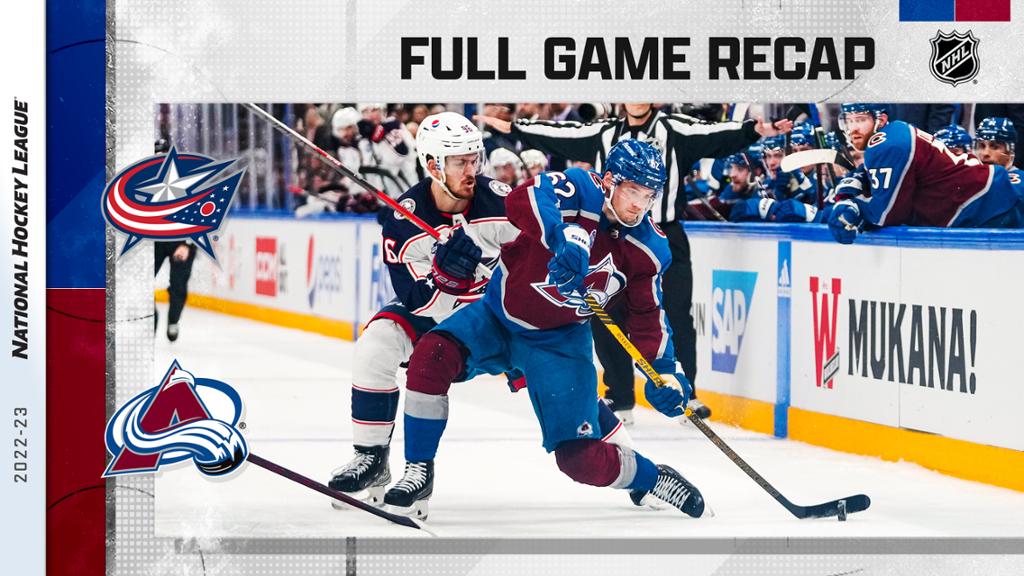 TAMPERE, Finland — Mikko Rantanen had a hat trick for the Colorado Avalanche when they defeated the Columbus Blue Jackets in his home country, 6-3 in the 2022 NHL Global Series at Nokia Arena on Friday.

Rantanen, who also had an assist, was born in Nousiainen, a little more than 100 miles south of Tampere.

The game was played before a sold-out crowd of 12,882, which got a show from the Finnish players involved.

Rantanen dominated with four points, including the game-winning goal, and six shots on goal for the Avalanche (5-4-1).

After the ice was cleared of the hats that rained down following Rantanen’s third goal — an empty-netter with 1:04 remaining which made it 6-3 — the crowd burst into a sing-song chanting of his name until the final buzzer.

“It was really cool, I didn’t expect it,” Rantanen said. “I thought the crowd was really good the whole game. I was happy there. I was surprised and it gave me chills, you know.”

Patrik Laine, who is from Tampere, had a goal and an assist and a game-high seven shots on goal for the Blue Jackets (3-8-0), who have lost four straight, getting outscored 23-7. Elvis Merzlikins made 30 saves.

“Yeah, it was fun for the fans, not fun for us right now,” said Laine, who was serving a slashing penalty when Rantanen scored the game-winning goal. “As a fan, and as a person, I’m happy for [Rantanen]; as a hockey player, not really.”

Nathan MacKinnon had four assists for the Avalanche, and Alexandar Georgiev made 36 saves.

“It was really cool, all the kids [here] know us,” MacKinnon said. “It’s a long way to come, but when you see the happy kids and the happy people, it makes it well worth it for sure.”

Avalanche forward Artturi Lehkonen (Piikkio, Finland) did not have a point or a shot on goal. Columbus goalie Joonas Korpisalo (Pori, Finland) did not play, but could start when the teams play here again Saturday (2 p.m. ET; NHLN, SN1, ALT, BSOH, SN NOW).

Rantanen scored his first of the game to make it 3-0 at 35 seconds of the second.

“I liked our effort tonight, I liked some of the things we did,” Colorado coach Jared Bednar said. “It still wasn’t a full 60 (minutes) from us. I thought the first period was real good from our guys, making sure we weren’t give up a lot, scoring chances against. Second period I thought they outplayed us both on special teams and 5-on-5. Then in the third period, we stepped up and elevated. Really good effort from the guys.”

A minute after Rantanen scored Jakub Voracek made it 3-1 on the power play, deflecting a shot from Laine past Georgiev at 1:35. Columbus had not scored a power-play goal in its first 10 games this season (0-for-25).

“It was a good hockey game,” Voracek said. “Even for the players, I am sure the other side felt the same way, it was an up and down hockey game, a lot of scoring chances, a lot of big saves. A lot of fight, a lot of hitting, lot of power plays. A fun hockey game to watch. Unfortunately, Colorado showed their experience.”

Laine made it 3-2 at 7:16 of the second with wrist shot from the left face-off circle.

“It seemed like the crowd was enjoying the night, that is a positive thing'” he said. “I feel like they were cheering for both teams. It was fun to play, but right now it is not a good feeling.”

Sean Kuraly made it 3-3 at 2:32 of the third period when he scored from the slot.

Rantanen scored a power-play goal at 8:54 of the third to put the Avalanche ahead 4-3 after Columbus had erased a three-goal deficit.

Cale Makar increased the lead to 5-3 with his first of the season at 10:49 of the third. Rantanen had an assist.

“We had a great start and we have to figure out a way to not keep giving up three-goal leads,” MacKinnon said. “But we did a great job of composing ourselves and handling it. A big power-play (goal) by Mikko to win the game. Happy with the effort the last few games for our team and hopefully we can play a better defensive game tomorrow night.”

NOTES: Laine has played three NHL regular-season games in Finland and has five goals, the most scored outside of North America by any NHL player. He scored a hat trick in his debut at the 2018 NHL Global Series, with the Winnipeg Jets, against the Florida Panthers in Helsinki. … Laine’s six points during games outside of North America are the third-most by any NHL player. Chicago Blackhawks forward Patrick Kane has seven points (three goals, four assists) in three games and former defenseman Dustin Byfuglien had seven points (two goals, five assists) in four games. … Laine is also the only player in NHL history to score a goal in each of his first three games in his home country. … The six goals by the Avalanche and nine combined goals were each the most in a game outside of North America. … Rantanen and MacKinnon joined Theo Fleury (five points, Oct. 10, 1998 in Tokyo) as the only players to score at least four points in a regular-season game outside of North America.