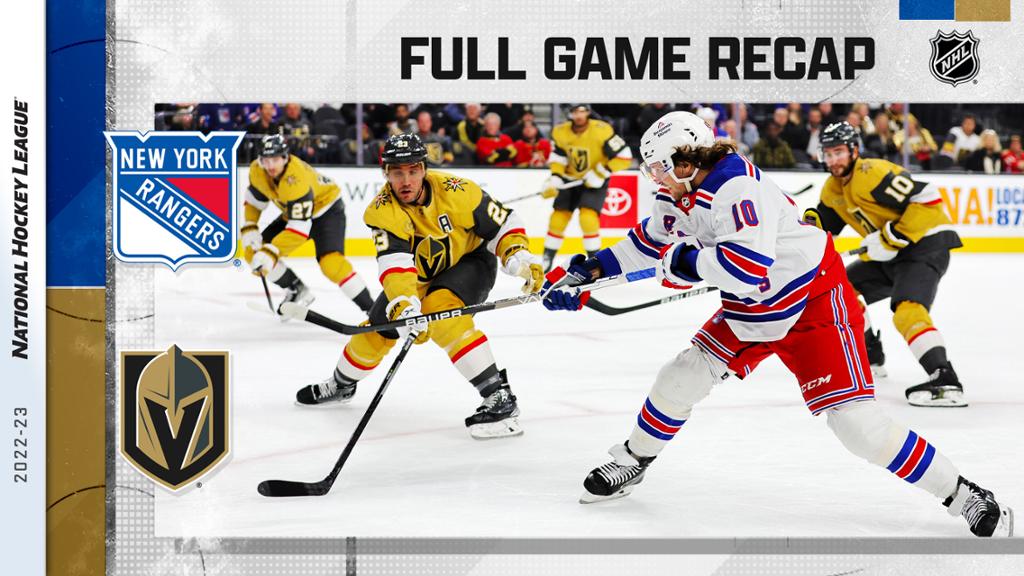 LAS VEGAS — Mika Zibanejad scored twice on the power play as part of the New York Rangers’ four-goal third period in a 5-1 victory against the Vegas Golden Knights at T-Mobile Arena on Wednesday.

“We come to a building that’s loud, to a team that’s really good, and we’ve got 1-1 going into the third on the road,” Zibanejad said. “So, we just regroup and see this as a good opportunity to get two points, and that’s what we did.”

Zibanejad also had an assist, and Artemi Panarin had three assists for the Rangers (13-10-1). Igor Shesterkin made 25 saves.

“It was a real good game. I mean, I thought we played great hockey until we put those two penalties and gave them some momentum there.” New York coach Gerrard Gallant said. “But I thought we played as solid a game as we played all year. … It was a team win tonight. Everybody came ready to play, from the fourth line right to our last defenseman. So, it was a good team game.”

“It’s not the end of the world, we got a lot of hockey left,” Vegas coach Bruce Cassidy said. “We put ourselves in a good position after the second period to get back into the game, then we mismanaged the puck, then it snowballs. It was an issue all game. We got away with it in the first period, get better in the second. We weren’t very good at managing the puck in the third..”

Zibanejad gave the Rangers a 2-1 lead with a power-play goal at 5:59 of the third period, one-timing a pass from Panarin. It was Panarin’s 600th NHL point.

Alexis Lafreniere made it 4-1 at 7:52 when he shot above a sprawled-out Thompson, who had lost his stick.

Zibnejad capped off the four-goal stretch with another power-play goal, one-timing another Panarin pass at 11:34 from the left face-off circle.

“Our power play got us going in the third and like I said, I just think it was a good solid game right through,” Gallant said. “But you know those games when you play well, sometimes you lose them and that’s always in the back of your mind too.”

Kaapo Kakko gave New York a 1-0 lead at 6:49 of the first period when he tipped in a K’Andre Miller wrist shot from the blue line for his first goal in eight games.

Marchessault tied it 1-1 at 13:38 of the second period. He roofed a pass from Chandler Stephenson on a 5-on-3 power play.

“We found our legs and some spirit in the second period,” Cassidy said. “Some emotion. We got into the game with a little bit of passion.”

NOTES: Gallant got his first victory against Vegas. He coached the Golden Knights from 2017-20, which included a trip to the 2018 Stanley Cup Final in their first season. He went 0-1-1 against Vegas last season, his first with New York. … Zibanejad has nine points (five goals, four assists) in a six-game point streak. … Adam Fox had two assists and has five points (one goal, four assists) on a four-game point streak. … Marchesssault has scored in three consecutive games.