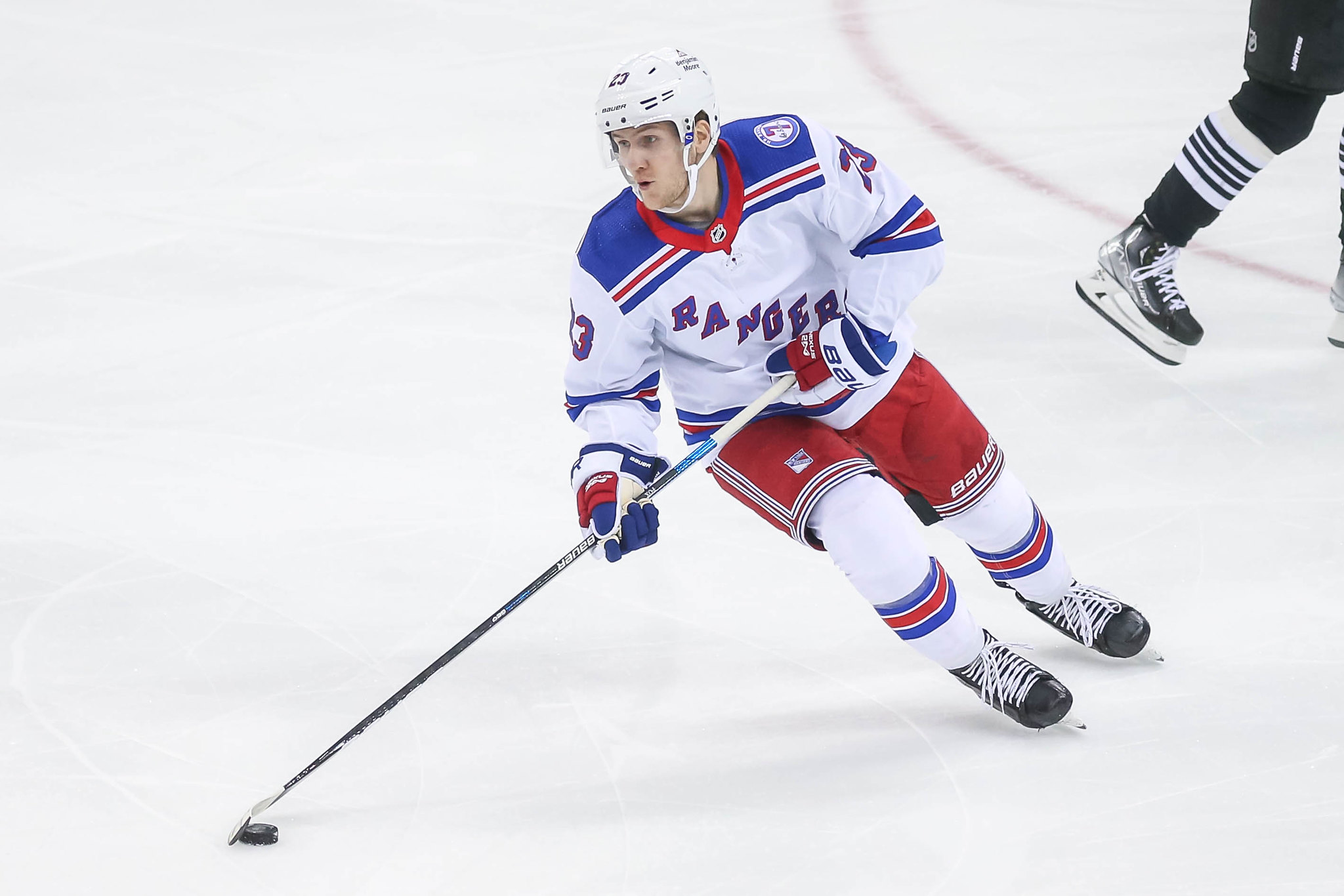 The New York Rangers (7-5-3) will attempt to continue the offensive outbreak they had during their last game in the 8-2 win over the Detroit Red Wings this evening against the Nashville Predators (5-8-1). Tonight’s contest is the first of back-to-back games as they will return home to play the Arizona Coyotes on Nov. 13 at Madison Square Garden.

The Rangers will look to win consecutive games this weekend to gain ground as they look to approach the first-place New Jersey Devils in the Metropolitan Division. Here’s our gameday preview.

Offense Breaks Out Against Red Wings, Kravtsov Out With Stomach Virus

During the third period of the Red Wings’ contest, the Rangers snapped a 2-2 tie with a six-goal barrage. Six players (Zibanejad, Kreider, Chytil, Vesey, Lafreniere, and Panarin) finished with two points each while Goodrow (three points) and Fox (four points) played even better for the club. Their top defenseman finished with the game-winning goal and a team-high three assists in their latest victory.

Head coach Gerard Gallant commented on their decisive win, “We took it to them and it just kept going in. It’s great for us to have a period like that, but I was more happy with how we played the game from start to finish. It’s got to carry over to the next game. We did some good things, we can show some great clips, the guys saw it on the bench. People went to the net and got some opportunities. Now, it’s one period and we got six goals, but you got to keep doing that consistently” (from ‘Rangers snap skid with huge third period in rout of Red Wings,’ New York Post, 11/10/22).

Given their inconsistent play during the first month of the season, having dominant periods similar to the final frame of their previous contest may be difficult to sustain. However, the Predators are tied for 24th in the NHL with 3.50 goals against per game played (GA/GP) so the Rangers have an opportunity to build off of the offensive success that they had against the Red Wings. Gallant said on Nov. 12 that Vitali Kravtsov will miss this evening’s contest with a stomach bug according to Vince Z. Mercogliano, who covers them for Lower Hudson Online. Between his latest illness and two separate injuries, the 22-year-old forward has had difficulty staying healthy as he has only played in six of 15 games during the 2022-23 season.

After the Predators’ 5-3 defeat to the Colorado Avalanche on Nov. 10, head coach John Hynes mentioned that they had lapses during the contest where they did not play as smart as they needed to, “You can’t be a hard team to play against when you give up easy offense like we have multiple times on this road trip, and then particularly tonight. We’ve got to be smarter. I think you look at some of the chances we give up, it’s unacceptable. The awareness, whether it’s some decisions with the puck or its decisions without the puck, we give up two breakaway goals in the second period. We’ve got to be smarter than that.”

Josi commented on their inconsistent play against the Avalanche, “I think there’s pockets in the game where we played well, and there’s pockets where we didn’t. They made us pay in the second, so we got to find a way to play well consistently for 60 minutes.”

Johansen emphasized the Predators need to improve their execution, “Against teams like that, especially with any team in this league, you go down like that it’s nearly impossible to come back. We got to find things in our game that we’re not doing well, and things that we know we’re not doing well, and we got to be better. We got to execute better and try and win some hockey games.” Tonight’s matchup is between two franchises that have been lacking stability during the early portion of their respective 2022-23 seasons and it will be intriguing to see which club can emerge victorious.

The Rangers’ top defenseman has at least one point in his last four games played in which he has two goals and five assists. Fox has consistently been an offensive contributor for them during his career despite being a defenseman.

The Predators recalled the 21-year-old forward who will make his NHL debut tonight against the Rangers. Hynes said that Parssinen will play on a line with two of their top playmakers in Forsberg and Granlund, which will give him the opportunity to capitalize on offensive chances they create for the rookie.

Tonight’s game has an 8:00 PM ET start time and will be broadcast on MSG.

Matt contributes content about the New York Rangers for The Hockey Writers. Matt has covered the Philadelphia Flyers, New Jersey Devils, and the Pittsburgh Penguins during his time writing for THW. For interview and podcast requests, follow Matt on Twitter which appears at the end of his articles.