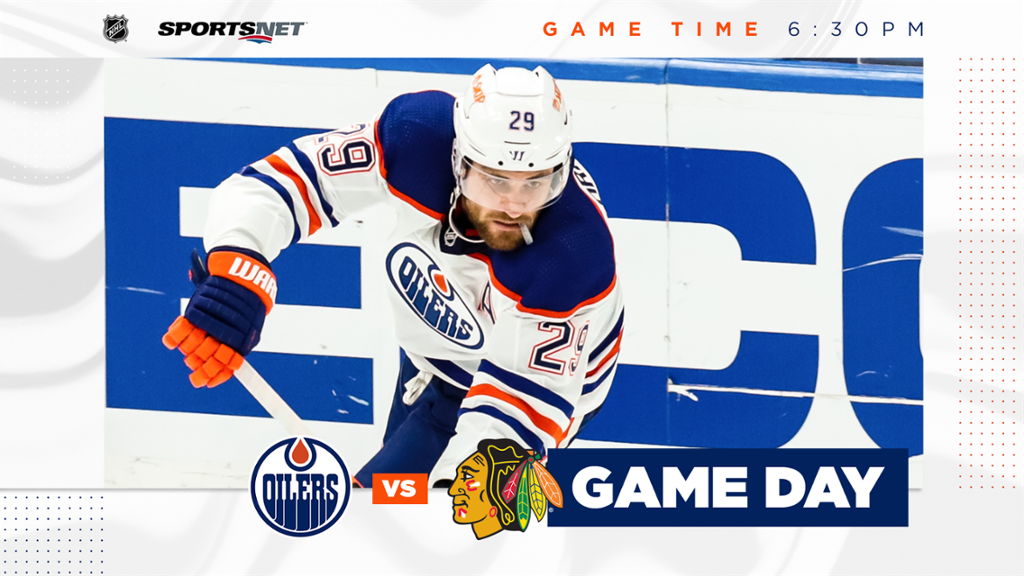 The Edmonton Oilers take on the Chicago Blackhawks at the United Center on Thursday in the second game of a back-to-back.

You can watch the game on Sportsnet West or listen live on the Oilers Radio Network, including 630 CHED, beginning at 6:30pm MT.

Subscribe to Oilers+ to unlock the Pre-Game Show that will begin at 6:00pm MT, along with more exclusive live and behind-the-scenes content.

EDMONTON, AB – Check back later in the afternoon following media avails for the Pre-Game Report.

Edmonton’s three-game road trip got started on the right note with a 3-1 victory over the St. Louis Blues at the Enterprise Center on Wednesday night.

Goaltender Stuart Skinner was exceptional, making 37 saves on 38 shots (including 20 in the second period) to secure his first win of the season and improve his record to 1-1-0, his goals-against average to 1.44 and save percentage to .957.

“Unbelievable,” Ryan Nugent-Hopkins said. “Both guys have been great for us when we’ve needed them, and Stu tonight in the second period made some massive saves to keep us going, keep us in it, and really without them they probably would’ve had a few more.”

Nugent-Hopkins had no idea he was sitting on 199 career goals coming into Wednesday, but his 200th NHL tally came with 6:16 left in regulation and went down as the game-winner before Zach Hyman added an empty-netter.

The Oilers are now winners of two straight and have allowed only five goals in their last three games after rectifying their 2-0 shutout defeat to the very same Blues back at Rogers Place on Saturday afternoon.

“I thought that game at Rogers Place was maybe a little bit tighter-checking than tonight was. Fewer chances,” Head Coach Jay Woodcroft said. “Tonight was a higher pace, and we skated at the level that we felt good about. That one in Rogers was decided in the first five minutes on a special team, but we felt good about a lot of things in that game.”

“We got a great goaltending performance from Stuart Skinner, we found a way to stick with things in a tough building, and it’s a chance for us to build on this as we head into Chicago tomorrow.”

They’ve been discounted by many this season, but the Chicago Blackhawks have now won four straight games after leading for all three periods in a 4-2 win on Tuesday over top opposition in the Florida Panthers.

After last season’s struggles with a 28-42-12 record and seventh-place finish in the Central Division, the Blackhawks are 4-2 to begin the year and riding some serious momentum after back-to-back losses to the Colorado Avalanche and Begas Golden Knights in their opening two games.

“”It’s fun,” Patrick Kane said. “I think last year we didn’t win a game until our 10th or 11th game, so it’s nice to get off to this start this year. I think when you get off to a good start, you can really propel that throughout the season, so hopefully that’s the case.”

Kane had a goal and assist, while former Oilers netminder Alex Stalock continued his hot start to the season with 29 saves on 31 shots. Stalock has put together a few solid starts in a row and is 3-1-0 on the year with a 2.09 GAA and .938 save percentage

The Oilers went 4-5-1 in the second game of a back-to-back last season… Chicago is one of the few teams Connor McDavid hasn’t consistently lit the lamp against with only three goals in 14 games… Leon Draisaitl is on a nine-game point streak against the Blackhawks with 16 points (6G, 10A) during that stretch… In 11 career matchups against each other, Evander Kane has 12 points while playing Patrick Kane, who has 16 points versus the Oilers forward… Tyson Barrie‘s 30 points in 34 games is the most the defender has against any NHL opponent…

The Blackhawks lead the NHL in shorthanded goals with four… Chicago has the NHL’s second largest discrepancy in powerplay time versus time short handed at -21:39 on the season… Chicago enters the game on a four-game win streak with a plus-seven goal differential during that time… Patrick Kane will tie Brent Seabrook for the third most games played in Blackhawks history with 1,114 on Thursday night, trailing only Stan Mikita and Duncan Keith… Kane has the most points among active NHLers vs. the Oilers with 59…