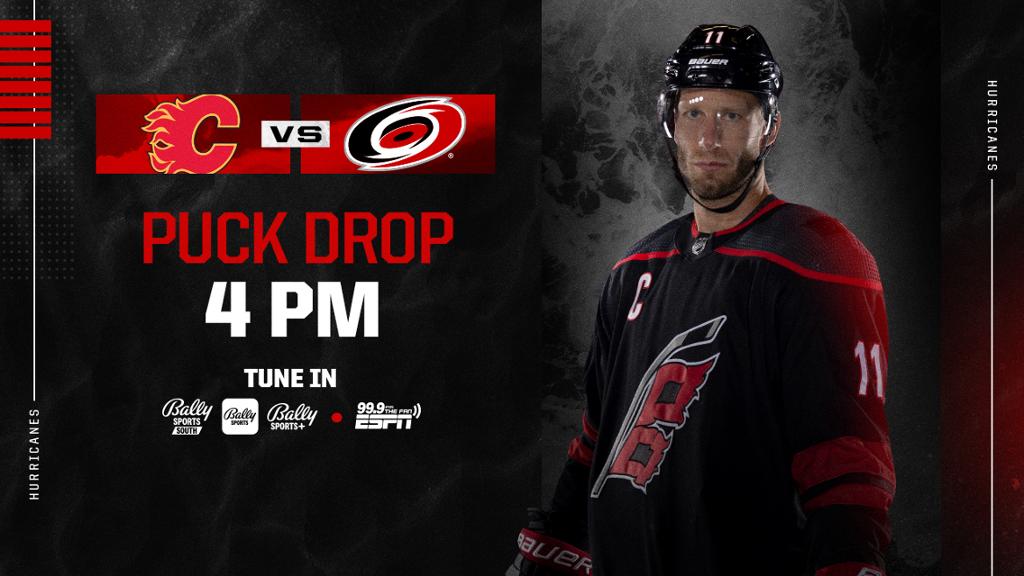 RALEIGH, NC. – The Carolina Hurricanes wrap up a back-to-back set of games on home ice, hosting the Calgary Flames for a rare Saturday afternoon matchup.

Last Time Out: The tough times continued for the Canes on Friday, although it didn’t look like it would be that way in the beginning. After six consecutive games without a power play goal, both units broke through in a big way. Each scored in the first period, inspiring confidence and giving Carolina an early 2-0 advantage against the Atlantic Division leaders. Aside from a few big saves from Pyotr Kochetkov, that was as good as the outlook would get for Rod Brind’Amour’s club. A late second period goal for Boston, combined with the Canes offering them six power play chances, allowed the Bruins to come from behind and force overtime. They’d then win it on the man advantage in OT, giving Carolina their fourth overtime loss in their last five games.

In The Crease: Pyotr Kochetkov’s start yesterday was his fourth in a row, making 38 stops en route to another unfortunate defeat. Through six starts this season he has allowed a total of just 14 goals, although his record now sits at 2-1-3. Kochetkov was not scheduled to start Wednesday night against Arizona but Antti Raanta was “nicked up” at morning skate ahead of the team’s meeting against the Coyotes, thus prompting Kochetkov to become the first Canes netminder to start three games in a row this season. Prior to yesterday’s game Rod Brind’Amour said that Raanta was healthy enough to back up, but the team wasn’t going to start him if he was less than 100%. During the Brind’Amour era in Raleigh it has been extremely uncommon for a goaltender to start games on back-to-back days, so the question of whether Raanta is healthy enough to start today’s contest is a big one.

Good On The Back Half: Through three back-to-back sets so far this campaign, the Canes are 3-0-0 in the second game.

On The Other Side: Calgary comes to town for their final bout of a six-game road trip out east. They are 2-2-1 on the venture thus far, taking wins from both Florida and Philadelphia. Former Hurricane Elias Lindholm leads the way for the team with 16 points in 20 games this season. A key component to their game, like Carolina, is getting pucks on net. They have averaged 35.6 shots per contest this season, third most in the NHL.

Parking: Coming to today’s game? Save money by purchasing your parking in advance. Click here to learn more.

What Are We Wearing?: The Canes are slated to wear their black uniforms today.

AFTER THE FINAL HORN:

The team will have an off day on Sunday. They’ll return to practice on Monday before they begin another six-game road stretch.