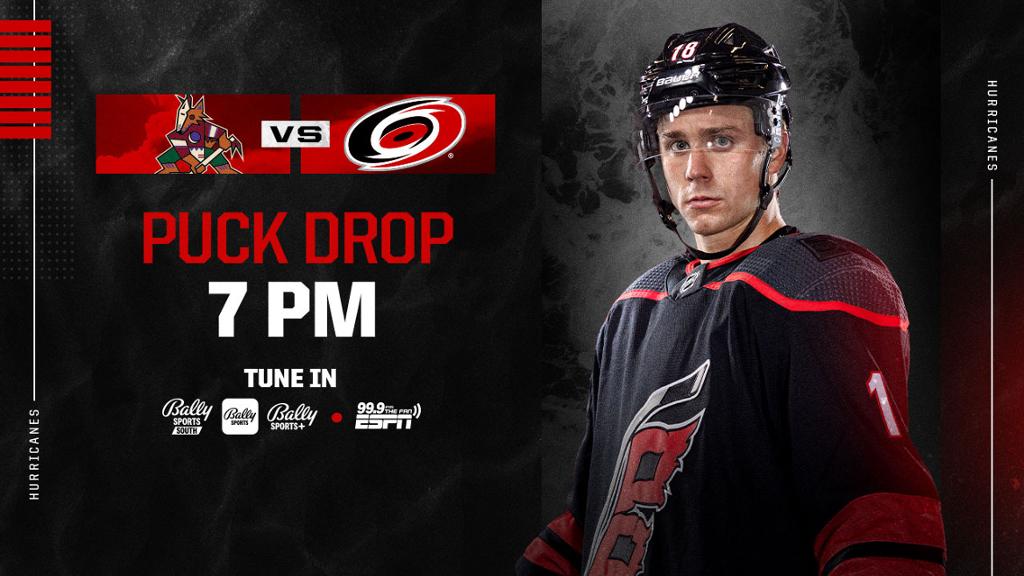 RALEIGH, NC. – The Carolina Hurricanes are back at home and opening a stretch of three games in four days Wednesday, beginning with a head-to-head matchup against the Arizona Coyotes.

Last Time Out: The Canes fell behind 3-0 Monday night in Winnipeg and with time winding down in the third period it looked like the team was headed for another frustrating defeat. Instead, Rod Brind’Amour and staff elected to pull Pyotr Kochetkov in favor of the extra attacker with just under six minutes left to play and it led to a feverish comeback. Jaccob Slavin, Andrei Svechnikov and Martin Necas all scored in the final 4:48 with the extra attacker on, earning Carolina a point for a third consecutive game. However, just like their previous two, they’d fall during three-on-three play.

Lending A Helping Hand: Sebastian Aho recorded an assist on all three six-on-five goals for Carolina, becoming the first Hurricanes player to record three assists in a period since Jake Gardiner on 2/8/20. He now has 22 points in 19 games and a three-game point streak.

In Net: Rod Brind’Amour shared Monday pre-game that because Kochetkov earned the nod for back-to-back starts against Minnesota and Winnipeg, Antti Raanta is “more than likely” to take on his former team tonight. Raanta began the year 3-0-1, but has been on the wrong end of three consecutive decisions despite allowing a total of just eight goals in them.  He has also posted a 5-0-1 record, 1.98 goals-against average and .936 save percentage in six career regular season games against the Coyotes.

Special Teams Struggles: The Canes were held without a power play goal again Monday night at Canada Life Centre, moving their streak to five straight games without a marker on the man advantage. Their 14.3% success rate thus far this season now places them 30th out of 32 in the league.

On The Other Side: Arizona comes to town in the midst of a 14-game road trip that ranges from November 5 – December 7. They started the venture with three straight wins but have since dropped four in a row, including a shootout loss Monday in the Music City. Their 14 standings points on the season rank third-fewest in the NHL and no team has scored fewer than their 40 goals. Offensively, Clayton Keller leads the way with 18 points in 17 games.

What Are We Wearing?: The Canes are slated to wear their black uniforms tonight.

The team will travel to Boston Thursday night ahead of a Friday afternoon 1 p.m. contest against the Bruins. They’ll then return home to take on the Calgary Flames Saturday at 4 p.m.