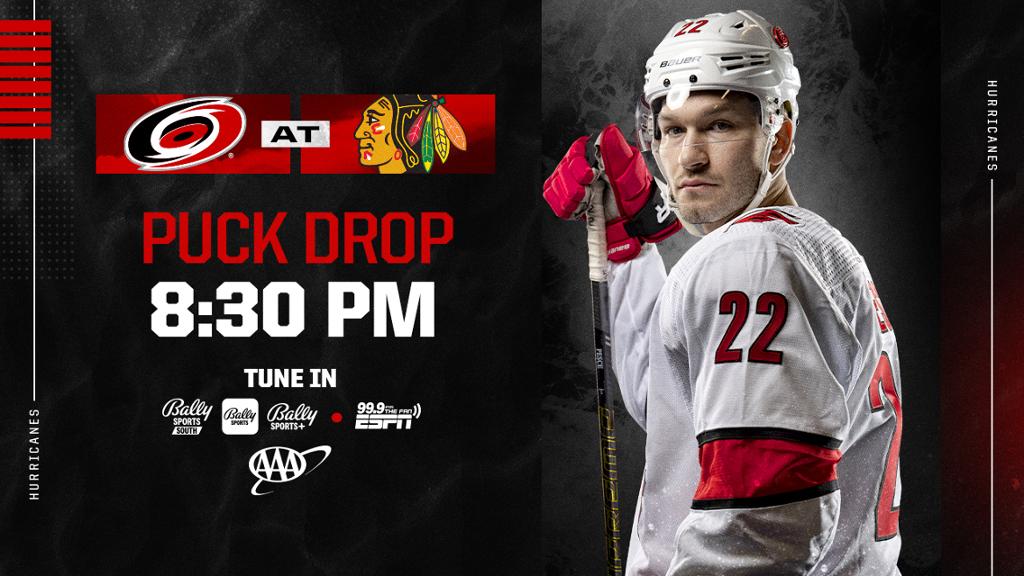 CHICAGO, IL. – The Carolina Hurricanes wrap up a two-game road trip Monday as they take on the Chicago Blackhawks.

Last Time Out: The Canes pulled up to Ball Arena after a statement 7-2 victory over the Edmonton Oilers just two days earlier, but they struggled to produce the same offense. Penalties once again plagued the team, allowing Colorado to open the game’s scoring on the man advantage. Antti Raanta did what he could to keep his team in the contest but he received only one goal of support as the Avalanche ran away with the contest. Jordan Staal earned that lone tally for the Canes, putting home a feed from Jordan Martinook.

The J Line: Saturday night was the second goal in as many games for Jordan Staal. It was also the second consecutive contest that his line, including Jordan Martinook and Jesper Fast, have all three factored in on the same marker.

Numbers For Necas: Despite being held off of the scoresheet Saturday night, Martin Necas 19 points in 15 games this season have earned him a share of tenth among all NHL skaters. His six multi-point games pace the team thus far this year.

Svech’s Success: In addition to being tied for third league-wide with his 11 goals already this season, forward Andrei Svechnikov enters tonight’s contest with 17 career points in 14 meetings against the Chicago Blackhawks.

On The Other Side: Under first-year head coach Luke Richardson, the Hawks have been competitive to start the season. Including wins over Florida, Detroit and Los Angeles, the Hawks have made an effort to keep the puck out of their net, despite a slew of injuries in the crease. The team has used four different netminders already this season but has allowed a total of just 42 goals in 14 games. Patrick Kane (12) and Jonathan Toews (10) lead the way in points for the club, with former Hurricane Max Domi (10) also near the top of the team’s leaderboard.

What Are We Wearing?: The Canes are slated to wear their white uniforms tonight.

The team is scheduled to travel back to Raleigh post-game. Tuesday is set to be a practice day at Invisalign Arena.