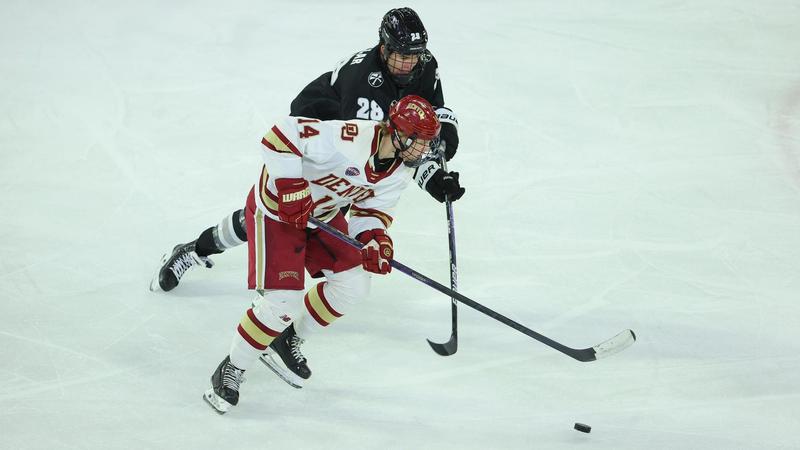 
DENVER  – The No. 1 University of Denver hockey team returns to action this weekend as the Pioneers host the Omaha Mavericks in a post-Thanksgiving series at Magness Arena. Friday’s matchup starts at 7 p.m. MT while Saturday’s starts at 6 p.m., and both games will be broadcasted on NCHC.tv.

DU will honor the late Peter McNab prior to Saturday’s game.

The Pioneers are coming off their first bye weekend of the season following their sweep at then-No. 12 North Dakota on Nov. 11-12, which pushed their winning streak to three games and overall record to 9-3-0 on the season.

Denver defeated UND 3-2 on Nov. 11 and 6-3 the following night to earn its first sweep in Grand Forks with two regulation wins since Jan. 29-30, 2010. The Pioneers picked up its first weekend sweep of the Fighting Hawks since March 15-16, 2019 in the NCHC Quarterfinals at Magness Arena, the team and ended a six-game overall losing streak to UND and a seven-game losing stretch at Ralph Engelstad Arena.

Freshmen Jared Wright and Aidan Thompson led Denver offensively in the weekend, as Wright had three goals and one assist in the two outings en route to being named NCHC Forward of the Week. Thompson had two goals and one assist and was recognized as the conference’s Rookie of the Week on Nov. 14. Sophomore Carter Mazur tallied twice on Saturday and now leads the NCAA with 12 goals, and goaltender Magnus Chrona made 21 saves each night.

Omaha is also coming off a bye weekend after splitting its road series at Minnesota Duluth on Nov. 11-12, winning 3-2 in the opener before falling 3-2 in overtime in the Saturday finale. The Mavericks, who will be playing consecutive road series for the first time season, own a 5-5-2 overall record but are 4-1-1 on the road in 2022-23.

Denver will be starting a four-game homestand this weekend and will play 10 of its next 12 contests at Magness Arena. The Pios will also be wrapping up a stretch of playing eight straight conference games, with the squad presently owning a 5-1-0 mark and leading the NCHC standings with 16 points.

REMEMBERING PETER MCNAB: The Pioneers will honor former forward Peter McNab prior to Saturday’s game and will wear his No. 15 on the players’ helmets this weekend.  McNab played at DU for three seasons from 1970-1973, helping the team to at least the national semifinals each year.

He ranks 10th all-time in program history with 170 career points and is tied for sixth in goals with 78 with Dallas Gaume, reaching those marks in only 105 NCAA games played.  In 1972-73, McNab led the Pios with 72 points and was named to the All-WCHA First Team and the NCAA All-Tournament Team.

Born in Vancouver, British Columbia, but grew up in San Diego, California, McNab went on to play 14 seasons in the NHL with the Buffalo Sabres, Boston Bruins, Vancouver Canucks and New Jersey Devils before spending 35 years as an NHL broadcaster, including the past 27 as a TV analyst with the Colorado Avalanche.  Inducted into the U.S. Hockey Hall of Fame last December, he still ranks 21st among Americans in NHL scoring with 813 points (363 goals, 450 assists).

PIONEERS ON BLACK FRIDAY: DU will be playing on the Friday after Thanksgiving for the first time since hosting Providence College on Nov. 23, 2018 at Magness Arena.  The Pioneers won 3-1 on Black Friday before tying the Friars 4-4 on that Saturday to close that series.

CONNECTIONS: Volunteer Assistant Coach Ryan Massa graduated from Nebraska Omaha and spent four years as a goaltender for the Mavericks (2011-2015), helping the program to its first Frozen Four in 2015 … Head Athletic Trainer Aaron Leu earned his bachelor’s degree in Exercise Science from Creighton University in Omaha in 1995 and picked up his master’s degree from the University of Nebraska at Kearney in 1996 … Lane Krenzen’s younger brother, Nolan, plays for Omaha … Justin Lee (Lincoln Stars, 2018-19), Carter Mazur (Tri-City Storm, 2019-21), Aidan Thompson (Lincoln Stars, 2020-22) and Jared Wright (Omaha Lancers, 2021-22) played junior hockey in the state of Nebraska … Wright was a teammate with Cam Mitchell in Omaha last season … Thompson played with Joaquium Lemay with Lincoln in 2021-22 … Justin Lee played with Kaden Bohlsen briefly with the Fargo Force in 2018-19 and was teammates with Brock Bremer in Lincoln during the same USHL season … Ty Mueller played two seasons with the AJHL’s Sherwood Park Crusaders with Mike Benning (2018-2020) … Victor Mancini played on Green Bay with Matt Davis in 2020-21 … Tyler Haskins was a teammate of Simon Latkoczy with the USHL Madison Capitols last season … Massimo Rizzo was a teammate of Omaha’s Ray Fust with the BCHL Chilliwack Chiefs in 2020-21 … Shai Buium played with Griffin Ludtke with the Sioux City Musketeers in 2020-21 … Tristan Broz and the Mavs’ Tyler Rollwagen are both from Bloomington, Minn., and played together in 2020-21 with the USHL Fargo Force … Omaha’s Jonny Tychonick and DU’s Carter King, Rieger Lorenz and Matt Davis are all from Calgary, Alberta … Mavericks graduate student Tyler Weiss is a draft pick of the Colorado Avalanche.

SCOUTING THE MAVERICKS: Omaha is seventh in the NCHC standings with six points and a 1-2-1 record.  The Mavs are led offensively by Jack Randl, who is first on the team with 15 points and ranks tied for second in the NCAA with 11 goals.  Ty Mueller ranks second on the squad with 11 points (4g/7a), while Tyler Weiss leads Omaha in assists (8) and is third in scoring with 10 points. Goaltender Jake Kucharski has seen the most action between the pipes this year, appearing in nine contests and starting in eight.  He has a 3-4-2 record, 2.34 goals-against average and .921 save percentage.

FINDING SUCCESS IN NORTH DAKOTA: The Pios ended a six-game losing streak to the Hawks with the two wins on Nov. 11-12 and grabbed a rare weekend sweep as well.  Denver’s last two-game sweep of North Dakota was March 15-16, 2019 during the NCHC Quarterfinals at Magness Arena, and the team’s last wins during the regular season where it earned all six conference points was Feb. 12-13, 2016 in Denver.

The Pioneers picked up two regulation wins over a weekend in North Dakota for the first time in the NCHC era, as they last accomplished the feat on Jan. 29-30, 2010 when both squads played in the old WCHA.  DU won two NCHC overtime games in Grand Forks on Jan. 26-27, 2018, but both of those officially went down as a tie as they came in the second OT where the Pioneers earned the extra point for the purposes of the NCHC standings only.

FRESHMEN SHINE IN NO-DAK, EARN NCHC HONORS: Rookies Jared Wright and Aidan Thompson scored their first collegiate goals on Nov. 11 at UND and led Denver offensively in the weekend sweep of the Fighting Hawks.  Wright scored the game-winning goal in both contests and finished with three goals and one assist in the two outings after posting multiple points each night.  Wright had a goal and an assist on Nov. 11 before picking up his first career multi-goal contest on Nov. 12 and earning NCHC Forward of the Week honors on Nov. 14.

Thompson finished the two games with two goals and one assist.  He had his first career multi-point contest on Friday as he added a helper with his first tally and then recorded his second marker on Saturday.  The Fort Collins, Colorado, native was recognized as the NCHC Rookie of the Week on Nov. 14.

DU’s previous fastest three goals scored was 12:32 on Oct. 8 vs. Maine, while’s its previous fastest four markers were in 24:06 on Oct. 7 vs. Notre Dame.  That season-opening outing against the Fighting Irish also marked the fastest five markers with the Pios accomplishing that feat in 43:57.

MONTH-BY-MONTH: With Denver’s two wins on Nov. 11-12 at North Dakota, the Pioneers have guaranteed themselves at least a .500 record to close the month of November (3-1-0).  DU finished with an above .500 record in all seven months last season, and the program has posted a .500 mark or better in 12 straight months dating back to January 2021.

GOOD TO BE HOME: The Pioneers just wrapped up a 10-game stretch where they played six of those outings on the road, posting a 4-2-0 record in the contests away from Magness Arena.  Denver now begins a four-game homestand and is set to play in its friendly confines in 10 of the next 12 contests.  Minus the two bus rides down to Colorado College for games on Feb. 4 and March 4, the Pioneers only have three more road trips out of the state during the regular season.

HOME-ICE ADVANTAGE: The Pios are 29-4-1 in their last 34 contests in their own rink and sport a 37-8-2 record at Magness Arena since the start of the 2019-20 campaign.  Denver went 17-1-1 during the 2021-22 season in its own barn and had a 22-1-1 mark in games in the state of Colorado, including winning both matchups at the Denver-hosted NCAA West Regional in Loveland, Colo.

TOUGH EARLY SEASON STRETCH: The Pioneers have played five opponents and nine games against ranked teams through their first six weeks of the season, all of whom have been inside the top 15.

BATTLE AT BALL ARENA: The Pioneers game on Friday, Jan. 27 vs. Colorado College Tigers will now take place at Ball Arena, home of the NHL Colorado Avalanche, instead of DU’s Magness Arena. This will be the first regular-season game that Denver will play at Ball Arena. The team did play an exhibition contest versus the University of British Columbia on Oct. 6, 2012 due to a U.S. Presidential Debate happening at Magness Arena that same week.

TOUGH EARLY SEASON STRETCH: The Pioneers will be playing their fifth opponent and eighth and ninth games in the first six weeks of the season against a ranked squad, all of whom have been inside the top 15.

IN THE POLLS: Denver regained the No. 1 overall ranking in the nation in both the DCU/USCHO.com and USA Today/USA Hockey Magazine polls on Nov. 14 and retained the position on Monday.  In the latest rankings, the Pioneers received 41 first-place votes in the DCU/USCHO.com poll and 25 top votes in the USA Today/USA Hockey Magazine poll.  The Pioneers have been in the top four all season and returned to the No. 1 spot after being there for the first three polls of the campaign.

Overall, the NCHC has three teams in the rankings with St. Cloud State (3/3) and Western Michigan (15/15) in both polls.  North Dakota and Minnesota Duluth received votes in both polls.  UMD fell out of the top-20 rankings on Nov. 14 for the first time since Feb. 29, 2016, ending a run of 154 straight weeks and five short of Denver’s record of 159.

DARN GOOD DORNBACH DEBUT: Fifth-year senior Casey Dornbach has points in 10 of the 12 games this season after starting his Denver tenure with point streaks of three games from Oct. 7-14 (3g/2a) and six games from Oct. 21-Nov. 4 (3g/8a).  The senior transfer’s six-game run tied his career long, which included him recording a season-best three assists on Oct. 28 at Miami to reach 100 career points.

Dornbach tallied twice in his Denver debut on Oct. 7 vs. Notre Dame and appeared in his 100th career game the next night on Oct. 8 against Maine.  He joined the Pioneers this past summer after spending the previously four years at Harvard where he served as the Crimson’s team captain in 2021-22 and graduated with his bachelor’s degree in May.

Visit DenverPioneers.com for complete coverage of all 18 of DU’s NCAA Division I sports