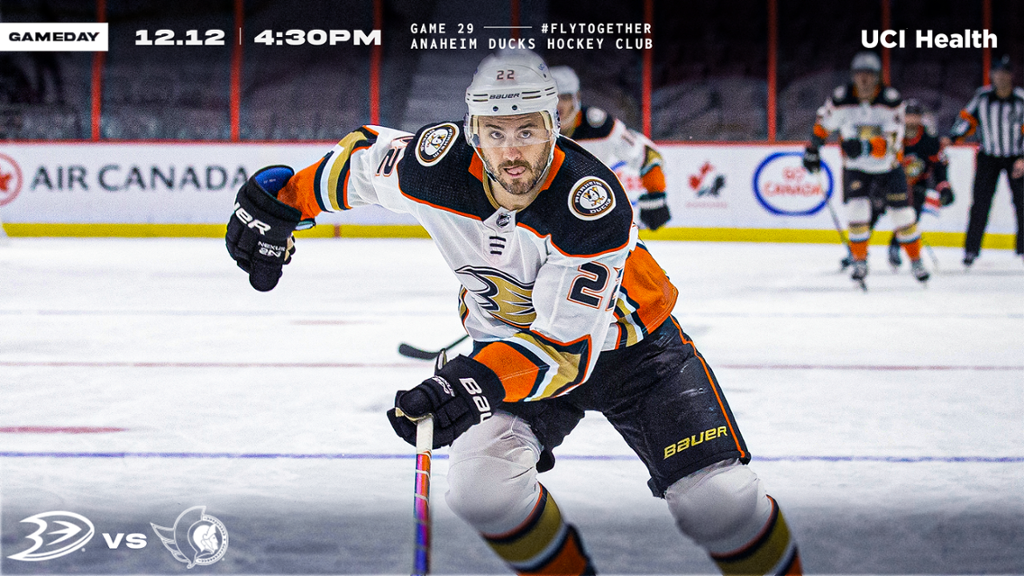 The Ducks are set to kick off a week-long road trip north of the border, tonight visiting the Canadian capital to battle the Ottawa Senators at Canadian Tire Centre.

Anaheim hits the road looking to improve on its 2-11-3 mark away from home ice this season, making stops in Ottawa, Toronto, Montreal and Edmonton this week.

The Ducks split a two-game homestand last week at Honda Center, earning an overtime victory against the Hurricanes before suffering a 6-1 setback to the rival Sharks.

“Obviously, we want to string some wins together here,” Sam Carrick said. “It’s not good enough. It’s frustrating. As a whole group here, we’re all in this together. The only way we are going to get out of it is together. You can’t really feel sorry for yourself, this league is too relentless. We’ll move on and look to have a good road trip here.

“We were just playing a little bit too cute and not getting to what has made us successful. Getting pucks in, wearing teams down with the cycle game. The neutral zone was a big factor in the outcome. I think we can do a little bit better job of recognizing when to get the puck deep and when to make plays. I think we can be better at that.”

The Ducks and Senators will meet today for the second time in less than a month, after Ottawa won the Southern California half of the two-game season series with a 5-1 Black Friday triumph at Honda Center.

“Ottawa is a team that has been struggling the last few years and now they are on the upswing,” Ryan Strome said that day. “You saw the hunger level from them…Tonight was not a great result for us but, in terms of in the eyes of the guys, the commitment and the buy-in is not an issue. It’s just a matter of execution.”

Ottawa (11-14-2, 24 points) has earned points in five of its seven games since beating Anaheim on Black Friday, including a 3-2 victory Saturday night in Nashville, but still sits last in the Atlantic Division.