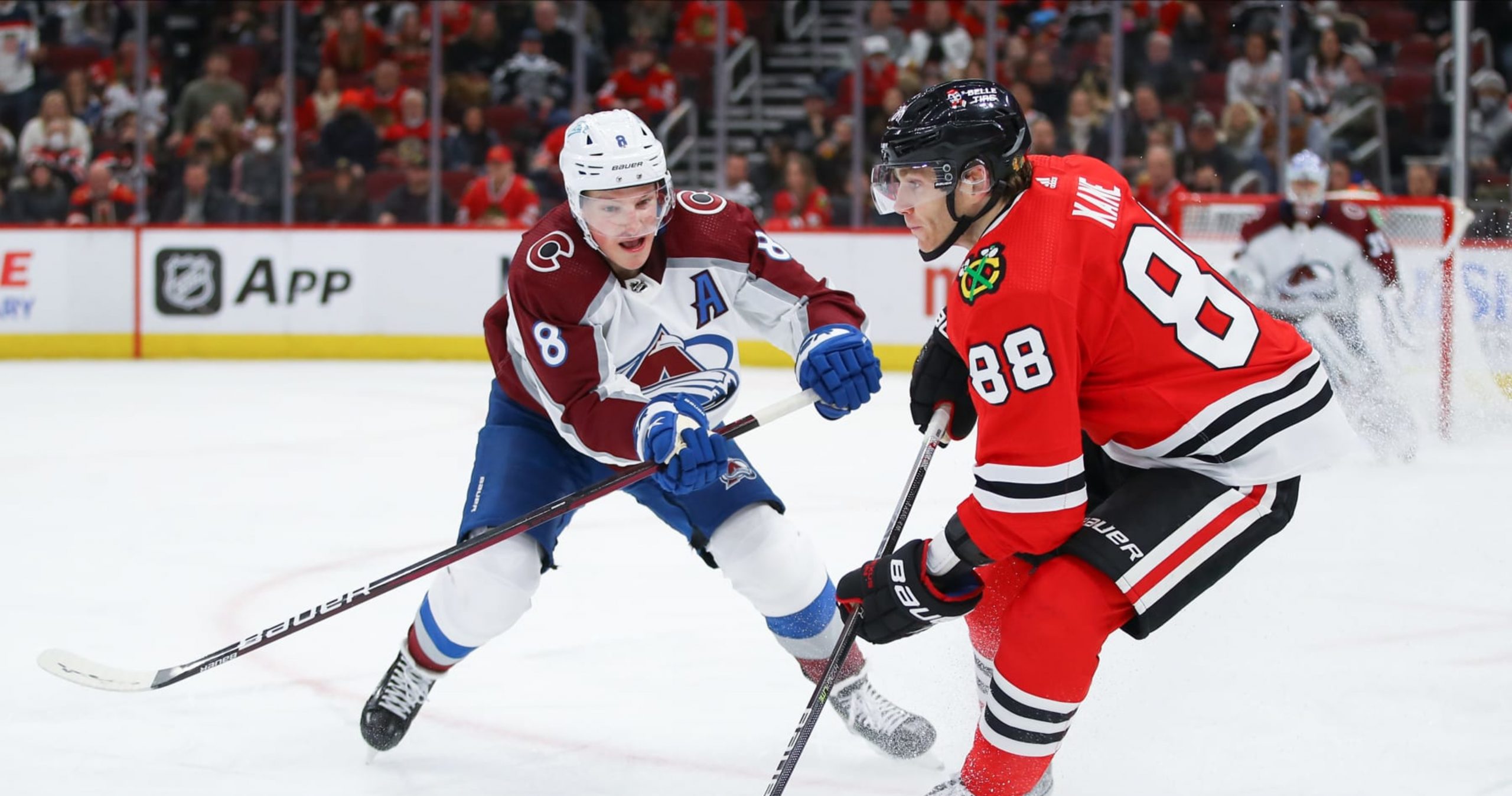 Predicting the Most Active Teams at the 2023 NHL Trade Deadline

The NHL’s annual trade deadline is
scheduled for 3 p.m. ET on March 3. While we’re still
three months away from that date, it’s a good opportunity to get an
early start on predicting which teams could be the most active
leading up to deadline day.

Some teams, like the Chicago
Blackhawks, are in the midst of rebuilding their rosters and already
sinking in the standings. They’re the most likely to become sellers,
attempting to peddle players who no longer fit into their future
plans for draft picks and promising youngsters.

Others, such as the defending Stanley
Cup champion Colorado Avalanche or Boston Bruins, are likely to become buyers as they look to give themselves a better opportunity at winning the Cup.

Of course, a lot could happen over the
next three months that could affect how active those teams become in
the trade market. Nevertheless, we anticipate that the following
eight clubs—four buyers and four sellers—will be busy as
deadline day draws near.

Do you agree or disagree with our
predictions? Is there a club on this list that doesn’t belong or one
that you feel we’ve missed? Let us know in the comments section.

Despite starting the season with stars
Brad Marchand and Charlie McAvoy recovering from offseason surgeries,
the Boston Bruins stormed from the gate. With Marchand and McAvoy back in the lineup, the Bruins, who were sitting second in the overall NHL standings heading into play Friday, look like early favorites to win the Stanley Cup.

General
manager Don Sweeney has shown a willingness to wheel and deal near
the trade deadline. Defenseman Hampus
Lindholm was acquired before last season’s deadline, while winger
Taylor Hall was brought in at the 2021 deadline.

Marchand, Patrice Bergeron and David
Krejci are the only Bruins remaining from the 2011 Stanley Cup-winning team. This season could be the last opportunity for those aging stars
to win a championship. Boston is pressed for salary-cap space, but given Sweeney’s history of deadline deals, it’ll likely be active leading up to March 3.

The Bruins could consider balancing
their blue line with another right-shot defenseman. They might also
seek a middle-six forward for their second or third line. That could
involve trading a salaried player in a dollar-in, dollar-out deal. If
a Bruin ends up on long-term injured reserve, Sweeney could use that
salary-cap relief to his advantage in the trade market.

The Anaheim Ducks are in the midst of a roster rebuild under general manager Pat Verbeek. He shipped out pending free-agent defensemen like Josh Manson and
Hampus Lindholm at last season’s deadline. Verbeek also traded pending UFA winger Rickard Rakell to the Pittsburgh
Penguins.

Stuck at the bottom of the NHL
standings, the Ducks are unlikely to surge into playoff contention
before the March 3 deadline. That could send Verbeek into the
trade market to peddle more pending UFAs for draft picks,
prospects and young players.

Verbeek once again has some pending free-agent blueliners to dangle as trade bait for postseason contenders that are seeking
experienced defensive depth. John Klingberg, Kevin Shattenkirk and
Dmitry Kulikov could draw various degrees of interest.

Forwards Adam Henrique and Jakob
Silfverberg could also become valuable trade chips. Both have a year
remaining on their respective deals, with annual average values between $5.3
million and $5.8 million. The 32-year-olds also have modified
no-trade clauses but might not object to getting dealt to a contender
before deadline day.

The Colorado Avalanche became Stanley
Cup champions last season in part because of their acquisitions
leading up to the trade deadline. Defenseman Josh Manson and forwards
Artturi Lehkonen and Andrew Cogliano played key roles in the championship run, earning themselves contract extensions.

Joe Sakic was the general manager
behind those moves. He has since moved up to the Avalanche’s
president of hockey operations, and we can expect his successor, Chris
MacFarland, to monitor the trade market for deals that improve the team’s chances of successfully defending the Cup.

The Avalanche will have a projected
$5.2 million in cap space at the trade deadline. That could provide
them with some wiggle room to bring in a player or two.

MacFarland could seek an experienced second-line center to fill the void left by Nazem Kadri’s offseason departure to the Calgary Flames. Bringing in a second- or
third-pairing defenseman could be another option given Bowen Byram’s
injury history. The Avs GM could also look at bolstering the checking-line depth.

When the Chicago Blackhawks officially
hired Kyle Davidson as general manager on March 1, he said that it
was time for his club to rebuild. He wasted little time getting
started, trading notable players like Brandon Hagel and Marc-André Fleury by the March 21 trade deadline.

With the Blackhawks sinking toward the
bottom of the NHL standings, expect Davidson to become a seller once
again. His moves last season brought in young
players Taylor Raddysh and Boris Katchouk (both now 24) along with two conditional
first-round picks and a second-rounder.

Longtime Blackhawks stars Patrick Kane
and Jonathan Toews are slated to become unrestricted free agents in
July. Each will draw plenty of interest from playoff contenders if
they agree to waive their no-movement clauses. However, their hefty
$10.5 million cap hits could require the Blackhawks to retain up to
half of their remaining salaries.

Pending UFAs like Max Domi and Andreas
Athanasiou could be enticing to contenders that are seeking affordable
secondary scoring. Both are on one-year, $3 million contracts. Jujhar
Khaira ($975,000 cap hit) could be a good fit with a playoff team
looking for checking-line grit.

The New York Rangers returned to the
playoffs last season for the first time since 2017, reaching the
Eastern Conference Final before bowing out to the Tampa Bay
Lightning. With expectations raised by that performance, general
manager Chris Drury could be active in the trade market.

Drury proved last season that he’s
willing to make moves near the deadline, bringing in rental players
such as Andrew Copp, Tyler Motte, Frank Vatrano and Justin Braun. He
could be busy again this campaign, especially if New York is still
jockeying for a wild-card spot when the calendar flips to March.

Unlike last season, the Rangers aren’t
as flush with cap space, carrying a projected $6.7 million of room. Nevertheless, Drury will likely attempt to find a deal
that can not only improve his club’s chances of clinching a playoff
berth but also stage a run for the Stanley Cup.

The Rangers lack an experienced scoring
right winger and are using Jimmy Vesey, Vitali Kravtsov and
Kaapo Kakko in that role. They could also use a reliable center for
their second line if Vincent Trocheck or Filip Chytil continues to
struggle in that role.

The rebuild continues for the Arizona
Coyotes. General manager Bill Armstrong has been shipping out
veterans for young players, draft picks and prospects since taking
over the job in September 2020. Ilya Lyubushkin, Ryan Dzingel, Johan Larsson, Riley
Nash and Scott Wedgewood were dealt leading up to last
season’s deadline.

Armstrong is attempting to build up his
roster with younger players currently in the lineup such as Clayton
Keller, Matias Maccelli, Dylan Guenther, J.J. Moser and Barrett
Hayton. He also has promising talent such as Logan Cooley and Conor
Geekie in his prospect pipeline.

The Coyotes have 14 picks in the 2024
NHL draft and 10 in the 2025 draft but just seven picks for 2023.
Armstrong could attempt to load up with more picks and perhaps add
some prospects prior to this year’s trade deadline.

He has one big trade chip in
defenseman Jakob Chychrun, who’s been the subject of trade rumors for
some time. Pending free agents such as blueliner Shayne Gostisbehere
and forward Nick Bjugstad could also become trade candidates.

The Toronto Maple Leafs’ last Stanley
Cup was in 1967. Their last playoff series victory was in 2004. This
is a franchise under pressure from a demanding fanbase. General
manager Kyle Dubas’ job could depend on the moves he makes leading up
to the trade deadline.

Dubas hasn’t been afraid to make deals in years past. He brought in Mark Giordano and
Colin Blackwell last season; Nick Foligno, Stefan Noesen, Riley Nash, Ben Hutton and
David Rittich in 2021; Jack Campbell and Kyle Clifford in 2020; and
Jake Muzzin in 2019. Only Giordano, Muzzin and Clifford remain.

The Leafs have a projected $7.9 million in cap space. With Muzzin potentially sidelined
for the remainder of the season with a cervical spine injury, Dubas
could go shopping for a top-four shutdown defenseman or perhaps a
puck-moving right-shot blueliner.

That’s not the only spot in the roster
that Dubas could attempt to address. He might consider adding a
reliable checking line center. Depending on the health of oft-injured
Matt Murray, the Leafs GM could look for an experienced, affordable
third-string goaltender.

Since Jeff Gorton took over as vice
president of hockey operations and Kent Hughes became general manager
last season, the Montreal Canadiens have focused on rebuilding with
youth. That involved being active in the trade market.

From February 14 to March 21, Hughes
traded winger Tyler Toffoli to the Calgary Flames, shipped defenseman
Ben Chiarot to the Florida Panthers, dealt winger Artturi Lehkonen to
the Colorado Avalanche and peddled blueliner Brett Kulak to the
Edmonton Oilers. The Habs GM should be active again in the weeks
leading up to this season’s deadline.

The Canadiens are having a
better-than-expected start this season after finishing dead last
in 2021-22. However, they lack experienced blue-line depth, a
reliable starting goalie and power-play proficiency. Those issues
should prevent them from reaching the playoffs, leading to several pending free agents hitting the trade block.

Sean Monahan could become a valuable
trade target for teams that are seeking a second-line center.
Fellow free-agents-to-be Jonathan Drouin and Evgenii Dadonov will also be
available. Veterans with a year
remaining on their contracts, such as defenseman Joel Edmundson and
winger Mike Hoffman, could also end up getting dealt by March 3.