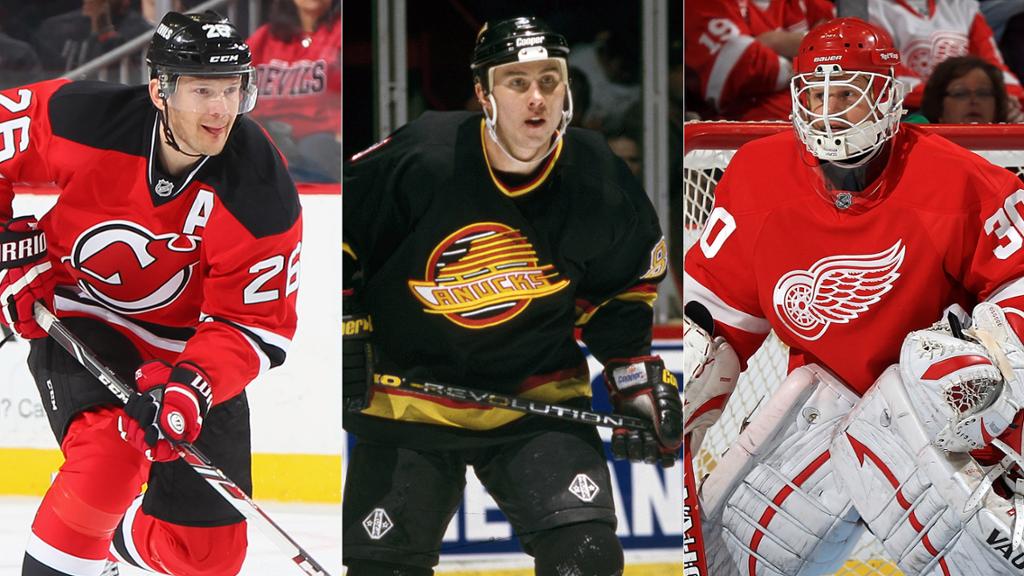 The Hockey Hall of Fame 2022 induction celebration will be held Monday, when Daniel Alfredsson, Roberto Luongo, Riikka Sallinen, Daniel and Henrik Sedin enter as players, and Herb Carnegie goes in as a builder.

Each is a deserving candidate to join the honored members who have gone before them.

But no Hall of Fame weekend is complete without a robust argument about those who are eligible for induction but have yet to get the call from the selection committee.

We asked a panel of NHL.com writers for the player or builder they believe should be in Hockey Hall of Fame.

Here are their selections, in alphabetical order:

Fact: Elias is the greatest offensive player in New Jersey Devils history. Born in the Czech Republic, he was the first European-born captain (2006-07) in Devils history and the first forward to have his number retired by the Devils, a feat that shouldn’t be ignored for an organization known for goaltending and defense. New Jersey was a great defensive team, but when it needed a big goal, Elias was either scoring or setting it up. He holds Devils records in goals (408), assists (617), points (1,025), power-play goals (113), power-play points (333), short-handed points (33), game-winning goals (80) and overtime goals (16) in 1,240 regular-season games. In 162 Stanley Cup Playoff games, he has the most goals (45), assists (80), points (125), power-play goals (21) and power-play points (52) in New Jersey history, winning the Stanley Cup in 2000 and 2003. Elias was able to compete, win the battles and make the big plays for which elite forwards already in the Hall of Fame have been recognized. — Mike G. Morreale, staff writer

The debate regarding Henderson’s potential inclusion has gone on for decades. The pragmatists will argue his NHL stats aren’t heady enough to get him in, and they have a point; he had 477 points (236 goals, 241 assists) in 707 games with the Detroit Red Wings, Toronto Maple Leafs and Atlanta Flames from 1963-80. But from a historical hockey standpoint, it’s Henderson’s heroics during the 1972 Summit Series between Canada and the Soviet Union that deserves consideration. Henderson scored the winning goal in each of the final three games, including the iconic series winner with 34 seconds remaining in Game 8, arguably the most famous goal in hockey history, to give Canada a dramatic 4-3-1 victory in the series. It’s not called the “Hockey Body of Work Hall of Fame.” Moments matter, and none were bigger than Henderson’s goal in 1972 or, for that matter, Mike Eruzione’s goal for the United States against the Soviets at the 1980 Lake Placid Olympics. Both should be enshrined for scoring goals that changed the very nature of the game, not just the score. — Mike Zeisberger, staff writer

The high-scoring right wing is hardly mentioned these days unless someone is on the verge of breaking one of his records. “The Riverton Rifle” was one of the most formidable and feared goal scorers of the 1970s as part of the Philadelphia Flyers’ “LBC line” with Hockey Hall of Famers Bill Barber and Bobby Clarke. He had 666 points (381 goals, 285 assists) in 934 regular-season games, and 69 points (47 goals, 22 assists) in 94 playoff games. A member of Philadelphia’s 1974-75 Stanley Cup championship team, the two-time All-Star (1976, 1980) scored 30 or more goals in a season six times, and 50 or more goals twice. He led the NHL in goals in 1975-76 (61) and won the Conn Smythe Trophy as most valuable player of the postseason in 1976 with 24 points (19 goals, five assists) in 16 games. He remains the only skater to win the award playing for the team that didn’t win the Stanley Cup (the Montreal Canadiens swept Philadelphia 4-0). Leach and Jari Kurri of the Edmonton Oilers are the only players to score 19 goals in one postseason. Leach also holds the record for most goals in consecutive playoff games (10 in 1976). His five goals against the Boston Bruins in Game 5 of the Stanley Cup Semifinals on May 6, 1976, tied him with Edouard “Newsy” Lalonde, Maurice Richard, Darryl Sittler and Mario Lemieux, all Hockey Hall of Famers. Leach received the Order of Canada, one of the nation’s highest civilian honors, in October. — William Douglas, staff writer

Osgood doesn’t get the respect he deserves. He won 401 games, 13th in NHL history, and the Stanley Cup three times, twice as a starter. Had he won another championship as a starter, would you think of him differently? How about the Conn Smythe Trophy as playoff MVP? Well, in 2008-09, he might have been one win short of each. He led the Red Wings to Game 7 of the Cup Final, going 15-8 with a 2.01 goals-against average, a .926 save percentage and two shutouts. Had he won the Vezina Trophy as the NHL’s top goalie, would you think of him differently? He was runner-up to Jim Carey in 1995-96, even though each had the same number of first-place votes (five) from the general managers and better stats than Carey in GAA (2.17 to 2.26) and save percentage (.911 to .906). — Nicholas J. Cotsonika, columnist

For me, this one is easy: Caroline Ouellette. I could go on and on, but let’s start with this. She, like Hayley Wickenheiser and Jayna Hefford, earned four consecutive gold medals at the Olympics, the only three women to ever do so. Wickenheiser and Hefford are in the Hall of Fame. So far, Ouellette is not, though I suspect that will be corrected in the coming years. She won a national championship at the University of Minnesota-Duluth, the Clarkson Cup four times with the Montreal Les Canadiennes, the World Championships six times — she finished second six more times — and is third all-time in international scoring among Canadian women with 242 points (87 goals, 155 assists) in 220 games, behind only Wickenheiser and Hefford. Ouellette is a true giant of hockey, not just the women’s game, and she deserves induction. — Amalie Benjamin, staff writer

Poile has not won the Stanley Cup, and that’s the only knock against him. It’s not enough to keep him from joining his father, Bud Poile, in the Hockey Hall of Fame as a builder. David Poile has been at the helm as a general manager for 40 years, starting in 1982 with the Washington Capitals and holding that role for 15 seasons before he was hired to start the Nashville Predators from scratch. Builder? Poile is exactly that. He constructed the Predators from Day One and has been at it ever since. He didn’t just build a team; he built a franchise and has been there every step of the way as Nashville has become one of the best hockey towns in the United States. Hall of Famer? Poile is the only person who has been a GM for at least 3,000 regular-season games; next is Glen Sather with 2,700. Poile is set to become the first GM to 1,500 wins. Next is Lou Lamoriello with 1,372. His teams have made the playoffs in 29 of his 38 seasons as a GM. That includes 14 straight in Washington. It took the Predators until their sixth season to get in. They’ve missed three times in the past 18. They went to the Stanley Cup Final in 2017. Poile wants that championship to complete his hockey life, but he shouldn’t need it to get into the Hall of Fame with all he’s done. — Dan Rosen, senior writer

The forward had 1,327 points (515 goals, 812 assists) in 1,294 games with the Sabres, New York Islanders, Montreal Canadiens, St. Louis Blues, Dallas Stars and Colorado Avalanche. There are 14 NHL players who had 1,300 or more career points who are in the Hall. Turgeon is the only one who isn’t. He also had 97 points (35 goals, 62 assists) in 109 playoff games. But back to his regular seasons: Turgeon was outstanding, but the nit that many want to pick with him is that he didn’t win many awards. His only one was the Lady Byng Trophy, given to the player who has “exhibited the best type of sportsmanship and gentlemanly conduct,” in 1992-93 with the Islanders. I mean, the guy was one of the best, individual accolades pointing that out to the masses or not. Just seems that if that’s the reason he still hasn’t been inducted into the Hockey Hall of Fame, it’s a shame. — Tracey Myers, staff writer