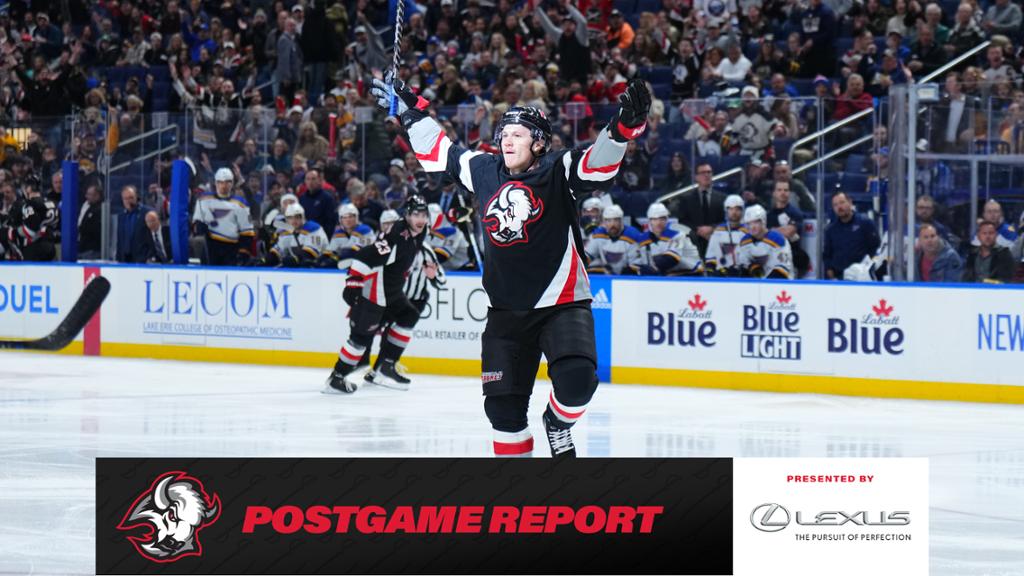 Wearing their new “goathead” third jerseys for the first time, the Buffalo Sabres picked up their second win in as many nights with a 6-2 victory over the St. Louis Blues on Wednesday at KeyBank Center.

Alex Tuch sent a pass behind the net to Skinner, who went top shelf to give the Sabres an early lead 18 seconds into the game.

Video: [email protected]: Skinner scores to put Sabres on the board

Tage Thompson nearly found the scoresheet as he toe-dragged around the St. Louis defense at the 6:18 mark and backhanded a shot off the goal post.

Tweet from @Arda: Tage Thompson is often as fun to watch as Connor McDavid. My goodness. @BuffaloSabres (and the goat head red/black is 🔥)(via @DimFilipovic) pic.twitter.com/zcra8LieyB

The Sabres outshot the Blues 11-8 in the opening period.

The Blues tied things up 53 seconds into the second on a power-play goal from Pavel Buchnevich.

Buffalo jumped back on top after a 3-on-1, which ended with Cozens burying a shot from the left wing, assisted by Vinnie Hinostroza and JJ Peterka.

Olofsson extended the lead on the power play as he one-timed a shot from his favorite spot at the 5:57 mark.

Skinner skated around Justin Faulk and backhanded a shot past Jordan Binnington to score his second of the game and the Sabres’ second power-play goal with 6:59 remaining in the period.

Just minutes later, Luukkonen robbed Vladimir Tarasenko in front of the net to keep Buffalo up 4-1.

The Blues thought they inched closer with a tally at the 6:11 mark, but the goal was overturned after an offside challenge.

The Sabres added to their lead when Quinn muscled home a wrist shot with 7:16 remaining. He netted another with 1:17 left for the first multi-goal game of his career.

Brayden Schenn closed out the scoring with 1:04 to go.

1. With a goal scored 35 seconds in on Tuesday night and a tally 18 seconds in on Wednesday, the Sabres scored an opening-minute goal on consecutive days for the first time in franchise history, according to NHL PR.

Skinner’s first goal also marked the third time in team history, and the first time since December 19 and 21, 2006, that the Sabres have scored an opening-minute goal in the first period of consecutive games, according to Sabres PR.

2. With his two goals tonight, Skinner has recorded seven points (4+3) in the past two games.

3. Tuch assisted on both of Skinner’s goals to extend his point streak to five games. He has registered 10 points (3+7) in that timespan.

4. Cozens is riding a point streak of his own with four points (1+3) in the past three games.

5. Buffalo will be back in the black and red on December 4 against the Sharks. Tickets are available here.

The Sabres will wear their Reverse Retro jerseys for their next game when they face the New Jersey Devils on Friday at KeyBank Center. Tickets are on sale now.