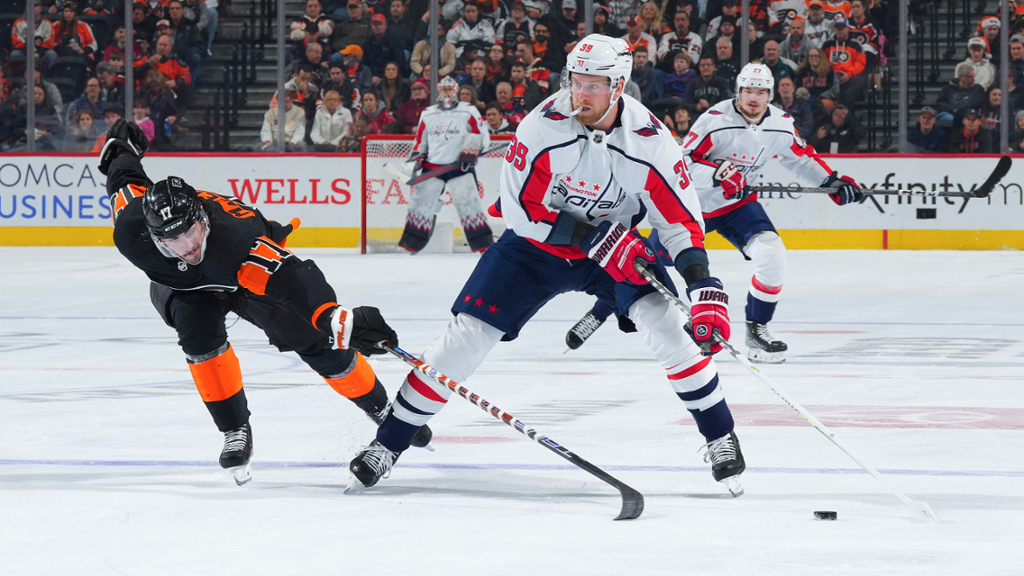 In the final game of a five-game homestand, the Philadelphia Flyers lost to the Washington Capitals, 4-1, at the Wells Fargo Center on Wednesday evening. The game was tied at 1-1 heading into the third period before Washington notched a go-ahead goal and a pair of empty-net tallies.

The Flyers finished the homestand with a 2-3-0 record. The Capitals completed a six-game road trip with a 3-2-1 mark.

Kevin Hayes (9th goal of the season) notched a power play goal at 15:46 of the first period. For just the fourth time all season, Philly took a lead to the first intermission. Washington’s T.J. Oshie (5th) answered with a power play marker of his own at 3:51 of the second period. The score remained tied until near the midpoint of the third period.

In the final stanza, Dylan Strome (6th) scored on a deflection at 9:19 to put Washington ahead. Alex Ovechkin scored two empty net goals (14th and 15th) at the 18:25 and 19:51 marks to turn it from a one-goal victory for Washington to a three-goal margin.

Carter Hart stopped 23 of 25 shots in a losing cause for the Flyers. Charlie Lindgren earned the win for Washington, making 29 saves on 30 shots.

James van Riemsdyk returned to the Flyers after a 20-game absence due to a broken right index finger. He recorded two shots on goal and was credited with one hit in 12:47 of ice time.

The game was very much up for grabs in the third period. Finally, after Sedlak failed on an opportunity to get the puck out of the defensive zone, it was held in by ex-Flyer Erik Gustafsson. A John Carlson shot attempt seemed to be headed wide of the net to the long side, but Hart stuck out his stick. Suddenly, Strome got a stick on the puck, radically changing the trajectory as it beat Hart to the glove side instead. The Flyers were never able to draw even. They had two near misses on a power play.

The Capitals had their first power play at 11:05 after Nick Seeler was called for hooking Evgeny Kuznetsov. The Flyers did a strong job on the kill,

Philly went back to the power play at 14:16 when Conor Sheary was called for hooking Sanheim, For the third straight game, the Flyers scored a power play goal. Hayes claimed the puck after a missed shot attempt by Konecny. Hayes found room to move above the circles and, wristed a shot from a few feet inside of center point that found its way through traffic and into the net. DeAngelo got the secondary assist at 15:46.

Ovechkin twice came within a whisker of tying the game late in the period. At 16:30, he stopped in close by Hart. A few seconds later, Ovechkin put a shot off the crossbar. The Caps ended up with a power play as Sedlak was called for tripping.

The Flyers killed off Washington’s second power play but got themselves right back into penalty trouble when MacEwen was sent off for tripping Trevor van Riemsdyk at the 19:49 mark. The Capitals took 1:49 of carryover power play time into the second period.

2) The Flyers exhibited tight checking in the first period. Apart from taking three minor penalties in the opening 20 minutes and some errant passing and shooting, it was a solid first period for Philadelphia.

The Flyers had a 7-4 shot on goal advantage in the first period. Shot attempts were 17-14 in Philly’s favor. Scoring chances were 9-7 in Washington’s favor (3-3 in high danger shots). The Flyers played a very physical period, outhitting the Caps by a credited 15-3 margin.

3) The Flyers killed the remaining 1:49 on the MacEwen penalty. Hart made a great save on an Oshie one-timer. A mere 31 seconds after MacEwen exited the box, the Flyers found themselves shorthanded yet again; the fourth time in the first 22:21 of play. James van Riemsdyk was called for a marginal tripping penalty on defenseman Nick Jensen.

The Flyers were playing with fire and eventually got burned on this kill. A pair of Kuznetsov shot attempts were blocked by Konecny. An Oshie shot attempt from the left hash marks was blocked by Ristolainen. Sedlak blocked an Ovechkin shot from the top of the left circle but broke his stick in the process. This opened the ice up for Washington. Dylan Strome passed to Oshie in the center slot, and Oshie hammered an explosive shot over Hart’s glove into the top part of the net at 3:51. The assists went to Strome and Kuznetsov.

At the 6:19 mark, Hart stopped Kuznetsov on a Grade A chance from the slot.

As the second period progressed, neither team was able to generate much of a sustained attack. Pucks were bobbled several times when there seemed to be a chance to make a play. The Flyers in particular had trouble getting into any sort of offensive rhythm. A lot of shot attempts were fired but relatively few got on net for such a high volume of attempts.

4) Second period shots on goal were 12-8 Washington. The Caps had 30 shot attempts to 20 for the Flyers. Scoring chances were 12-6 Capitals (9-1 high-danger edge for Washington).

5) The Flyers had the match in “win a period, win the game” territory but the team has had a lot of trouble in recent years being the club to find a way to win such games. Philly outshot the Caps, 15-11, but Washington generally did a good job at preventing high-danger looks (4-3 high-danger opportunity edge for the Flyers).

The failed Sedlak clearing chance and the eventual Strome goal (see “Turning Point”) still allowed the Flyers 10:41 of time on the clock to come up with a tying goal, but they were unable to do so.

The closest the Flyers came: At the 11:01 mark, Gustafsson was called for delay of game for sending the puck over the glass from the defensive zone. Washington argued that the puck deflected off Hayes’ stick, to no avail. On the ensuing power play, Frost made a gorgeous tape-to-tape pass from the right boards atop the circle to find Hayes going to the left post. Hayes got there first but tucked the puck off the near-side post.

Later, with 7:21 remaining on the clock, Lindgren came up with a Frost deflection from the lower-mid slot. The Flyers jammed away at the puck but couldn’t get it to go.

With time ticking down below 4:40 remaining, Tippett and Frost blocked shot attempts by Gustafsson and Carlson. Hart then made a save on Marcus Johansson from close range to keep the deficit at 2-1.

Konecny and Tippett had had momentary looks at the net but were unable to solve Lindgren. The Flyers pulled Hart for an extra attacker in the final two minutes. Philly has been a very poor 6-on-5 team the last few years — opposing empty net goals often feel semi-automatic.

At 18:25, Ovechkin was able to outmaneuver DeAngelo and guide an empty netter home from above the right circle. The assists went to Anthony Mantha and Carlson. At 19:51, Ovechkin skated to puck to the net and tapped in for another ENG (the assists were credited to Kuznetsov and Conor Sheary).

Konecny took exception to what he seemed to think was showboating by Ovechkin on the latter goal. He was dispatched on a 10-minute misconduct with nine ticks left on the clock before the final buzzer.